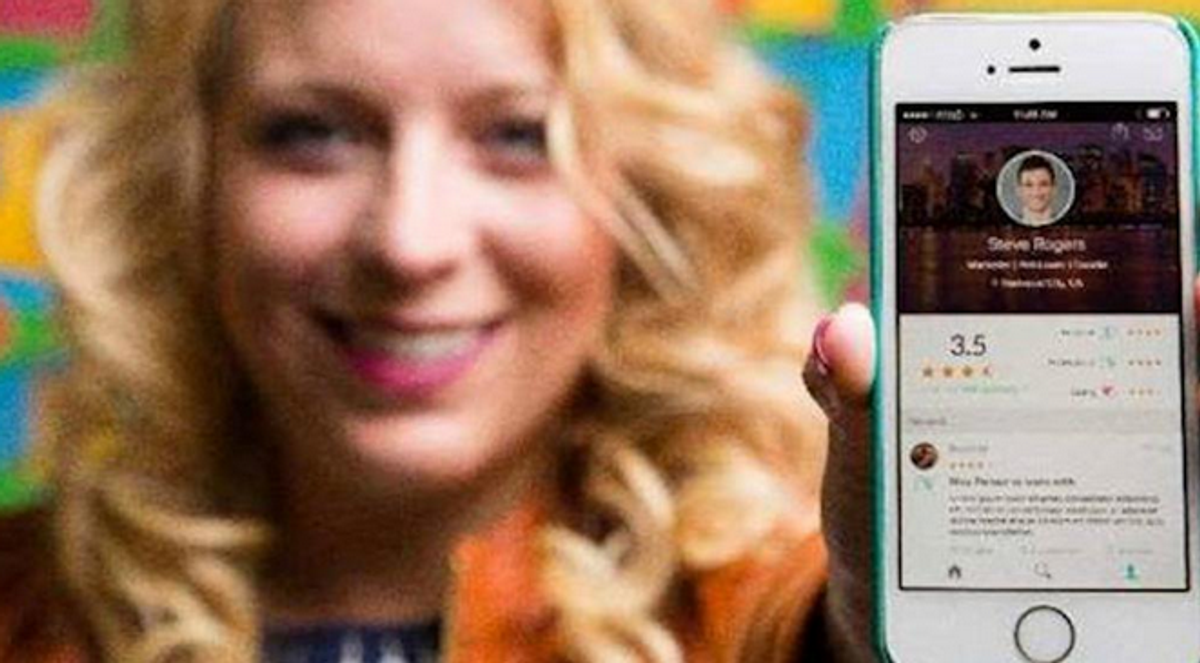 NEWS:   A forthcoming app called "Peeple" will purportedly function as a ratings service of private individuals.

On 30 September 2015 social media users began buzzing about a purported new app called "Peeple" and proposed functionality (i.e., "to assign reviews and one- to five-star ratings to everyone you know") that was almost universally scorned by its potential user base.

Before Peeple's name was splashed across tech blogs and social networks on that day, the app was virtually unknown. So abrupt was its conceptual introduction that a Google search restricted to three days before the press brouhaha revealed virtually no mentions of Peeple. In fact, the only technology known by that name was linked to an entirely unrelated Kickstarter campaign to fund a "smart peephole."

But on 30 September 2015, the Washington Post published an article titled "Everyone you know will be able to rate you on the terrifying ‘Yelp for people’ — whether you want them to or not." Its claims caused immediate concern among social media users for obvious reasons — the Peeple app as described seemed to appeal to almost no one (while threatening to attract unwanted attention to nearly everyone):

When the app does launch, probably in late November, you will be able to assign reviews and one- to five-star ratings to everyone you know: your exes, your co-workers, the old guy who lives next door. You can’t opt out — once someone puts your name in the Peeple system, it’s there unless you violate the site’s terms of service. And you can’t delete bad or biased reviews — that would defeat the whole purpose.

“People do so much research when they buy a car or make those kinds of decisions,” said Julia Cordray, one of the app’s founders. “Why not do the same kind of research on other aspects of your life?”

One aspect of Peeple that commentary sharply focused on was the app's built-in feature of disabling the ability to opt out of it. The app's creators said anyone was welcome to submit a "review" of any private individual, armed only with a phone number. Moreover, the app's promoters exhibited a worrying lack of regard for questions about how Peeple's functions might affect folks who were either endangered by (e.g., stalking victims) or otherwise uncomfortable with being rated publicly:

It’s inherently invasive, even when complimentary. And it’s objectifying and reductive in the manner of all online reviews. One does not have to stretch far to imagine the distress and anxiety that such a system would cause even a slightly self-conscious person; it’s not merely the anxiety of being harassed or maligned on the platform — but of being watched and judged, at all times, by an objectifying gaze to which you did not consent.

“That’s feedback for you!” Cordray enthuses. “You can really use it to your advantage.”

Another near universal point of contention was what was perceived as a cavalier attitude on the part of Peeple's creators with respect to specifics about the app. The Washington Post appended the following update to their article, suggesting that Peeple was ambiguous or uncertain at best about how key functions would be administered:

Update: This story has been updated to remove a reference to Peeple users being unable to remove inaccurate reviews. While Peeple co-founder Julia Cordray told the Post in an interview that users would not be able to contest reviews after they went live, she later clarified by email that users can “report anything they deem inaccurate” to the site.

Predictably, Peeple's Facebook page was beset with users voicing their objection to a social media profile to which they did not consent and from which they would not be able opt out. One Facebook user pressed Peeple for details about what some called a "harassment engine," primarily an unsettling assertion that those who received bad reviews would be directed to engage with their critic within a short window of time:

Peeple's response appeared to confirm such a conversation would be required to prevent the content from appearing on the app:

[W]e have a dispute resolution that has all negative reviews go into the inbox of the person being reviewed. Then there is a 48 hour timeline where you can work it out with the person. If your profile is unclaimed only positive reviews go live. Please refer to our FAQ on our website.

Others alleged Peeple's creators were deleting unwanted comments from their page (confirmed by the page itself in a reply), thereby illustrating fundamental flaws in the app:

The fact that you're deleting comments on this post is EXACTLY the problem we have with your app. You don't like people coming online to publicly give you our opinions? Interesting. The entire Peeple premise seemed to be (if anything) vague and confusing. That stands to reason, as the entire concept appeared to have been conceived as late as 12 August 2015. The @PeepleforPeople Twitter account seemed primarily geared to promoting video content involving Peeple co-founders Julia Cordray and Nicole McCullough, with virtually no independent verification of the app's actual existence amid a regular stream of YouTube videos:

A tidbit buried in the tail end of the Washington Post article similarly hinted at the entire process being oriented more to Cordray's "publishing [of] a reality Web series about the app’s process." While the site was crawled in late December 2014, the earliest content on it appeared on 1 August 2015 (and simply displayed a sparse landing page). Mentions of Peeple began appearing in late September 2015, on CBC and the Calgary Herald. Prior to that, Cordray appeared devoted to her recruiting business CareerFox (which was active until early 2015); her LinkedIn profile lists her as head of both companies.

A trademark application was filed for Peeple on behalf of Peep, Inc. in the United States in February 2015, and its status is suspended. Similar records filed with the Canadian Intellectual Property Office can be viewed here, here, and here.

McCullogh appeared to have no online footprint of which to speak before Peeple went viral. Cordray made her first mention of Peeple on Twitter just as the app was hitting Canadian media outlets in September 2015 (but not even tacitly prior to that point):

Similarly, Cordray was featured in a 19 May 2015 Calgary Herald article on entrepreneurship in Alberta and neglected to mention (or even hint at) the development of Peeple:

Julia Cordray, chief executive of Career Fox Inc. and 96 Talents, works in the area of recruitment. She said the current economy can lead people to look for opportunities in entrepreneurship.

“I have seen an increase in people being able to reinvent themselves by starting up new companies from anything to apps to painting companies to yoga studios. I’m excited for them to follow more of their passions and buck the norms of 9 to 5,” she said.

Cordray's web site presented an entirely different description of Peeple than the one she provided to media outlets (but a copy of her site crawled on 1 August 2015 again did not mention her purported development of Peeple):

My mission is to re-invent and innovate the recruitment industry as a whole. I began my recruitment career by building, Career Fox; aimed at finding dream jobs for employees. Career Fox developed a proprietary recruitment process that leads to a 96% successful placement rate. I evolved the business into providing employers with an incredibly effective solution for finding and securing talent for their business by creating Canada's first full service recruitment software; 96 Talents. Now we’ve innovated again and made Peeple, which is the next generation of recruitment in an app where you can find talent geographically through key word searches and see how talented they really are professionally as commented on and rated by their peers.

It seemed one thing about Peeple was clear: the premise of the purported app itself was so frightening that few who learned about it stopped to check McCullogh and Cordray's receipts. The diversion created by dumping news of a new, privacy-invading social media function sufficiently diffused any checking into whether Peeple was likely to get off the ground anytime soon. As it stands, the concept of Peeple was virtually non-existent until August 2015, and its founders didn't appear to take into account that another app of the same name existed previously.

Any and all "work" on the app was primarily documented via YouTube video before September 2015, and most attempts to discern whether or how the app worked were met with vague answers about "beta testing" in November 2015. No details were released about the app's technical specs, and again, its invasive nature sparked so much debate that the story reached viral mass almost instantly with no corroborating information provided. Which is not to say Peeple isn't going to hit the app store in November, but it hasn't been in production very long (if it's not a hoax), and its founders appear to have cobbled together a PR campaign in a matter of weeks with no detail backing it up.

Finally, neither McCullogh nor Cordray appeared to have any relevant background in app building. McCullogh maintained a low profile prior to Peeple's launch, and Cordray billed herself solely as recruiter up to and until August 2015. It's possible the pair hired a development team through their modest and recent purported venture funding, but an app of the scale they described seemed unlikely to materialize in the 90-day timeframe cited by their YouTube videos. If Peeple was in the works prior to August 2015, Cordray neglected to mention it (even in a late May 2015 article about her business ventures).

Update: As of 4 October 2015 Peeple's Facebook and Twitter pages were inaccessible or deleted, and an Instagram account linked by their site was set to private. On the same day, Cordray published a note to LinkedIn titled "I Became a Trending Topic for the Wrong Reasons. Here's Why We need Peeple, the Positivity App I'm Building."

In that writing, Cordray denied Peeple was ever designed to carry negative feedback and claimed:

Except, there is one thing I must tell you; this has always been a positivity app ... Peeple is focused on the positive and ONLY THE POSITIVE as a 100% OPT-IN system. You will NOT be on our platform without your explicit permission. There is no 48 hour waiting period to remove negative comments. There is no way to even make negative comments. Simply stated, if you don’t explicitly say “approve recommendation”, it will not be visible on our platform.

I think we are going to have more positive than negative, but you can't please everybody so ... I think it's important to know the negative too. I wouldn't want this app to just be positive. We want to know 'did he steal from you? Did she steal from you? Were they abusive? Um ... do they have anger issues? Do they lie all the time? Are they narcissistic?' I mean, these are the things that are more valuable in knowing versus little egocentric things. We don't live in a fairytale land. This isn't candyland where we just want to know the best in everybody. I think this app does really help to know and find the best in each of us and the good in each of us, but it would be pointless if it was all positive.