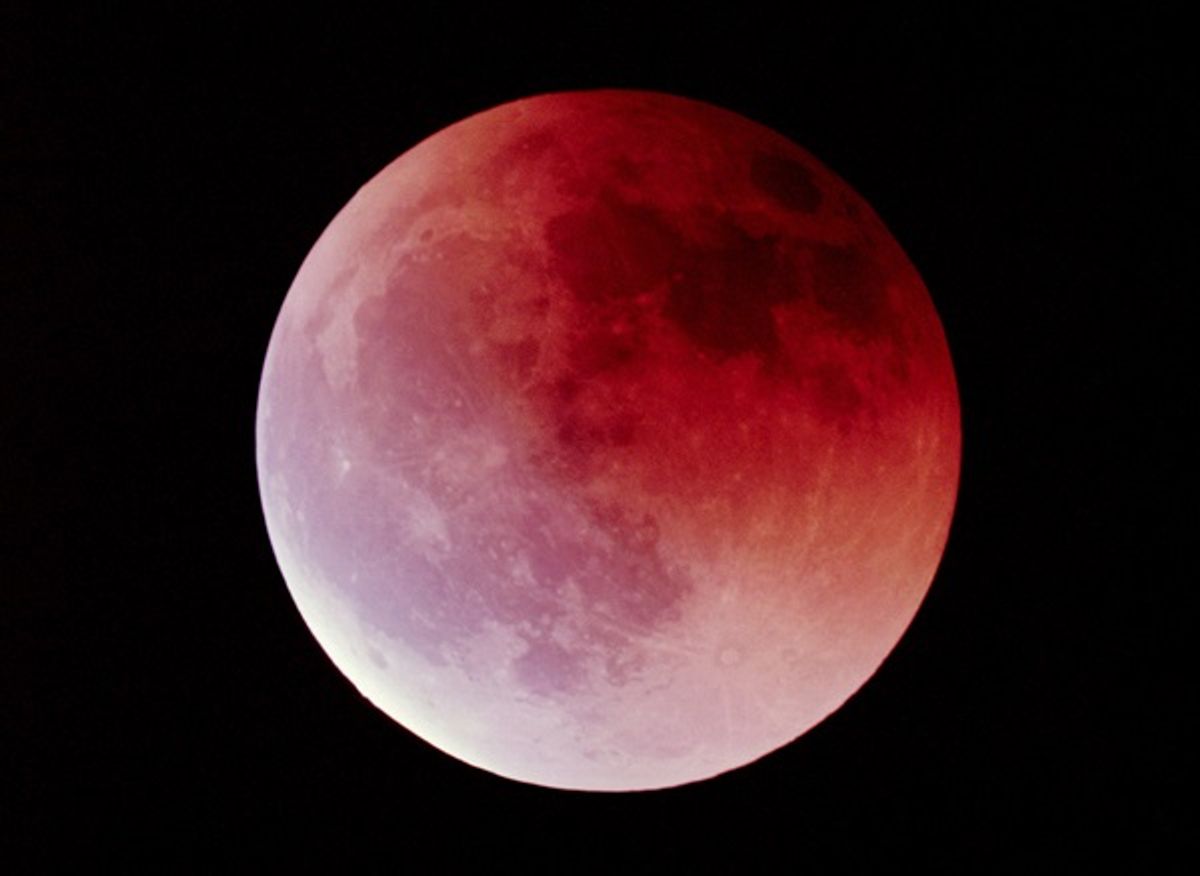 NEWS:   Tonight, providing weather conditions in your area don't interfere, you'll be able to see the uncommon combination of a total lunar eclipse that is also a supermoon.

A "supermoon" is a full moon that coincides with perigee, or the point of the moon's orbit (which is not a perfect circle) at which it comes closest to Earth. A "supermoon" can appear approximately 14% larger and up to 30% brighter than other full moons to observers on Earth:

The combination of a total lunar eclipse and supermoon hasn't taken place since 1982 and won't happen again until 2033, and the eclipse of 27 September 2015 will mark the end of a tetrad: a series of four total lunar eclipses, each occurring six months after the previous one, with no partial lunar eclipses falling in between.

Total lunar eclipses also create the phenomenon of the moon temporarily appearing to bear a deep reddish hue, referred to by some as "blood moon." This is because at the height of the eclipse (or totality), the moon won't completely disappear from sight. Instead, sunlight bent through the Earth's atmosphere will illuminate the moon, with the shorter wavelengths of the visible electromagnetic spectrum (violet, blue, and green) being absorbed by Earth's atmosphere, and only the longer red wavelengths reaching the lunar surface and reflecting back to observers on Earth. (The same phenomenon also creates the vivid red sunsets we see from time to time).

In the Northern Hemisphere, this full moon we also be what is known in folklore as a "Harvest Moon," the name given to the full moon that occurs closest to the autumnal equinox (the beginning of Fall), which fell on September 23. Harvest moons are known by that name in part because they can sometimes look like large orange pumpkins in the sky, although the Harvest Moon isn't necessarily either the biggest full moon of the year nor more pumpkin-colored than other full moons.

Weather permitting, the total lunar eclipse will be visible after sunset to those viewing it in most of North America and all of South America, but watchers in Europe, Africa, and the Middle East will have to be awake after midnight and before sunrise to view it.

Unfortunately, weather forecasts aren't favorable for about one-third of the United States. Clouds and rain are predicted in New York, Texas, the Ohio River Valley, the Appalachians and parts of the Great Lakes.

A detailed schedule of times to see the lunar eclipse can be found via the eclipse calculator at TimeandDate.com.