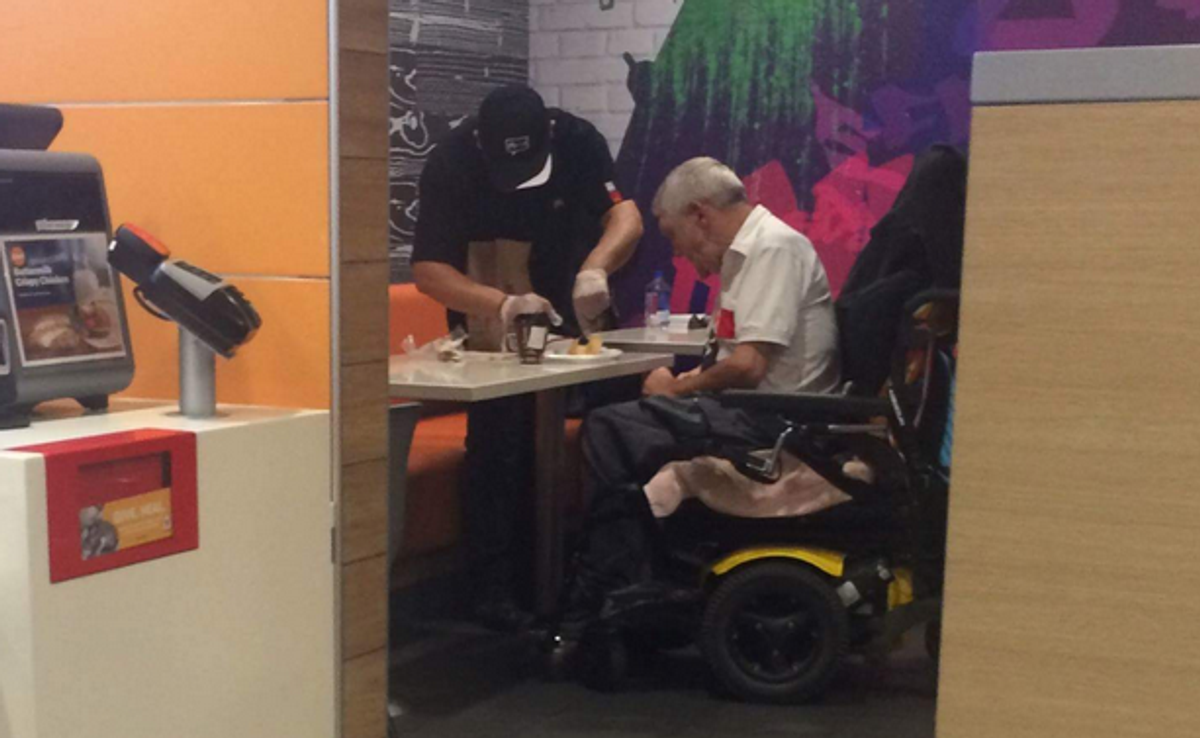 On 16 September 2015, Facebook user Destiny Carreno published a status update urging fellow users to share her eyewitness account of an interaction between a disabled patron and a McDonald's employee identified only as "Kenny":

Seeing this today brought tears to my eyes! Compassion has NOT gone out of style.

Today I made a quick stop at McDonald...

The status update proved very popular with Facebook users, among whom it was shared upwards of a quarter of a million times. The appended image was similarly well received on Reddit, generating lengthy comment threads on the subreddits r/aww and r/humansbeingbros.

The owner of the McDonald’s where the photo was taken, Rod Lubeznik, said in a statement the company is very proud of the employee, who they identified as Kenny. He added the restaurant chain is “overwhelmed by the positive response [Kenny] has received for his compassion and kindness.”

“It’s a true testament to who Kenny is, and a reminder to us all that one seemingly small act of kindness can touch the hearts of so many,” the statement read.

Lubeznik said the restaurant planned to recognize Kenny during a rewards presentation.

A video published alongside the article identified the customer as 56-year-old Dan Garringer, who has cerebral palsy and said that he visits the Union Station McDonald's on a weekly basis and receives consistently "wonderful" treatment:

The photograph also circulated on entertainment blogs, on one of which a reader who identified himself as Jim Haptonstahl published a comment providing additional detail on behalf of Garringer:

The individual with disabilities being helped by this generous & helpful McDonald’s employee is Dan Garringer, who happens to be served by UCP Seguin of Greater Chicago, where I’ve worked for the past 25 years. While Dan has cerebral palsy, he has worked his entire life to be as independent as possible, accessing & fully participating in the community.

Still, he and others with disabilities depend to varying degrees on the assistance of compassionate citizens like the McDonald’s employee in this wonderful story. Dan doesn’t have an intellectual disability, but his cerebral palsy poses a constant challenge. In 1993 he and Clarina, his wife of 27 years who passed away last year, moved into in a UCP Seguin group home. He receives regular staff support at his residence, while he also participates in life skills and other training programs during the day at UCP Seguin’s Carr Center in Cicero. He is a charter member of the UCP Seguin Bocce Ball team. Dan is more than capable of using the Metra & other public transit to traverse the community…that’s his prerogative, & he is determined to be a full member of his community.

Dan has been overwhelmed by the immense reaction to this story. But he’s good with it, if the story promotes greater acceptance and inclusion of people with disabilities in the mainstream of society. He is a writer who was featured in his own local newspaper column for more than a decade. Dan used the column to relate his experiences in the community very much like this…and many times the opposite of this, as he was faced with discrimination, insults, and worse. He has been an advocate for the rights of people with disabilities.

So again, if this story promotes compassion for and understanding of individuals with disabilities, he’s on board. He was featured in an NBC Chicago news story Thursday evening in which he had the chance to tell his own tale. He expressed his sincere gratitude for Kenny, the McDonald’s employee in the photo, and others like him who have followed their better human instincts to be kind, and helpful, and supportive. Kenny was given special recognition by the owner/operator of the McDonald’s. In the end, this is a story of an authentic act of kindness…and that’s pretty cool.

Seeing this today brought tears to my eyes! Compassion has NOT gone out of style.

Today I made a quick stop at McDonald's after work. As I waited in line to order, an elderly handicapped gentleman wheeled himself over to the cashier in front of me. From what I perceived, the gentleman may have had a case of quadriplegia, the same medical condition my uncle has.

The man politely tried to ask the cashier something and it took him a few tries before either of us could understand he was saying "Help me please". Neither of us knew what help he needed, and the cashier suggested a few things before he figured out the gentleman needed help cutting and eating his meal.

To be honest, I thought the cashier wasn't going to help, especially during rush hour in downtown Chicago, but to my shock, he shut down his register and disappeared from view....

Not to get away from helping him, but to wash his hands and put gloves on! I had to stick around and see how this would play out, especially since it hit me so close to home with my own uncle.

The cashier came out from the kitchen, sat down, and began cutting the man's meal and helped him eat.

At that point, the tears started to gather in my eyes. My heart was so appreciative for what he did. I couldn't contain my emotions in the crowded restaurant.

This employee, who put everything on hold for this man, went above and beyond his responsibilties to help this handicapped customer out. That was the kindest and most humble thing I had ever seen.

How many shares and likes can Kenny the cashier get for his awesome service for those in need?