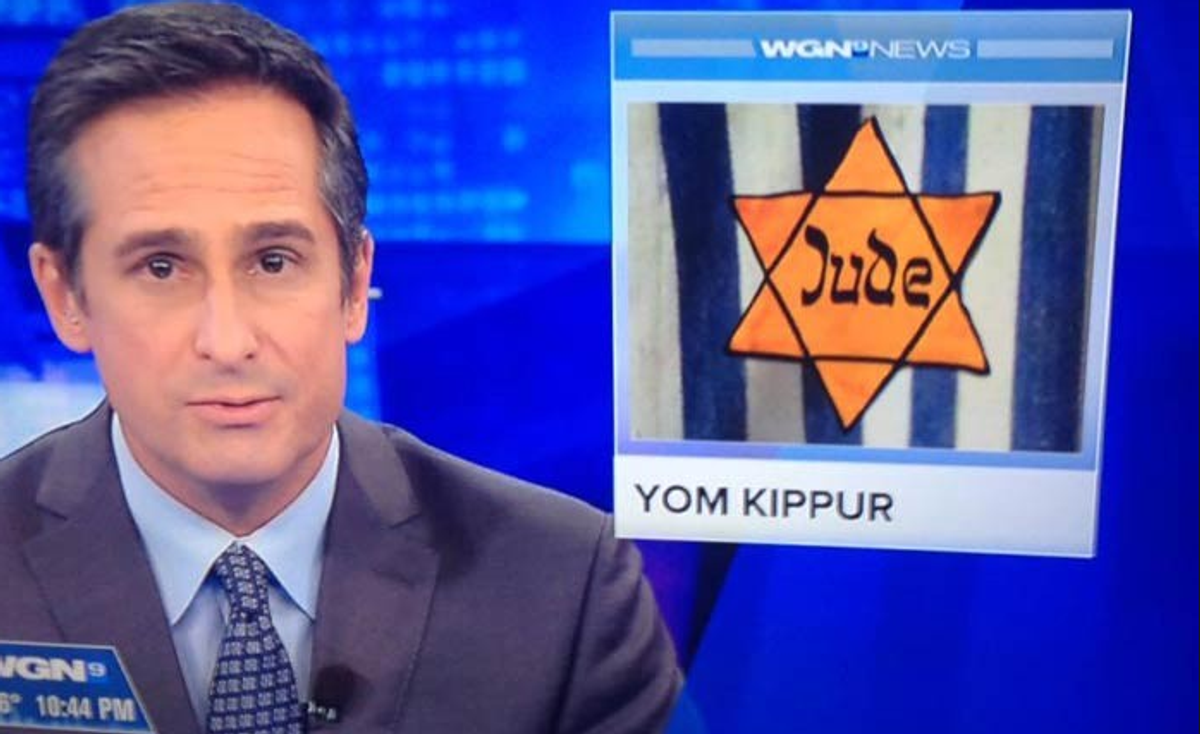 NEWS:   Chicago TV station WGN issued an apology after a Holocaust-related graphic was used in a Yom Kippur segment.

On 22 September 2015 Chicago TV station WGN aired a brief segment on Yom Kippur (the Jewish Day of Atonement) during the program "WGN News at Nine," inadvertently using Holocaust-related imagery in a manner that was seen as insensitive by some viewers.

On screen during the segment in question, a graphic displayed behind the anchor included a yellow Star of David which bore the word "Jude" (a larger practice associated with Nazi Germany and described by the Holocaust Memorial Center on a page titled "Holocaust Badges").

Holy crap, @WGNNews, this is your stock photo for a Jewish holiday?? Nobody thought that's a bad choice of photo? pic.twitter.com/z7BNuvGybS

Others objected to the characterization of the error as merely "offensive," explaining:

In truth, when I saw the image used by WGN-TV, I had a different reaction. The word that comes to mind isn’t offensive. Maybe horrific would work. Or terrifying.

Not long after the segment aired, WGN acknowledged outcry via Twitter (and the user who published the later-widely shared tweet responded):

We are truly sorry for inadvertently using an offensive image in our Yom Kippur story. We apologize and deeply regret the error.

To @WGNNews' credit, the on-air apology was quick. Let this be a good lesson to all us editors/producers who pick photos on tight deadlines.

On 23 September 2015, WGN issued an apology, accepting full responsibility for the oversight:

Last night we ran a story to recognize Yom Kippur, the Jewish Day of Atonement. The artwork chosen to accompany the story came from a graphics image bank. Regrettably, we failed to recognize that the image was an offensive Nazi symbol.

We are extremely embarrassed and we deeply apologize to our viewers and to the Jewish community for this mistake.

Ignorance is not an excuse.

Please know we are reviewing our in house policies and changes have already been made to make sure a hurtful oversight like this never happens again.

Thank you for your understanding. We promise to do better.