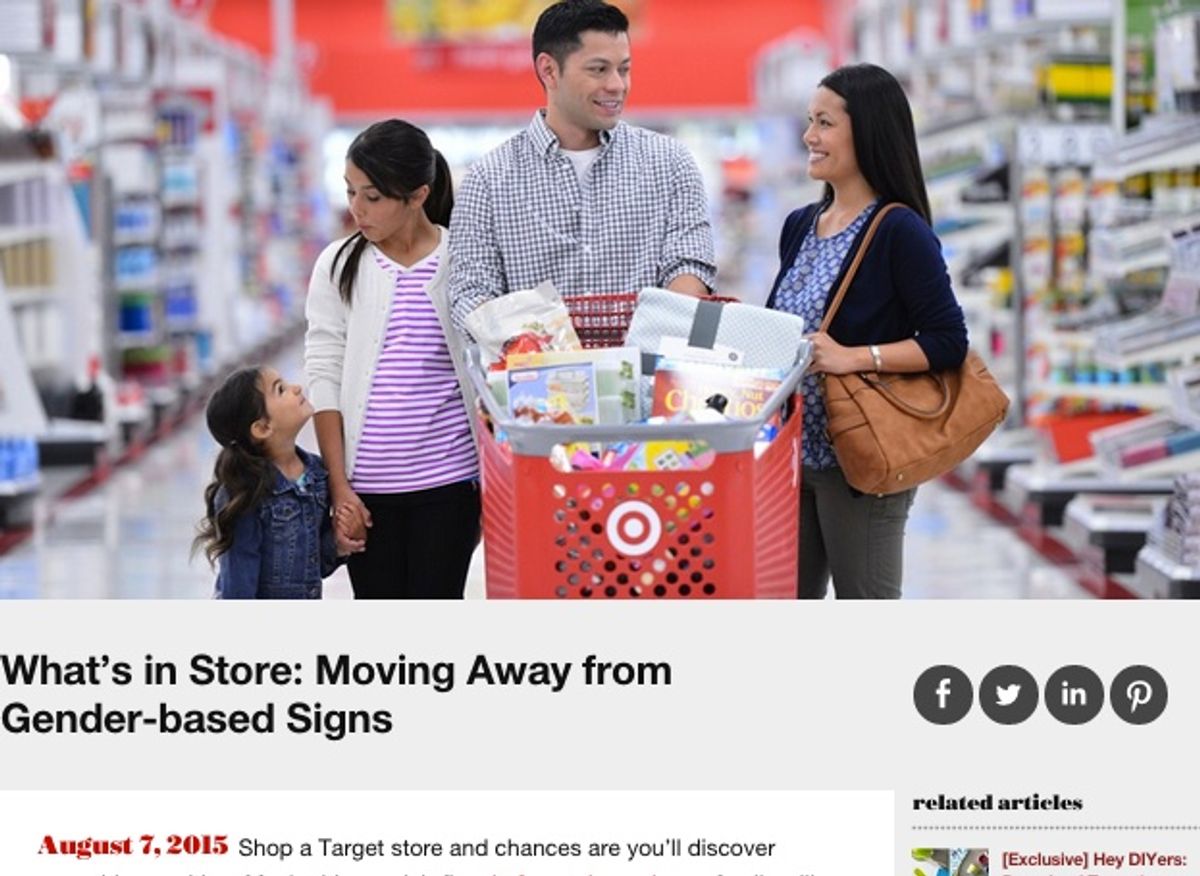 On 7 August 2015, the Target retail chain published a press release to their corporate blog A Bullseye View titled "What's in Store: Moving Away from Gender-Based Signs." The blog post described the store's signage and explained the company's move away from providing gender-based signage (and other gender indicators) for items in the toys, home, and entertainment categories:

We never want guests or their families to feel frustrated or limited by the way things are presented. Over the past year, guests have raised important questions about a handful of signs in our stores that offer product suggestions based on gender. In some cases, like apparel, where there are fit and sizing differences, it makes sense. In others, it may not. Historically, guests have told us that sometimes — for example, when shopping for someone they don’t know well — signs that sort by brand, age or gender help them get ideas and find things faster. But we know that shopping preferences and needs change and, as guests have pointed out, in some departments like Toys, Home or Entertainment, suggesting products by gender is unnecessary.

We heard you, and we agree. Right now, our teams are working across the store to identify areas where we can phase out gender-based signage to help strike a better balance. For example, in the kids' Bedding area, signs will no longer feature suggestions for boys or girls, just kids. In the Toys aisles, we'll also remove reference to gender, including the use of pink, blue, yellow or green paper on the back walls of our shelves. You'll see these changes start to happen over the next few months.

Target's planned removal of gender-based merchandise displays followed a larger national debate about gender identity, and a 1 June 2015 tweet sent by shopper Abi Bechtel has since been referenced as being partly responsible for bringing the matter to the retailer's attention:

Don't do this, @Target pic.twitter.com/cfh3cp5Nqa

In an 8 August 2015 interview, Bechtel said she didn't expect such a large response to her tweet:

I didn't expect it to become the center of this entire discussion about gender and the way toys are marketed. But Caitlyn Jenner's pictures had just come out. And the Supreme Court's ruling on same-sex marriage came out soon after. So there was a whole lot of discussion about gender and gender roles anyway. The tweet just landed at the right time.

Although Target did not post information to their Facebook page about changes to gender-based merchandising, a number of outraged users took to the retailer's social media pages to express their disapproval of Target's announcement. The following string of comments (from an unrelated thread on Target's page) illustrates a sliver of the outpouring:

I always shopped at Target, but as today I will not step foot in their stores, I have Grandchildren I always bought for, and I will not be forced to turn them gay. I am so offended with what these store are doing, telling us dress your daughter like a boy, heck better yet dress your son like a girl, sounds stupid right, because it is, leave things the way they were.

You're folding to the p.c. police. I am boycotting.

Target, this will cost you. I'm going to make sure of it. I have a plan to retaliate against you for catering to sexual deviants. I intend to seriously damage your financial security by taking customers away from you.

Interspersed amid the backlash were some customers lauding the decision and pleading for calm:

My son and I did some shopping at Target today, and I promise the experience didn't leave him scarred or questioning his sexual identity. In fact, he's pretty thrilled that he scored some new coloring books and a Minion hoodie (which was on sale, so score!). Can everyone calm down already? It's a matter of taking a couple of signs down, not mixing clothing and hygeine products in an effort to convert anyone. We walked out of Target as the same people we were when we walked in, and I can almost guarantee that everyone else will too.

The top comment (proposing a boycott) in one of the most active threads received a response from a Target rep:

The only way to stop this is to boycott the store. I'm not even addressing the toy thing. What about the clothes section. Is there one section. I guess there will be a kids section, and an adult section for adults. Bras and jock straps same isle.

We understand your concern. The changes only apply to the two areas of the store where we previously had specific references to gender. We are not making any changes to our Mens', Womens', Boys', Girls', or Baby sections. For more details on our changes please read this: https://corporate.target.com/article/2015/08/gender-based-signs-corporate Goodnight!

On Twitter, Target responded to another customer's positive feedback with the following:

@PicturePro1 Thanks for the support. Keep an eye out for the updated signage in your local store.

However, Target has yet to address any tweets critical of the company's move away from gender-based merchandising.