McDonald's is trying out some self-service kiosks in U.S. locations, but not as a response to an increase in the minimum wage. 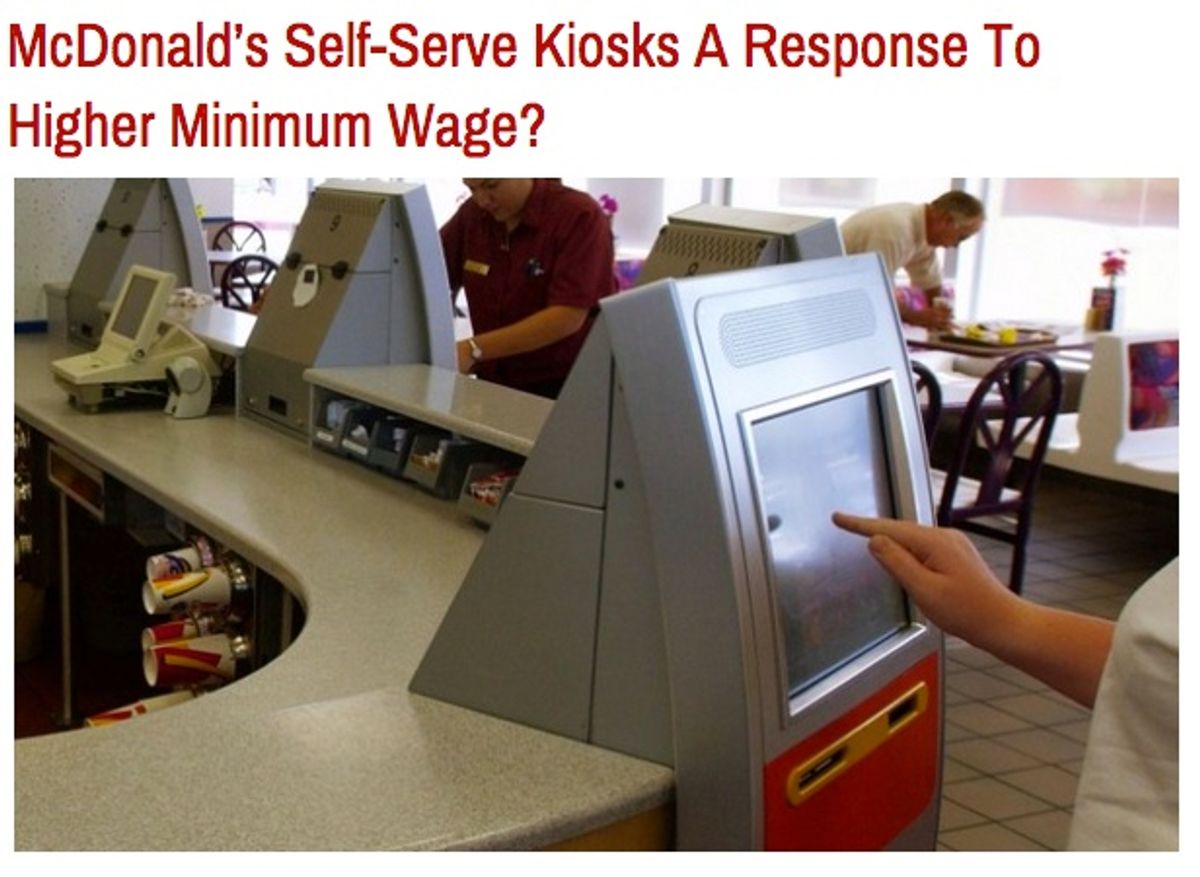 Amid a debate about increases in the minimum wage of up to $15 in some parts of the U.S., the web site BuzzFeed published an article about the McDonald's fast food chain trying out some self-service ordering kiosks. That article (which consisted largely of animated GIFs) explained that the success of McDonald's kiosks in Europe had inspired the chain to consider bringing them to the United States:

Fast food chains are exploring new ways for customers to order their meals without having to interact with a cashier. Labor costs are rising and consumers are demanding ever faster, more convenient service. At McDonald's, self-service kiosks are popping up in restaurants in the U.S. after the burger chain saw some success with the machines overseas.

McDonald's kiosks had been the subject of media coverage somewhat earlier, such as a Los Angeles Times article that focused on test kiosks (one of which was in Los Angeles) and their overall upsides. Neither BuzzFeed nor the Los Angeles Times mentioned new $15 minimum wage laws as a reason behind McDonald's U.S. tryout of the self-service kiosks. (In fact, the minimum wage in the U.S. under federal law is still $7.25 per hour. Some states have set minimum wages slightly higher than those mandated by federal law, but nothing close to $15 per hour yet. Only a few individual cities in the U.S. have enacted minimum wages in the $15 per hour range.)

In October 2014, the web site PSFK reported upon the use of McDonald's kiosks in Australia and the reasons behind it. Once again, neither wages or relative labor costs were mentioned in the article (which cited the increase in smartphone use and customized ordering among customers as the overriding factors behind McDonald's interest in the kiosks):

This strategy is an attempt by McDonald's to respond to changing technology, particularly the rise of smartphone apps that make ordering from a restaurant a personal, individualized experience. As McDonald's Australia CEO Andrew Gregory tells news.com.au, "McDonald's is innovating and changing again to meet the needs of our customers."

While McDonald’s popularized the speedy service and unchanging, mass-produced menus that have become staples of the fast food business, their in-store sales figures are declining as build-your-own restaurants Chipotle and Potbelly report sales increases.

"With these tests, we will have an opportunity to hear directly from our customers in real-time on what they expect from McDonald's in terms of the overall restaurant experience and their ability to further customize their menu choices," McDonald's told the Register in a prepared statement.

Restaurant industry experts say McDonald's is going after fussier and older fast-food eaters who have migrated to better burger concepts like Smashburger and Five Guys Burgers and Fries.

"This is an effort to deal with fast-casual," said Jeff Davis, president of Sandelman and Associates, a San Clemente-based fast-food consulting firm. "McDonald's is becoming way more adult-focused."

Once again, minimum wage hikes were not cited in the article as a driving factor in McDonald's kiosk use. And in October 2014, when Slate surmised that McDonald's might replace human workers with robots, a McDonald's representative replied in response to a question about whether labor costs were a factor in the use of self-service kiosks:

To clarify, there are currently touchscreens being used as part of a Create Your Taste burger customization test that is ongoing right now in four restaurants in California. Customers customize their burgers, choosing from various toppings on touchscreens. The dining experience is interactive at McDonald’s and our restaurant staff who are participating in the four-restaurant test have shared that interacting with customers is still an engaging and important part of their jobs at McDonald’s.

Another factor to consider is the timeframe within which McDonald's kiosk test markets have been introduced. A 2011 Financial Times article (which did not mention labor costs) described the use of the machines in Europe several years ago, and a kiosk industry article in May 2011 obtained a statement from McDonald's in Europe (at the time, the primary location of ordering kiosks) regarding then-swirling rumors that the machines could reduce labor costs (and jobs):

"Self-order kiosks are not designed to replace front-counter service, a spokesman for Mcdonald's Europe said in an email. "Front counters remain a focal point of service where we have installed self-order kiosks, and customers can decide whether they wish to place their order at the counter or through kiosks. Staff are on hand in the dining area to assist customers using the kiosks."

McDonald's kiosks have been in development globally since 2011, well before movements to raise the minimum wage to $15 per hour had galvanized in the U.S. McDonald's has always cited food customization issues (not automation) as its goal in adding kiosks in test markets. Finally, no evidence has been presented by anyone spreading the rumor to prove kiosks represent any overall cost savings to fast food restaurants (as they must be purchased, programmed, maintained, partially manned, and otherwise are themselves a cost of doing business). While it's true McDonald's has been testing kiosks for self-serve ordering since 2011, it is false that the chain has done so specifically or primarily in response to minimum wage increases.