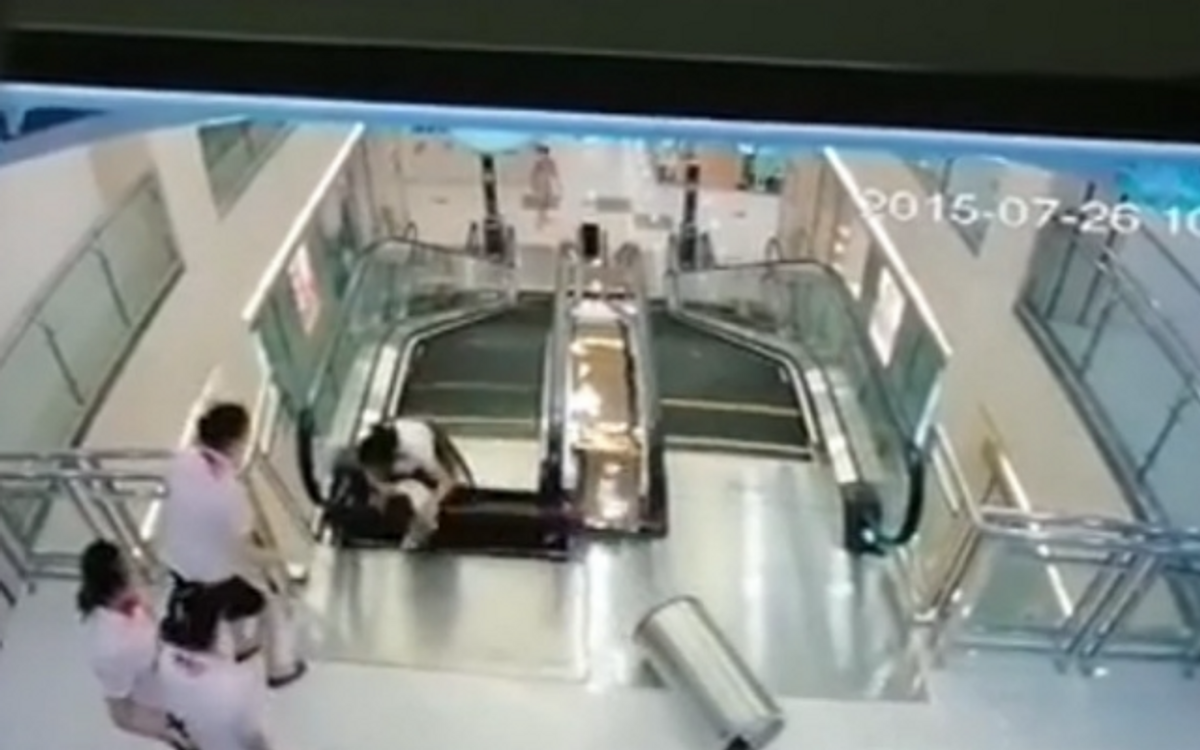 NEWS:   A horrifying video captured a Chinese woman saving her child just before she was killed in an escalator accident.

A 30-year-old woman was reportedly killed at a department store in the Chinese city of Jingzhou on 26 July 2015 when she fell into a gap that suddenly appeared at the upper end of an escalator after a floor panel collapsed under her feet.

Surveillance footage captured the tragic moment Xiang Liujuan tried to step off the escalator with her two-year-old son just as the footplate collapsed beneath them. Xiang managed to push her son safely across the gap and into the reach of a shopping assistant just before falling into the gap created by the collapsed floor panel:

An Anliang Mall employee scrambled to lift Xiang out of the escalator, but the mother was pulled into the machinery as her young child looked on. Firefighters subsequently worked for four hours to recover her body. The Hong Kong Free Press reported that mall management was aware the escalator had a potential safety issue, and the tragedy could have been averted if the shopping assistants had known to stop the escalator:

The tragedy could have been prevented if the trio [of shopping assistants] pushed a button to stop the escalator, which they knew was malfunctioning. Instead, they verbally warned Liu, according to an investigation by state broadcaster CCTV as well as the victim's sister-in-law.

Ma Peizhong, director of the Chinese National Elevator Inspection and Testing Centre, told CCTV that staff members at the mall "probably did not receive training" on how to manage escalators.

The CCTV investigation revealed the shopping mall management office was notified shortly before the accident that a metal panel, which connected the escalator with the concrete floor, had become loose. Maintenance workers who checked the escalator a few days [earlier] may have forgotten to put the panel back in place properly, CCTV said.

The three staff members standing at the top of the escalator warned Liu about the loose panel but she and her son had already boarded the machine, according to the Liu's sister-in-law, who was first to break the story on social media.

There were no warning signs and Liu could not have turned back after she received the verbal warning, the sister-in-law said.