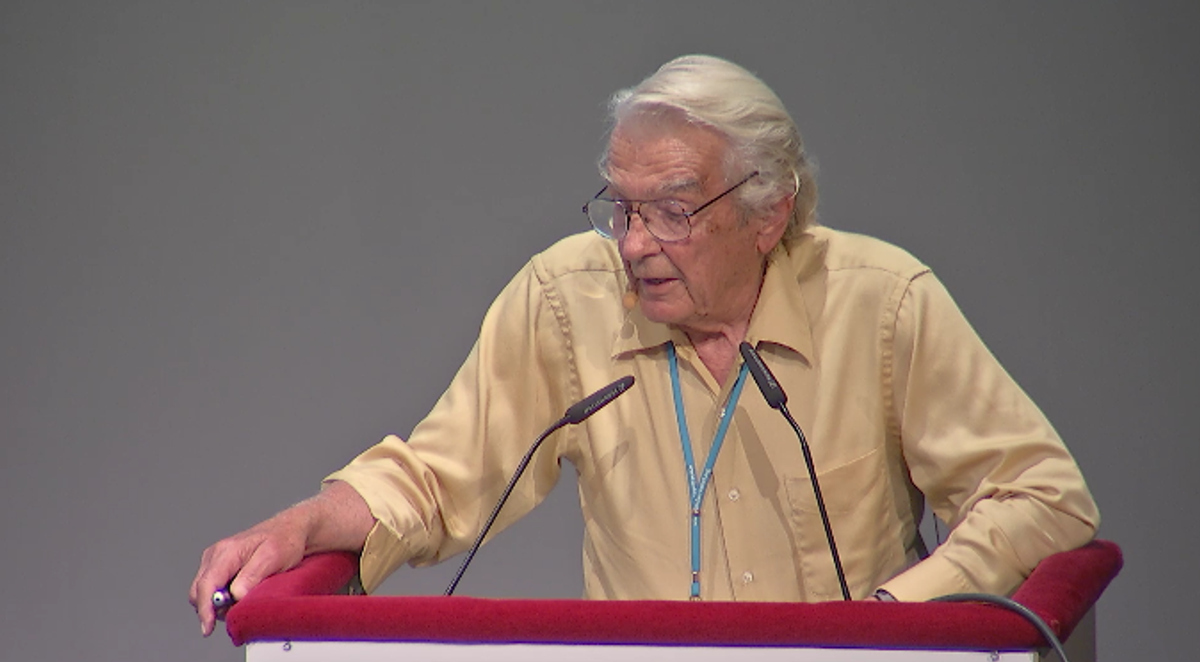 On 1 July 2015, Dr. Ivar Giaever took the stage at the 65th Nobel Laureate Meeting in Lindau, Germany, to give a speech about global warming. During the course of his speech, Giaever, who shared the 1973 Nobel Prize in Physics with Leo Esaki and Brian Josephson, denounced President Obama's claim that global warming was the biggest threat facing the world today (relevant comments begin around the 26-minute mark):

So here is a statement by Obama. He gave a recent speech at a college in the United States and he said "no challenge poses a greater threat to future generations than climate change." That's a ridiculous statement ... How can he say that? "I say this to Obama: Excuse me, Mr. President, but you’re wrong. Dead wrong."

Shortly after Dr. Giaever delivered his speech, his comments about President Obama began appearing on conservative web sites, cited as proof that global warming is a "hoax" and a "conspiracy." However, Dr. Giaever (a physicist, not a climatologist) has given the same type of global warming speech in the same setting before, and by his own admission he doesn't know much about the subject:

I am not really terribly interested in global warming. Like most physicists I don't think much about it. But in 2008 I was in a panel here about global warming and I had to learn something about it. And I spent a day or so — half a day maybe on Google, and I was horrified by what I learned. And I'm going to try to explain to you why that was the case.

Skeptical Science noted of Dr. Giaever back in 2012 that:

While Giaever is certainly a highly accomplished physicist, that does not automatically make him a climate expert as well. As Giaever himself has admitted, he has spent very little time researching the subject, and it shows. He simply bounces from one climate myth to the next, demonstrating a lack of understanding of Climate Science 101, and then insults the entire scientific field by comparing it to a religion.

Giaever has used his position of scientific authority as a Nobel Laureate to misinform people about a subject on which he has not even done the most basic research. That is not how a good scientist should behave, and that is why Giaever has rightfully and deservedly been criticized.

Climate change conspiracy buffs focused solely on Dr. Giaever while ignoring others who also addressed the issue of global warming at the 65th Nobel Laureate Meeting. On the final day of the meeting, 36 Nobel laureates signed the Mainau Declaration 2015 on Climate Change, an emphatic appeal for climate protection, stating that "that the nations of the world must take the opportunity at the United Nations Climate Change Conference in Paris in December 2015 to take decisive action to limit future global emissions":

We undersigned scientists, who have been awarded Nobel Prizes, have come to the shores of Lake Constance in southern Germany, to share insights with promising young researchers, who like us come from around the world. Nearly 60 years ago, here on Mainau, a similar gathering of Nobel Laureates in science issued a declaration of the dangers inherent in the newly found technology of nuclear weapons — a technology derived from advances in basic science. So far we have avoided nuclear war though the threat remains. We believe that our world today faces another threat of comparable magnitude.

Successive generations of scientists have helped create a more and more prosperous world. This prosperity has come at the cost of a rapid rise in the consumption of the world’s resources. If left unchecked, our ever-increasing demand for food, water, and energy will eventually overwhelm the Earth’s ability to satisfy humanity’s needs, and will lead to wholesale human tragedy. Already, scientists who study Earth’s climate are observing the impact of human activity.

In response to the possibility of human-induced climate change, the United Nations established the Intergovernmental Panel on Climate Change (IPCC) to provide the world’s leaders a summary of the current state of relevant scientific knowledge. While by no means perfect, we believe that the efforts that have led to the current IPCC Fifth Assessment Report represent the best source of information regarding the present state of knowledge on climate change. We say this not as experts in the field of climate change, but rather as a diverse group of scientists who have a deep respect for and understanding of the integrity of the scientific process.

Although there remains uncertainty as to the precise extent of climate change, the conclusions of the scientific community contained in the latest IPCC report are alarming, especially in the context of the identified risks of maintaining human prosperity in the face of greater than a 2°C rise in average global temperature. The report concludes that anthropogenic emissions of greenhouse gases are the likely cause of the current global warming of the Earth. Predictions from the range of climate models indicate that this warming will very likely increase the Earth’s temperature over the coming century by more than 2°C above its pre-industrial level unless dramatic reductions are made in anthropogenic emissions of greenhouse gases over the coming decades.

Based on the IPCC assessment, the world must make rapid progress towards lowering current and future greenhouse gas emissions to minimize the substantial risks of climate change. We believe that the nations of the world must take the opportunity at the United Nations Climate Change Conference in Paris in December 2015 to take decisive action to limit future global emissions. This endeavor will require the cooperation of all nations, whether developed or developing, and must be sustained into the future in accord with updated scientific assessment.