The Oregon Bureau of Labor and Industries' ruling that the owners of the 'Sweet Cakes by Melissa' bakery must pay $135,000 in damages for refusing to serve a same-sex couple in 2013 was upheld. 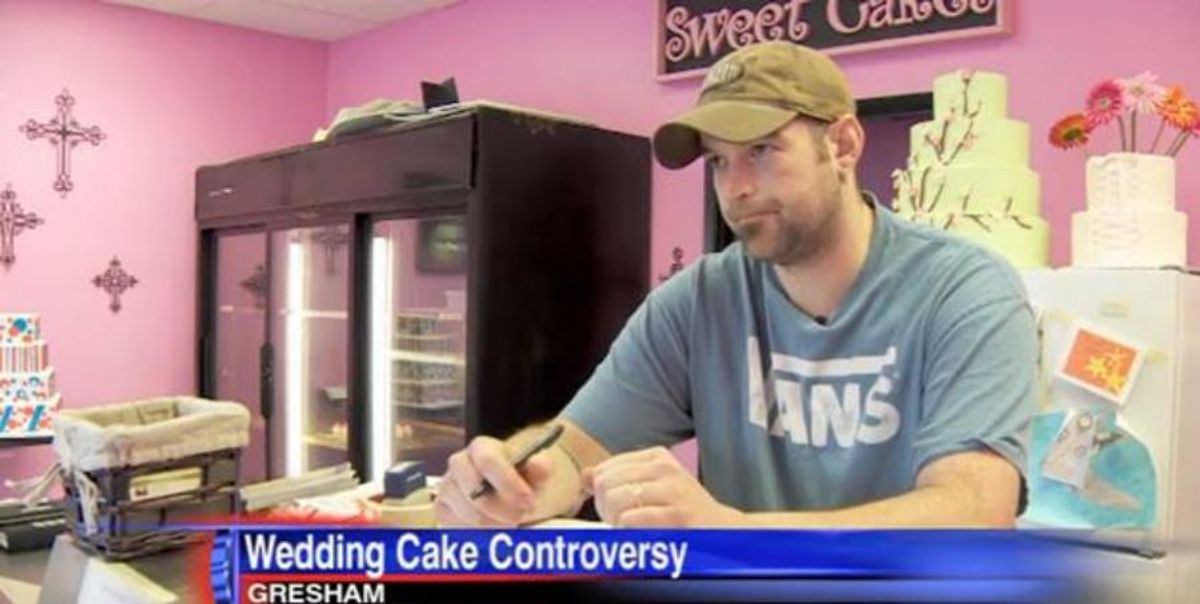 In July 2015, Oregon's Bureau of Labor and Industries ruled that the owners of the 'Sweet Cakes by Melissa' bakery must pay $135,000 in damages for refusing to serve a same-sex couple in 2013.

A dispute that began in 2013 when the 'Sweet Cakes by Melissa' bakery in Gresham, Oregon, refused to provide a wedding cake to a same-sex couple resulted in the state's Bureau of Labor and Industries (BOLI) ruled that owners Melissa and Aaron Klein must pay damages totaling $135,000 to complainants Laurel and Rachel Bowman-Cryer. A 2015 order [PDF] issued by the BOLI described the $135,000 as "damages, not fines or civil penalties":

Under Oregon law, businesses cannot discriminate or refuse service based on sexual orientation, just as they cannot turn customers away because of race, sex, disability, age or religion.

The Oregon Equality Act of 2007 includes an exemption for religious organizations and schools, but does not allow private business owners to deny service and unlawfully discriminate against potential customers.

The BOLI press release reiterated that the damages awarded were neither punitive nor unusual for such claims:

The Final Order noted that the non-economic damages are consistent with the agency’s previous orders, such as an earlier ruling against a Bend dentist In the Matter of Engle. In that case, BOLI awarded a Christian employee $325,000 in damages for physical, mental and emotion suffering due to religious discrimination and harassment.

After the press release was distributed, Melissa Klein published a Facebook status update reacting to the ruling and its provisions:

The final ruling has been made today. We have been charged with $135,000 in emotional damages, But also now Aaron has been charged with advertising. (Basically talking about not wanting to participate in a same-sex wedding) This effectively strips us of all our first amendment rights. According to the state of Oregon we neither have freedom of religion or freedom of speech. We will NOT give up this fight, and we will NOT be silenced. We stand for God's truth, God's word and freedom for ALL americans. We are here to obey God not man, and we will not conform to this world. If we were to lose everything it would be totally worth it for our Lord who gave his one and only son, Jesus, for us! God will win this fight!

This case is not about a wedding cake or a marriage. It is about a business's refusal to serve someone because of their sexual orientation. Under Oregon law, that is illegal.

Within Oregon's public accommodations law is the basic principle of human decency that every person, regardless of their sexual orientation, has the freedom to fully participate in society. The ability to enter public places, to shop, to dine, to move about unfettered by bigotry.

The entire ruling can be read here [PDF], and portions of it pertain to whether the owners of Sweet Cakes by Melissa communicated an intent to persist in violating Oregon's public accommodations law:

The lengthy ruling described incidents wherein the Kleins' promotion of their plight resulted in negative attention and threats to the Bowman-Cryers, including Klein's publication of court documents to Facebook that included the couple's home address. Contrary to many descriptions of the issue, no "gag order" was put in place that prohibited the Kleins from publicizing or talking about their case; however, the Kleins were ordered to cease proclaiming or offering any public suggestion that they intended to refuse service to same-sex couples in the future: The Kleins closed their bakery not long after the ruling. In December 2017, an Oregon state appeals court let stand the $135,000 in damages, with a three-judge panel rejecting a petition by the Kleins to overturn the ruling by the state’s labor commissioner as a violation of their rights under the U.S. Constitution to freedom of religion and expression.