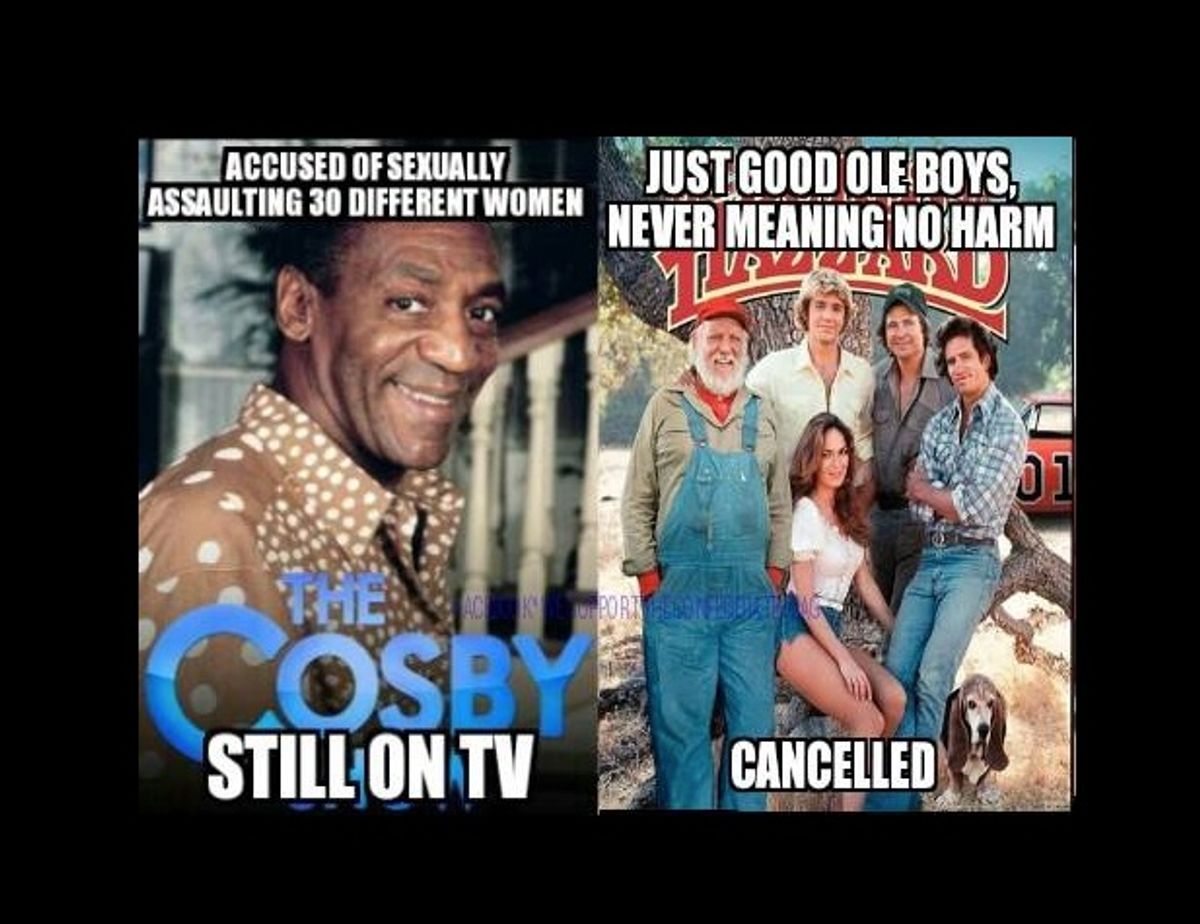 NEWS:   An online meme claims that The Dukes of Hazzard was "cancelled," but The Cosby Show continues airing.

On 1 July 2015, the TV Land cable channel confirmed that they had removed the 1980s show The Dukes of Hazzard from their schedule. (Although TV Land did not announce the reason behind this action, it was widely assumed the channel made the schedule change in reaction to an ongoing controversy involved displays of the Confederate flag.) On the same day TV Land announced the change, the meme below began circulating online (in some instances captioned "Someone please explain this 'white privilege' stuff to me"): The implication of the side-by-side comparison was relatively clear: a show starring comedian Bill Cosby, who has been accused (but not criminally charged, due to the expiration of the statute of limitations) of sexual assault by multiple women was allowed to remain on air because he's black, but The Dukes of Hazzard was swiftly yanked from TV programming schedules for the far less objectionable display of a Confederate flag on the roof of the (white) protagonists' vehicle.

The belief that Cosby was treated more favorably with respect to cancellation didn't exist just in meme form. Twitter users lamented the perceived double standard after the removal of The Dukes of Hazzard was announced:

TV Land has pulled Dukes of Hazzard because of confederate flag, but Nazis on Hogan's Heroes and Cosby rapist still cool. #WhereDoesItEnd?

The Dukes of Hazzard show was taken off tv for the rebel flag issue but The Cosby Show can stay on even tho he raped women? #disappointment

So they stopped showing this but keep playing reruns of The Cosby Show? Double standard much? https://t.co/9om6RiFW9X

However, the meme (and tweets) had it wrong. TV Land (along with a number of other entertainment outlets) had stopped offering The Cosby Show and/or cancelled future projects with the comedian back in November 2014, several months before the Confederate flag/Dukes of Hazzard controversy:

TV Land has pulled planned repeats of "The Cosby Show" from its schedule amid sexual assault allegations against the comedian.

NBC and Netflix also shelved projects with the comedian. A spokeswoman for NBC said the network's Cosby project was no longer in development, but offered no further comment.

While it's possible that The Cosby Show is still more accessible than The Dukes of Hazzard across all the platforms that currently offer vintage television series for viewing, the comparison made in the meme seen here is inaccurate. TV Land cancelled further airings of The Cosby Show when sexual abuse allegations against Bill Cosby came to light, and they removed The Dukes of Hazzard a week or two after national debate over the use of Confederate flags had begun. Neither show was treated more favorably than the other, and both appeared to have been removed from TV Land's schedule in response to current social and political controversies.