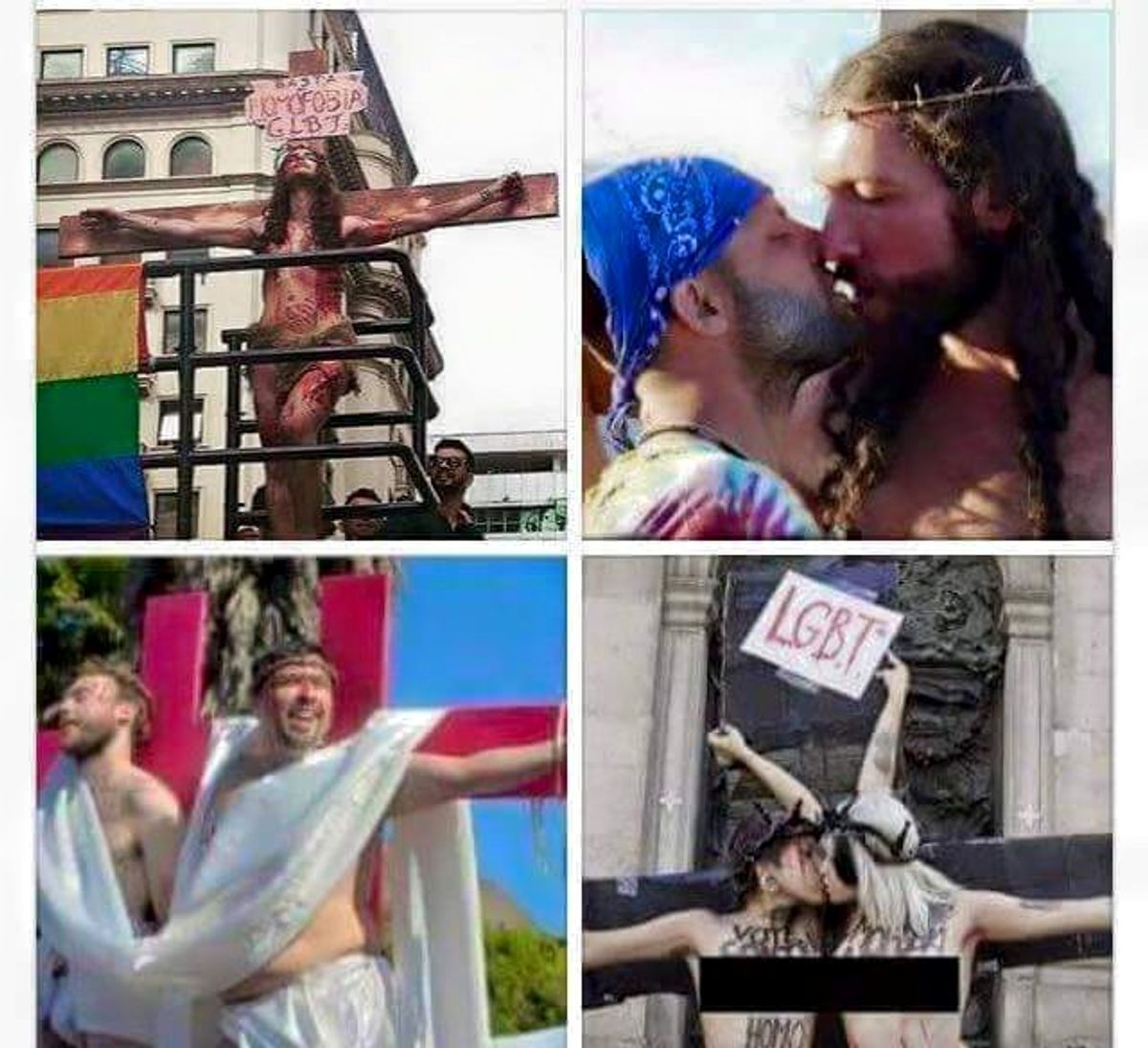 NEWS:   A set of photographs appear to depict a mock crucifixion of Jesus at a gay pride parade.

On 27 June 2015 (one day after the Supreme Court announced a ruling affirming same-sex marriage as a constitutional right), Facebook user Marcus Rodgers posted the above-displayed grouping of photographs to his Facebook timeline along with the following caption:

So yeah....as a Christian man I am not supposed to be offended ? See my face....... *-* Watch me go right back down into the gay community in Chicago and preach against homosexuality just like the last time. I am going to show yall a Revival Revolution. They this bold to disrespect my God and my faith and try to get mad at me for standing for what I believe in.... Hypocrites and double standards

Rodgers was not the only individual to share these images via social media in the wake of the Supreme Court's ruling. Posts similar to this one circulated on Twitter, too:

Some choose to express Gay Pride by mocking Jesus's crucifixion while carrying signs saying "Jesus was Gay" Okay then pic.twitter.com/24Xz2UTuHC

On 29 June 2015, the web site Young Conservatives shared the photoset in an article titled "Photo of Gay Men Kissing While Dressed as Jesus has Christians Outraged, and Rightfully So." No information was included in that article about the context or origins of any of the four photographs:

I’m warning you, this is GRAPHIC!

It’s tasteless, immoral, immature, disgusting, crass, and any other despicable word you can think of.

This is what America has and will become. To think it’s only the start makes me weep, so try to imagine how Jesus feels.

On 30 June 2015, the website Truth Uncensored published an article titled "2 Million Homosexuals Flood the Streets to Preform Mock Crucifixion of Jesus," which claimed:

2 million homosexuals flooded the streets and preformed a mock crucifixion of Jesus. A transgender actress played the part of dressing up like Jesus, being whipped until she bled, and then being crucified.

Someone posts their belief that gay marriage isn't okay and that's wrong. yet mocking the crucifixion of Jesus is okay? Makes sense....

The end of the Truth Uncensored article provided a hint as to the origin of the photographs:

The rally took place on the streets of the Brazilian city of Sao Paolo.

Most shares featuring one or more of the four photographs (often grouped together) after 26 June 2015 elided their context, location, or other information about the images, leading many to believe that the events depicted occurred as a reaction to the Supreme Court's decision in respect to same-sex marriage. Determining the origin of the photos was somewhat tricky, as they appeared to have been curated specifically to protest the ruling and originally appeared as individual images presented in entirely different contexts.

As the Truth Uncensored article briefly mentioned, at least one of the photos was taken at a Pride event in Sao Paulo on 7 June 2015. BuzzFeed published an article titled "This Transgender Actress Caused a Huge Internet Uproar After Dressing Up As Crucified Jesus in a Parade" on 10 June 2015, which identified the woman depicted as transgender activist Viviany Beleboni:

According to Brazilian news outlet O Globo, Beleboni appeared crucified on a parade float in order to call attention to what LGBT people suffer in Brazil, drawing parallels to Jesus’ suffering on the cross.

Photos of Beleboni circulated on Twitter well before the Supreme Court's decision on 26 June 2015, and the two events were largely unrelated to one another save for the fact they occurred in the same month:

Finally, it wasn't apparent where the "two million homosexuals" claim originated, as initial reporting of the Pride parade in question estimated "tens of thousands of revelers," not two (or even one) million.

Another one of the pictures had appeared on the Internet as early as April 2012, more than three years prior to the emergence of the photoset seen above. While the precise context of that photograph is not known, it frequently accompanied alerts about a (non-existent) "gay Jesus film" before it became attached to other rumors in June 2015:

Not that I'm a religious man but This is disgusting. Having a gay man kiss Jesus. Smh https://t.co/hincMigv80

Although the origin of the image is unclear, it was at least three years old in June 2015.

Another one of the images was also old and plucked from outside the United States, appearing as early as October 2014 on the web site JusBrasil. According to a translation of the article, the image (in which two women are topless and kissing on a cross) was taken at a protest, not a gay pride parade. The post stated that the photograph was taken in Brazil, and a separate article explained that the protest took place on 4 October 2014.

The photo of two men laughing on a cross that completed the photoset was similarly not taken after 26 June 2015: When that picture was snapped isn't known, but it was published sometime between 10 March 2009 and 19 November 2013 to the travel web site 52 Perfect Days. An appended description of the photograph read:

Every Easter Sunday in the Mission’s Delores Park, a gay charity group called the Sisters of Perpetual Indulgence holds a contest for the hunkiest Jesus lookalike among a group of scantily-clad hopefuls. Contestants, clothed in barely-there togas and accessorized with crowns of thorns and crucifixes, strut their stuff on a temporary stage in the park, after which a vote is cast and a new reigning Hunky Jesus is crowned.

Unsurprisingly, such an irreverent take on Christianity causes major uproar, and various Catholic and Christian groups have labeled it blasphemous and a mockery of their faith. But the group who organizes it insists that it is done in the spirit of humor, and that the contest is part of their mission to “promote universal joy and expiate stigmatic guilt”. The huge controversy also affords the group widespread public exposure in order to promote human rights and liberal issues within both the gay and mainstream community.

Like the other photos circulating in the set, the image was removed from its proper (albeit possibly controversial) context when it was circulated in June 2015. While all the images in the set are real, most are one or more years old, and at least two were taken outside the United States entirely. Provably, none of the photos was in any way related to (or depicted reaction to) the Supreme Court's same-sex marriage ruling of 26 June 2015.