This Cake Is a Lie 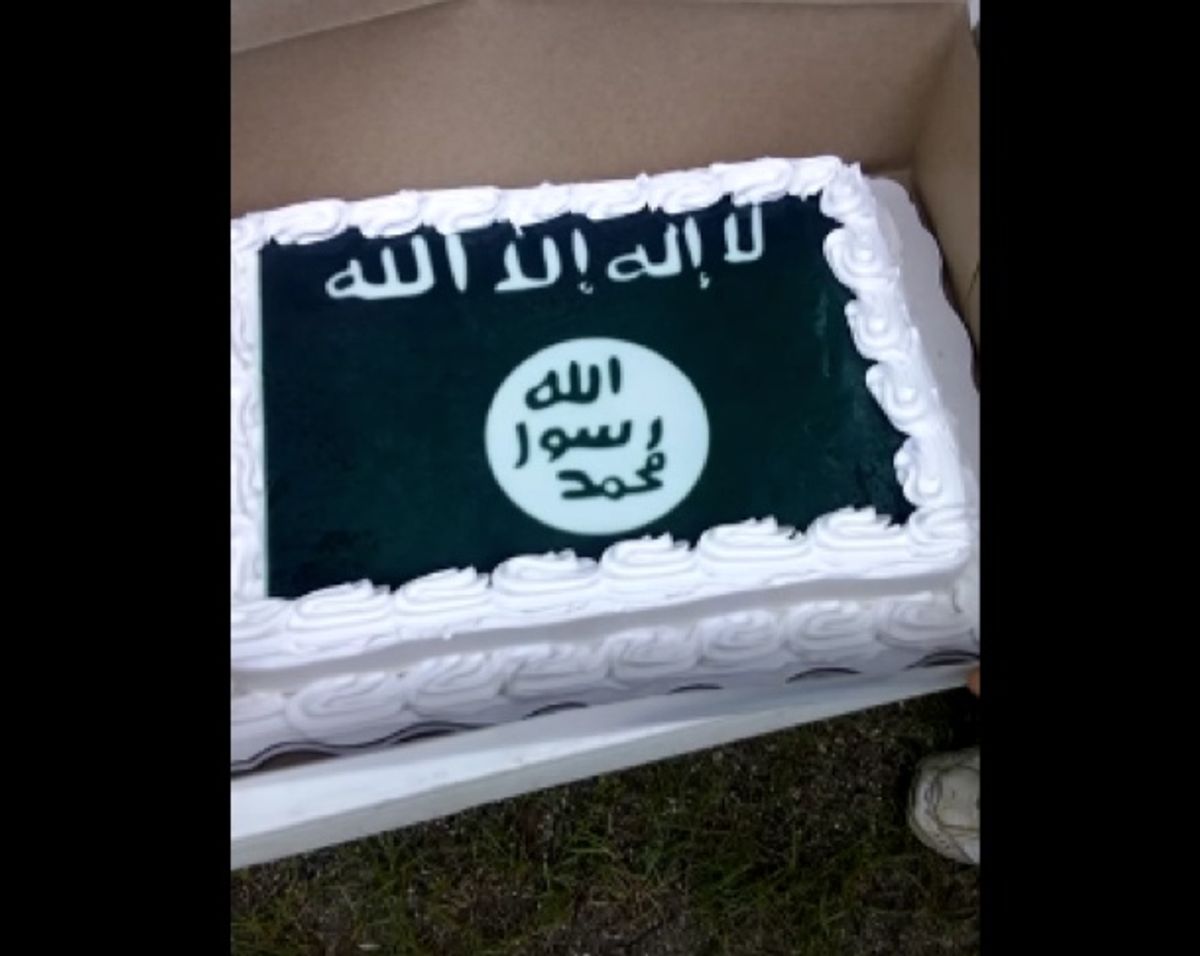 NEWS:   Walmart apologized for fulfilling a customer's cake order and producing a cake that featured an Islamic State (ISIS) flag.

Shortly after the shooting, major U.S. retailers such as Walmart and Amazon.com announced that they would no longer sell the Confederate flag or merchandise bearing its likeness. Almost immediately, anti-backlashers reported rumors holding that Amazon was following government orders in discontinuing the sale of the Confederate flag, while continuing to offer Islamic State flags for purchase.

A related controversy erupted (in what appears to be a growing trend of debating social issues via bakeries) involving Walmart and a customer's cake order. According to ABC News, a Walmart customer in Louisiana challenged the retailer's decision to discontinue Confederate flag merchandise by ordering a cake bearing that flag's image from the store's bakery:

On 06/25/15 I attempted to get an Edible image cake printed with the confederate flag image on it at Walmart. It was denied. The next day I had them do the same for the ISIS battle flag image I brought to them. They cheerfully did it. and sold me my ISIS cake. WTF Walmart! ISIS is beheading Christians, selling little girls into slavery, and is currently a terrorist org at war with the United States........but you can't buy the General Lee toy car at Wallmart? It's a damn shame.

Of course, Netzhammer's account is presented in a manner that suggests that Walmart bakery employees clearly recognized the Islamic State flag on sight and nonetheless "cheerfully" made the cake for him. It doesn't address the possible (and perhaps likelier) scenario that the folks processing his order were quite familiar with the Confederate flag, but they did not recognize the second image he proffered them as an "ISIS battle flag" (nor were they informed by him what the image represented). The viewer also can't tell from an isolated video whether its maker might have had to undertake multiple efforts before finding a store or employee who would accept the order. To viewers who think it inconceivable that anyone could fail to recognize an ISIS flag, we note that the flag has no distinctive coloration (it's black and white, like a Jolly Roger or a racing flag), and it bears writing in a language and alphabet unfamiliar to most Americans. And even CNN had difficulty picking out the real thing.

In fact, someone who didn't recognize this cake design as representing a flag but took the trouble to translate its Arabic writing (just in case) wouldn't find anything inherently suspicious or offensive about it: that script represents two standard phrases very common in the Muslim world: "There is no god but God" and "Muhammad is the messenger of God." Together they form the shahada, a declaration of faith found on many flags throughout the Islamic world, including the national flag of Saudi Arabia.

Furthermore, the Confederate flag policy change announced by Walmart (and Amazon) in the days after the Charleston shooting was made in part because such merchandise was widely available and remained popular among their American customers. The discontinuation of those items was prompted by a state of prominent supply and demand, a situation that was in no way analogous to the sale of ISIS flags at either retailer — therefore implementing a similar policy regarding (largely non-existent) ISIS-related merchandise was superfluous.

Unsurprisingly, Walmart confirmed that their employee was not aware that the image Netzhammer requested be put on his cake was a symbol associated with ISIS:

An associate in a local store did not know what the design meant and made a mistake. The cake should not have been made and we apologize.

All in all, what this exercise demonstrated was not an insidious form of double standard in American business and politics, but merely that some people can be tricked into unwittingly supporting someone else's predetermined point of view.