Ensign of the Times 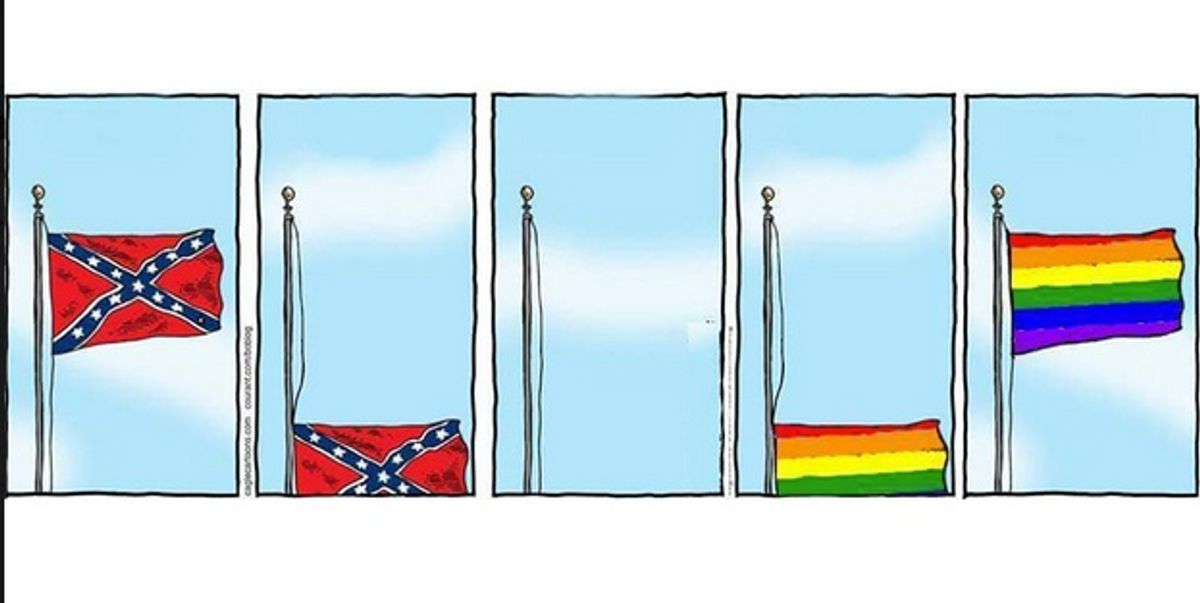 NEWS:   A cartoon depicting the replacement of the Confederate flag with a gay pride flag published by the Southern Poverty Law Center was an amalgam of two separate works.

On 26 June 2015, social media users were captivated by a U.S. Supreme Court decision that established same-sex marriage as a constitutional rights across the country. Among the most popular social media items that day was one posted by the Southern Poverty Law Center (SPLC), which featured a cartoon that illustrated the Confederate flag being lowered and a gay pride flag raised in its place. The caption read "There it is."

The comic encompassed the convergence of two different debates in late June 2015: one involving renewed calls to restrict the display of Confederate flag to historical and private contexts (not public buildings), and the other the recent Supreme Court decision on marriage equality. A number of users who supported both initiatives appreciated the comic, which was subsequently shared hundreds of thousands of times on Facebook alone.

On 29 June 2015, the SPLC published an update regarding the flag comic, along with a bit more information about its origins. According to the group's Facebook page, the original work was slightly different than the widely-circulated version and lacked proper attribution:

On Friday, we posted a cartoon that seemed to perfectly encapsulate a tremendously emotional week. Five panels depicting the Confederate battle flag going down a flag pole, representing the political conversation following the horrific events in Charleston, South Carolina, and a rainbow (LGBT pride) flag going up in its place, representing the Supreme Court’s decision to make marriage equality the law of the land.

The problem? Well, we got the credit wrong. And the cartoon was modified from its original form.

The SPLC stated that the cartoon originally appeared in the Hartford Courant on 22 June 2015 in an editorial by Bob Englehart titled "Flag Flagged Maybe." In its initial form, that cartoon was markedly different and addressed only one of the two current hot button issues: The SPLC explained how the modified version came to appear on their page without proper attribution:

Someone had added the last two panels of the rainbow flag being raised. In doing so, they removed the original caption “Going ... going ... gone” and, even worse, deleted Mr. Engelhart’s signature, which also included the date and the Hartford Courant copyright.

We screwed up. We found the image on Twitter and credited the editorial cartoon syndicate Cagle Cartoons, which appeared in the doctored cartoon.

Thankfully for us, an editor at the Hartford Courant generously asked that we only correct the record here, which we were eager to do.