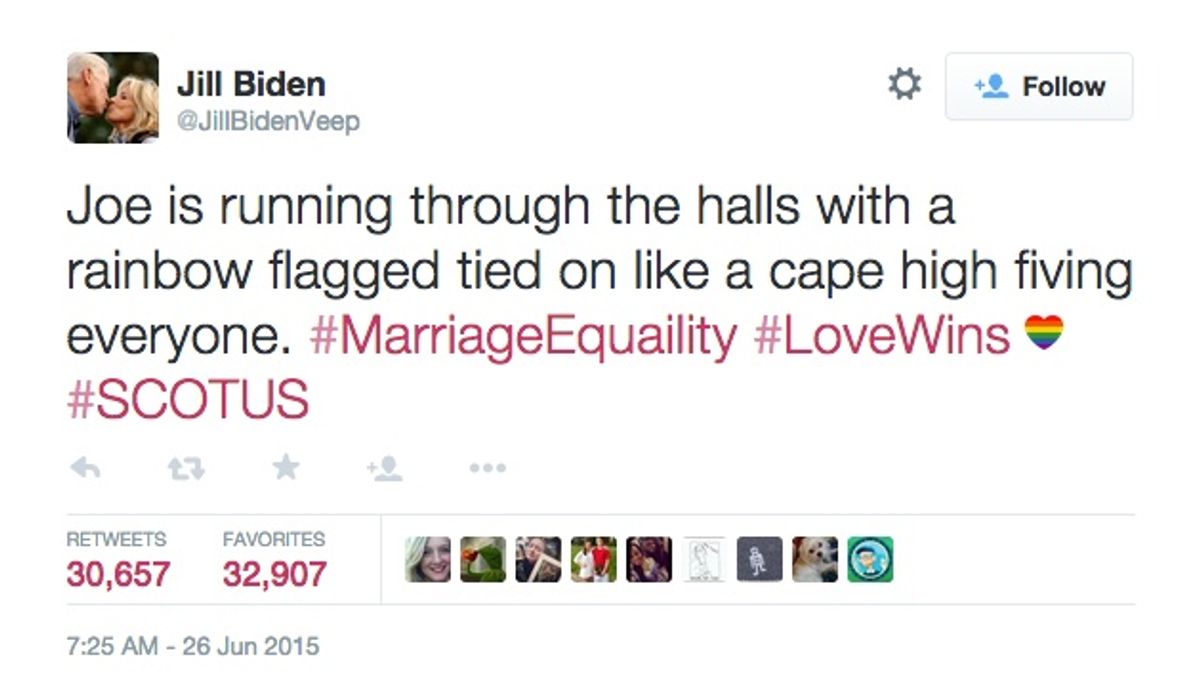 On 27 June 2015, the U.S. Supreme Court ruled 5-4 in favor of marriage equality (in respect to Obergefell v. Hodges and three related cases), recognizing that the Constitution grants the right to marry to Americans gay and straight alike. Amid popular social media reaction to the historic decision was a tweet attributed to Dr. Jill Biden, wife of the Vice President (who, if you recall, "got out over his skis" before the Obama administration officially came out in support of marriage equality in 2012).

The tweet ostensibly published by Dr. Biden as news of the decision broke on social sites read:

Tens of thousands of social media users re-tweeted the message, and many more shared screenshots of it to Facebook. The mental image of Vice President Biden (whose infamous enthusiasm became a part of Obamacare when he referred to the legislation as a "big fucking deal") "running through the halls in a rainbow-flagged cape" seemed to delight Facebook and Twitter users already in excellent spirits over the decision.

However, the tweet was not sent by Dr. Jill Biden. As many social media users later pointed out, the popular account responsible for it identifies itself as a "parody":

Dr. Biden did acknowledge the Supreme Court's ruling on Twitter, both in her own words and via re-tweets of her husband's actual reaction:

While Dr. Biden and Vice President Biden did tweet about the decision on marriage equality, neither party mentioned the latter's running through the halls wearing a rainbow-flagged cape. However, none of the Bidens' real tweets proved nearly as popular as the parody one.