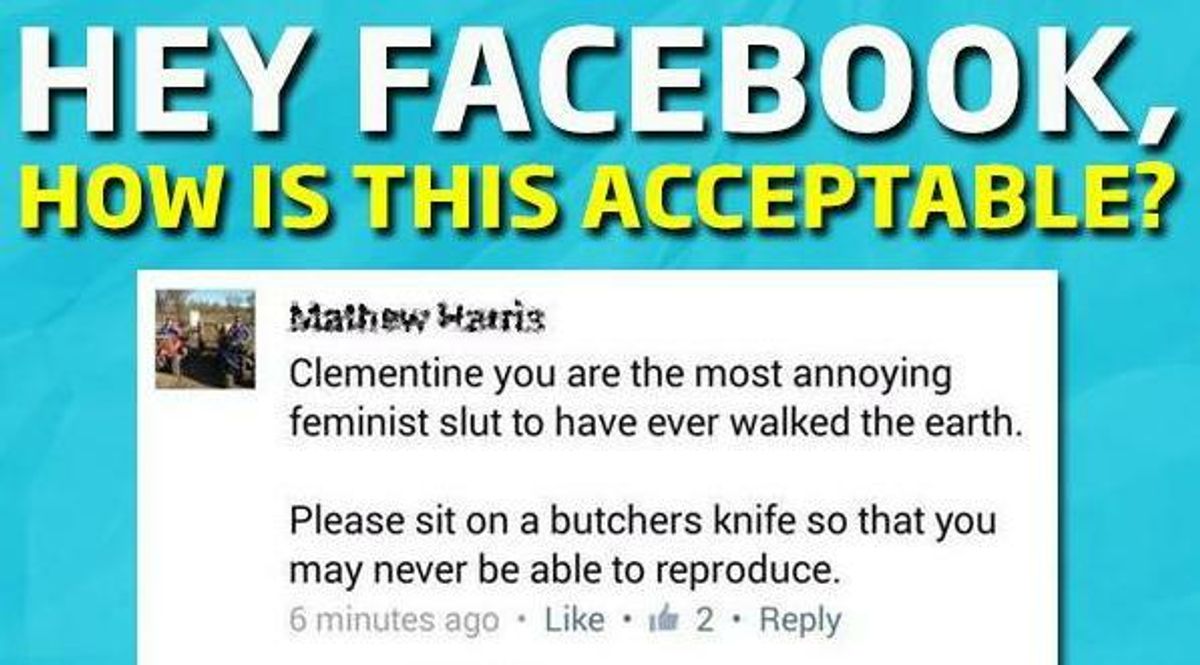 An Australian writer's account was temporarily suspended by Facebook after she shared some of the abusive and degrading messages she received from men. In June 2015, many social users encountered a meme seemingly expressing dismay at a situation in which a woman had filed a hate speech complaint about a Facebook post calling her a "slut" and suggesting that she "sit on a butcher knife," but was told the post had not been deemed a violation of Facebook's Community Standards — even though those standards state that they prohibit "direct and serious attacks on any protected category of people based on their race, ethnicity, national origin, religion, sex, gender, sexual orientation, disability or disease":

Earlier this week journalist Clementine Ford was banned by Facebook for posting some of the vile messages she had been receiving. Yet when she reported those same messages, they were deemed not to violate their community standards.

IF ENOUGH PEOPLE SHARE THIS THEN MAYBE FACEBOOK WILL START GETTING THE MESSAGE THAT THE ONLINE HARASSMENT OF WOMEN IS NOT ACCEPTABLE. #saynotobullying Many viewers were left wondering what the backstory behind all this was.

The issue began with Australian writer Clementine Ford, who on 18 June 2015 posted a criticism of the Australian morning television news program Sunrise for suggesting that women who posed for nude photographs subsequently stolen by hackers and leaked online were themselves at fault for the violation of privacy: Stating that "I've taken nude photos just because I have a smart phone and it's fun. None of that means I have asked for my privacy to be violated, my photos stolen and my very self made available for public humiliation and judgment," she accompanied her post with a topless selfie that displayed the words "Hey #Sunrise, get fucked" across her chest (but complied with Facebook's nudity guidelines by not showing any nipple or breast in the photograph): Predictably, Ford's post prompted a torrent of mocking and abusive messages from male posters (over 1,000 messages in 48 hours, she reported): When she publicly shared those messages, she found her own Facebook page temporarily suspended due to her having violated Facebook's "community standards":

Facebook has just banned me for 30 days for 'violating community standards' by reposting some of those abusive messages men have sent to me.

The Facebook suspension was soon overturned, but as Ford told BuzzFeed news, the process seemingly evidenced an intractable double standard against women on Facebook's part:

It’s not just inconvenient to me personally, it demonstrates exactly how backwards FB and its investigation processes are.

I have reported numerous misogynistic posts in the past only to be told they were acceptable under FB’s guidelines.

So to have them turn around and ban me for the fourth time for merely showing what kind of vitriol is routinely sent to me by cowards determined to hide behind a defence of 'rights to abuse women privately and not be held accountable for it' is actually deeply upsetting and enraging.

To Facebook, women are just a punchline while the rights of men to harass them are sacrosanct.

No one should be punished for speaking out against abuse, especially not the kind of cowardly abuse sent under the banner of 'private correspondence'.

Unfortunately, some memists seem to have missed the point quite badly: