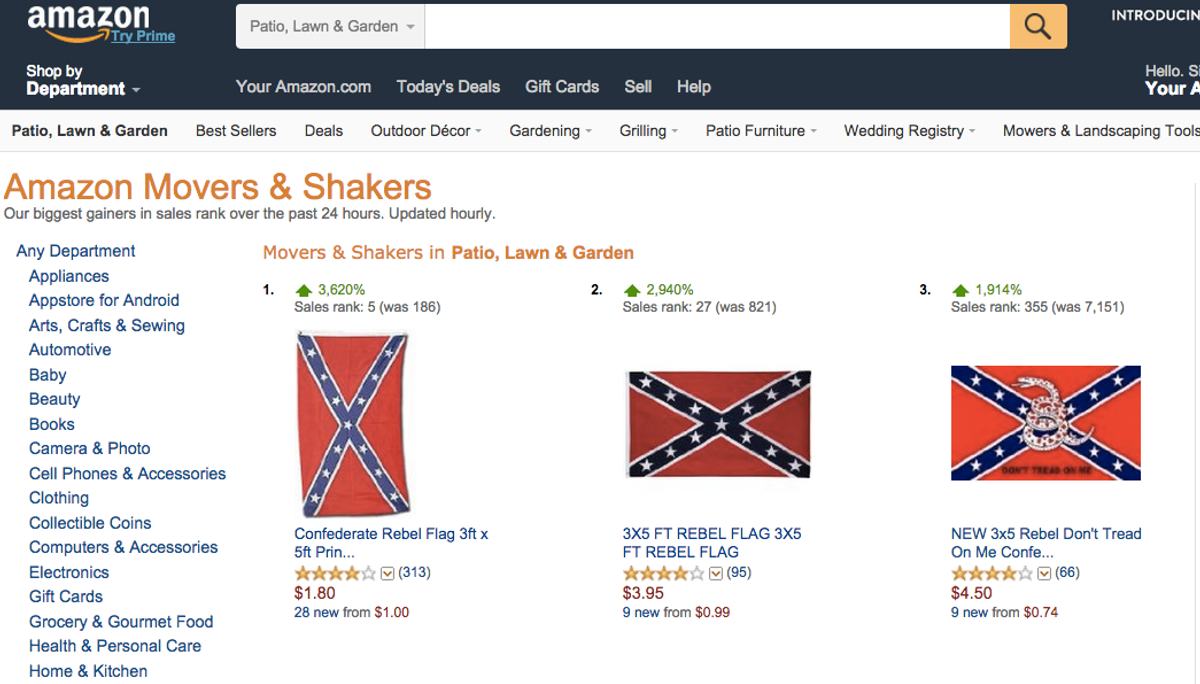 On 23 June 2015, Amazon.com announced a controversial decision to discontinue the sale of Confederate flags and related merchandise. Almost immediately, rumors began to circulate about Amazon's decision, such as one suggesting the site evidenced a double standard by continuing to sell Islamic State (ISIS) flags.

On 25 June 2015, the conspiracy-oriented site InfoWars published an article titled "Amazon Staff: Government Ordered Us Not to Sell Confederate Flag." Subtitled "Company sales reps say they were 'instructed' by feds to ban rebel flag," the article did not cite any relevant law, but claimed that an Amazon.com chat representative had inadvertently admitted a more "sinister" impetus behind the online retailer's decision to discontinue the sale of Confederate flags:


At first the Amazon staffer claims that the items were banned because they were deemed to be offensive, but when pressed by the customer, the sales rep tells a different story.

“Is this a political statement by Amazon.com or is this a directive that you’re following, that the government said you know we want you guys not to sell these anymore?” asks the caller.

“The government is not allowing us to sell this Confederate flag,” responds the staffer

“So the government is not allowing you….to sell it?” asks the caller, to which the sales rep responds, “yes.”

“So Amazon is not making a political statement, this is something the government told you to do?” questions the caller.

The article also featured a video uploaded to YouTube on 24 June 2015:

The rumors led to a flurry of social media posts published by users outraged by the government's purported role in Amazon.com's decision to dump Confederate flag-related memorabilia:

In an attempt to replicate the claims made in the InfoWars article, we initiated a customer service chat with Amazon on 25 June 2015. The Amazon representative insisted upon confirming our e-mail address (a standard first step in Amazon customer service), and our ensuing chat was markedly different than the version offered by InfoWars: After confirming my identity, the second customer service representative said to me:

We tried again, to see if the answer would change:


Can you tell me why the Confederate flag is no longer available on Amazon.com?


Yes. We have taken it out for further research and I'm sorry I do not have the information on this, however I know that our internal teams are working on this.

Based on that customer service chat interaction with Amazon.com, a few aspects of the InfoWars claim became suspect. The first rep to whom we were connected admitted that he or she was not a United States citizen or resident and did not even understand the question posed. The second was likely not a U.S. resident either ("Amreen" being an uncommon name in the U.S.) and provided an answer that suggested he or she similarly was unaware of the nature of the item referenced, much less why we were unable to locate it on Amazon.com.

The source of the screenshots cited in InfoWars' article was not disclosed, but the video of a separate interaction (embedded above) provided significant context about the purported admission from Amazon.com reps. More than three minutes into the clip, the "customer" on the line with Amazon persisted in badgering the representative before he began insinuating he would cancel his account (a metric upon which the representative is very likely measured at work).

After a series of cancellation-related hints and remarks, the man directly tells the Amazon rep he would be willing to retain his account if she would say that Amazon made the decision under pressure by the government. The coerced sales rep hastily agreed in what clearly was an answer formulated to discourage the customer from canceling his account on the spot. It's unambiguous that the representative (who had been berated for several minutes up to that point) did not offer up the suggestion herself, and her agreement with the caller seemed entirely borne of his increasing frustration and anger.

Regardless, rumors of Confederate flag sales bans are firmly in the realm of conspiracy theory, as Amazon.com announced its decision to stop selling Confederate flag merchandise on 23 June 2015, but no new federal law or guideline had been passed or promoted to evidence government involvement. Therefore, the rumor suggested that Amazon had been targeted by a secret law or other covert pressure applied by shadowy government operatives.

In the absence of sweeping federal action actually banning the Confederate flag (or changes to laws permitting individual Americans the right to display it), there's no reason to believe Amazon's decision was anything other than business-related. Moreover, available information suggests that such claims have been exaggerated and misrepresented (if not outright fabricated), as seen in the video above. If InfoWar's documenting screenshots (of unknown origin) were genuine, the response they captured was likely the product of the confusion (or harassment) of a single Amazon.com representative and not a true expression of Amazon corporate policy.

UPDATE: On 25 June 2015, Amazon.com replied to our query about this rumor. A representative for the retailer said:

We can confirm that Amazon acted independently to remove Confederate flag merchandise.