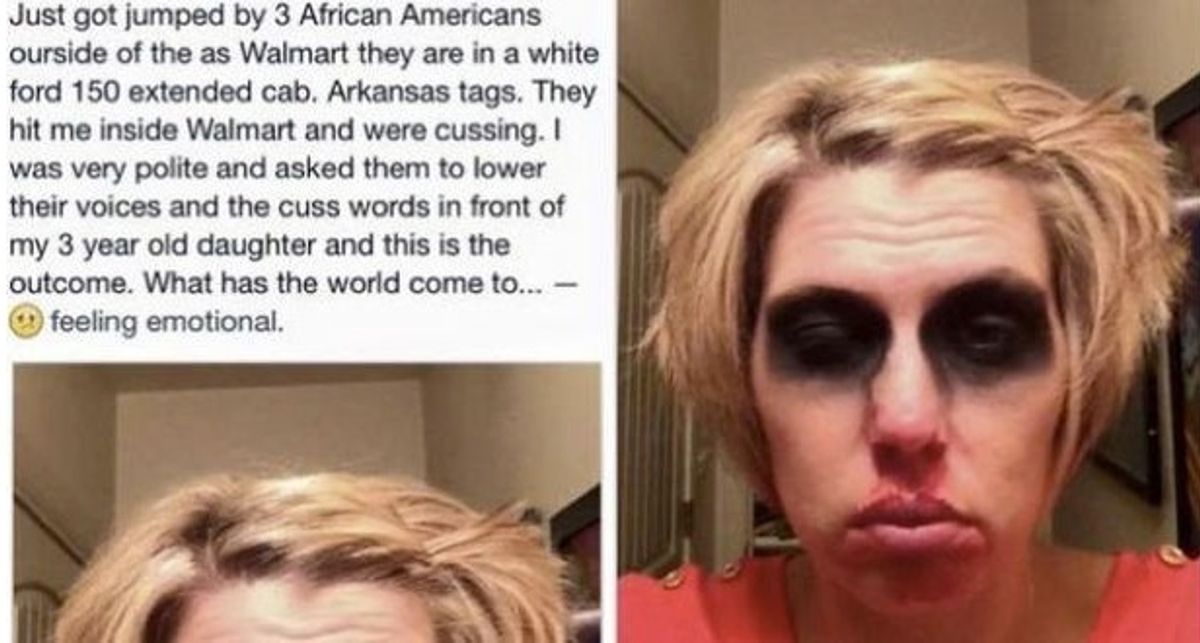 NEWS: A Texarkana woman named Ashley Casey Martin claimed she was attacked at a Texas Walmart in a racially motivated incident.

A woman in Texarkana, Texas, reported in a series of social media posts that she was attacked by three black individuals (gender unspecified) inside a Walmart store, but her story drew immediate skepticism due to the unconvincing depiction of her purported wounds:

The posts in question were published by a woman who identified herself as Ashley Casey Martin, but as they've since been deleted, the precise date or time of the posts is no longer available. Her initial post to Facebook (pictured above) included two photographs of what appeared to be makeup-blackened eyes and similarly fabricated blood around her nose, with a caption reading:

Just got jumped by 3 African Americans ourside of the as Walmart they are in a white ford 150 extended cab. Arkansas tags. They hit me inside Walmart and were cussing. I was very polite and asked them to lower their voices and the cuss words in front of my 3 year old daughter and this is the outcome. What has the world come to... - feeling emotional

By the time the photos and the attendant claim reached a widespread audience on social media, most of the social media posts had already been deleted. According to the Daily Dot, the Texarkana Police Department first published and then deleted a post on their own Facebook page that had cast doubt on the story:

"I’ve talked to our detective Sergeant. He has reviewed all of the reports from the weekend and there is no report of this incident," wrote [Texarkana Police Department public information officer Mike] Jones. "There is also no report in our system from a person with the poster's name. We are confident is stating that this incident, if it did occur, has not been reported to this department."

The Texarkana Police Department also posted public statements regarding Ashley's claims on its Facebook page. The post stated that police officials "believe the post to be fake" and that "the injuries ... are highly questionable." The post has since been taken down.

Before Ashley Martin's social media posts were deleted or restricted, she published an additional photograph showing her in sunglasses with cotton in her nostrils, accompanied by the statement (presumably made in response to skeptical comments) that:

Here is your police report. Sorry I got jumped by three African American young men. I have 2 black eyes and nose still is bleeding, and somehow I am in the wrong. Enough for people to say it was makeup, how embarassing and very rude quite frankly. I don't want you pitty attention anything. I'm just warning there are dangerous people in Texarkana be careful. They did this to me for no reason in front of my 3 year old. At Texas side Walmart. No actual police report was appended to the photograph.

On 22 June 2015, a Texarkana PD representative explained the reason behind the department's deletion of their earlier Facebook post:

I was just informed by my social media manager that he was contacted by a friend of the original poster. We were informed that she is emotionally disturbed and that they are attempting to get her the assistance that she needs. We have removed the post to avoid contributing to her difficult struggle.

The Texarkana Police Department Facebook page does not currently include any information regarding the initial claims and their deletion.