‘Save a Life, Surrender Your Knife’

Readers pondered a November 2014 article reporting that British police were undertaking an effort to disarm the citizenry of "pointy knives." 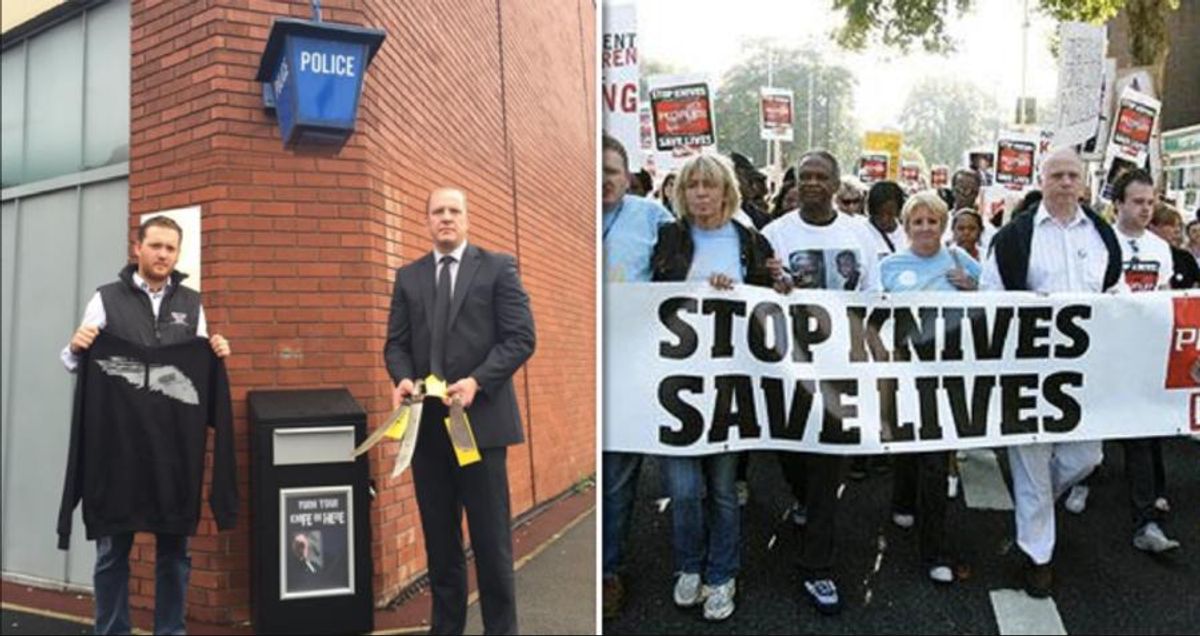 In June 2015, in the wake of another mass shooting incident that left nine victims dead at the Emanuel African Methodist Episcopal Church in Charleston, South Carolina, debate about the issue of gun control flared up again in the U.S. In the midst of that debate, a number of social media users pointed to a November 2014 Counter Current News article purportedly describing an effort by British police to disarm the citizenry of dangerous "pointy knives":

The new “Save a Life — Surrender Your Knife” program is in full swing and police are telling us that they have joined forces with an already growing trend in the United Kingdom to ban “pointy” knives.

Lancashire Police tell us that an “amnesty” program began at the end of August, and “more than 800 knives have been handed in across the county — including swords, machetes and commando knives.”

“The amnesty was extended for a further week owing to its success,” Lancashire Police representatives explained.

The Lancashire department explains that their “officers have now given their backing to a national initiative designed to raise awareness of knife crime and encourage the surrender of dangerous weapons.”

Since "knife control" is a subject often rhetorically employed in gun control discussions, many readers pondered whether the article was yet another bit of satire (or clickbaiting fake news).

In fact, the web site for the ‘Save a Life, Surrender Your Knife,’ which urges the public to surrender knives in order to reduce "knife crime" in the UK is still online (although it doesn't appear to have been updated since February 2015): Lancaster Constabulary's web site also still displays a page on "Knife Crime" that describes the ‘Save a Life, Surrender Your Knife’ program:

Lancashire Constabulary has joined forces with the ground-breaking national anti-knife crime campaign ‘Save a Life, Surrender Your Knife’, a national initiative designed to raise awareness of knife crime and encourage the surrender of dangerous weapons.

The British Ironwork Centre, which is coordinating the project, intends to use knives handed into police to create a 20 feet high guardian angel sculpture in memory of those whose lives have so tragically been lost.

Knife bins at locations across Lancashire, including job centres, community centres and leisure centres have yielded over 3,000 knives for the project and although the bins have now been removed, you can also hand in any knife at any police station with a front counter.

And that page links to the web site of the "No Knives Better Lives" program, which seeks to "raise awareness of the consequences of carrying a knife":

No Knives Better Lives is a national initiative which works with local organisations to provide information and support. The campaign aims to raise awareness of the consequences of carrying a knife and provides information on local activities and opportunities for young people.

A July 2014 BBC television news report also covered the ‘Save a Life, Surrender Your Knife’ campaign:

The online version of BBC News published an article on an anti-knife peace rally in September 2008:

Over 1,000 people have marched through London to a peace rally, calling for an end to knife crime.

Their faces shone out from T-shirts worn by their families and friends — the victims of knife and gun crime in recent years.

The images of the young men and women captured in happier times were framed by their names and poignantly, the dates of their births and deaths.

The peace rally, in terms of noise, was anything but peaceful. Whistles and horns punctuated chants of 'save lives, stop the knives' as the marchers headed for Hyde Park.

The friends of Ben Kinsella, who was stabbed in north London in July, formed a large group in the contingent. Many were wearing bright sunglasses, and chatted to each other as they walked in memory of their friend.

Even so, some of the bits from the Counter Current News article still sounded like they just had to be satirical in nature, such as the following:

A call from the British Medical Journal was published several years ago, arguing that “many assaults are committed impulsively, prompted by alcohol and drugs, and a kitchen knife often makes an all too available weapon,” according to the BBC.

Researchers “consulted 10 top chefs from around the UK, and found such knives have little practical value in the kitchen. None of the chefs felt such knives were essential, since the point of a short blade was just as useful when a sharp end was needed.”

But the BBC did indeed report on such a study back in May 2005:

A team from West Middlesex University Hospital said violent crime is on the increase — and kitchen knives are used in as many as half of all stabbings.

They argued many assaults are committed impulsively, prompted by alcohol and drugs, and a kitchen knife often makes an all too available weapon.

The research is published in the British Medical Journal.

The researchers said there was no reason for long pointed knives to be publicly available at all.

They consulted 10 top chefs from around the UK, and found such knives have little practical value in the kitchen.

None of the chefs felt such knives were essential, since the point of a short blade was just as useful when a sharp end was needed.

So yes, those Brits are serious about knife control.