A woman in Baltimore started a GoFundMe campaign after a neighbor allegedly described her rainbow yard light display as "relentlessly gay." 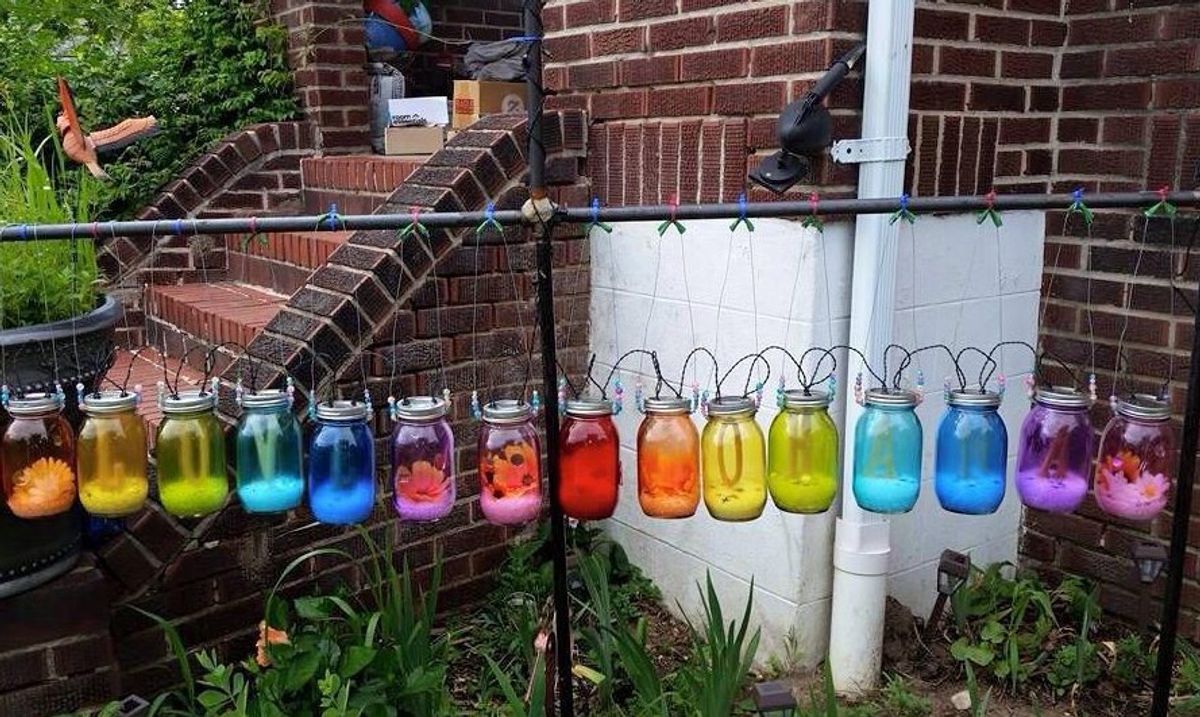 On 16 June 2015, Baltimore resident Julie Baker initiated a GoFundMe campaign titled "Relentlessly Gay," saying that she had been prompted to start it at the suggestion of her 17-year-old daughter when an anonymous neighbor sent her a letter regarding rainbow jar lights displayed in her yard. The note read: "Your yard is becoming Relentlessly Gay! Myself and Others in the neighborhood ask that you Tone it Down. This is a Christian area and there are Children. Keep it up and I will be forced to call the police on You! Your kind need to have Respect for GOD."

Baker's GoFundMe campaign description stated that she wanted donations in order to "make my home even more 'relentlessly gay':


I opened my door, and found a note from my neighbor. Regarding a set of rainbow jar solar lights hanging in my yard that spell out "Love" and "Ohana". They informed me that the neighborhood is "christian" and has "children" and asked me to stop being "relentlessly gay"....

So, I am starting this fundraiser so I can work to make my Home even More "relentlessly gay" If we go high enough, I will see if I can get a Rainbow Roof!

Because my invisible relentlessly gay rainbow dragon should live up there in style!

Put simply, I am a widow and the mother of four children, my youngest in high school and I WILL NOT Relent to Hatred. Instead, I will battle it with whimsy and beauty and laughter and love, wrapped around my home, yard and family!!!

Thanks for your relentlessly gay support!

On 17 June 2015, a friend of Baker's published a photograph of the note to the popular Facebook page of Star Trek actor George Takei. From there, tens of thousands of users shared the missive: Baker self-identifies as bisexual but said that her rainbow lights had nothing to do with any form of sexual identification:


"The point of the rainbows isn't about being gay," she said. "It's because we love rainbows. I have a rainbow tattoo on my arm. We're going to decorate the white siding of our house with them."

Baker has lived in her Kenwood Avenue home for more than 20 years and is used to the anonymous harassment. One note, a few years ago, was much more menacing than the rainbow note.

"It was after one of the big eclipse events a few years back," Baker said. "My daughters had lit candles celebrating our lives and put out incense as offerings to the universe. The next morning we found our pot bellied stove kicked over and a note that said 'your kind are not wanted here' it also mentioned devil worshiping and ended with a reminder that houses burn for no apparent reason. I didn't sleep much after that note."

Within a day, Baker's "relentlessly gay" plea seeking funds to paint and decorate the outside of her home in rainbows had gone viral and was stacking up donations. By 18 June 2015 the campaign had far exceeded its original goal of $5,000, raising $23,000 and counting.

Baker described the use to which she planned to put the funds raised through her GoFundMe campaign:

“All the parts of my house are going to be rainbow-fied,” she said. “Have you ever met a person in your entire life that has seen a rainbow and not stopped and smiled? That’s going to be my house.”

She also might find a way to contribute some of the money to anti-bullying programs for school kids, she said.

Even before the painters arrive — Baker’s 30-year-old son spent [the day] researching house painting services and reminding his mother to take a break from the hubbub to eat something — Baker’s yard has become a place for people to stop by to express their enthusiasm for her project.

Predictably, the suddenly viral GoFundMe campaign attracted some skepticism. Social media users questioned whether the note at the heart of the matter was real, pointing to previous fundraising hoaxes of similar nature, as well as the recent Rachel Dolezal story (which involved a number of dubious claims of race-related threats). Critics particularly seized on the detail that the anonymous (and therefore untraceable) note and Baker's own writings shared the same curious pattern of superfluously capitalized words.

As donations to the "Relentlessly Gay" GoFundMe campaign piled up to more than $43,000, critics began questioning why Baker was continuing to accumulate monies far in excess of the $5,000 she initially asked for. On 22 June 2015, Baker suspended the campaign, saying that she had "just learned" that GoFundMe campaigns could be vountarily ended, and posted the following message addressing public suspicions:

I want to humbly thank everyone for their extreme generosity. Please now, take all of this good energy and help each other. I just learned moments ago that I could turn off the donations, and I am doing so because I there is plenty, more than plenty, above and beyond the goal.

On a sadder note, the world is filled with hate and fear, as such I want to work to remove any doubt about the authenticity of the letter. Until then I am not taking a dime out of this account.

When we asked Julie Baker if she could provide any information to readers to reassure them of the authenticity of her claims, she replied:

I have been in contact with the police, they are satisfied with me, I am satisfied with them, and am grateful to them. They have no reason to believe that I have done anything wrong or been anything but authentic. They even have the long history of the various things that have happened to me since moving into my house.

In a separate Facebook conversation, Baker stated that she had engaged in a "productive beneficial conversation with the police [and] they were satisfied" but cautioned us that she would "appreciate the officer not being harassed, they have bad guys to deal with, not filling internet pages." She added: " ... treating a victim like a sideshow attraction is cruel and dangerous and feeds sociopaths ... please also understand that I am not under investigation."

On 24 June 2015 we spoke to a detective at Baker's local precinct, to whom we were referred by individuals connected with the Relentlessly Gay campaign. Although Baker had stated the previous day that police were "satisfied" with her claim, the detective to whom we spoke said that Baker was either unwilling or unable to produce the letter in question, and that she had maintained it was no longer in her possession. The detective also indicated that he had attempted to meet with Baker in person the previous day but was unable to do so.

The Baltimore County woman who raised more than $43,000 to decorate her home with rainbows after she said a neighbor wrote a threatening note about her “relentlessly gay” yard does not appear to have purchased any decorations.

Patch confirmed via the Baltimore County Police Department that an investigation was ongoing:

Cpl. John Wachter of the Baltimore County Police Department told Patch Thursday, July 23, that police have obtained the note, and the case is under investigation.

“The case, which is classified as [a] suspicious condition, remains [open] while detectives investigate what happened,” Wachter said.

Update: On 18 August 2015, Baker (or a representative for her) published an update to her GoFundMe page stating that all donations would be returned to Relentlessly Gay campaign donors:

A few months ago a fearful and ignorant act set off an avalanche. The avalanche was a thing of beauty, of support and of love. The snow kicked up into the sun and created a crystalline rainbow. Avalanches are relentless in their movement and breathtaking as they rumble down to the earth, shaking the ground. While thousands donated and thousands more offered support, the truth is that this project went from an artistic snow ball tossed in the face of hate to an avalanche. To deal with the debris, which includes taxes and an overabundance of resources it is with a saddened heart that all donations will be returned. If a time machine were available, it would have all ended at the original requested amount. It was never about the money but being happy in the face of intolerance. Do not for an instant think the support of spirit, art, love and monetary donations were for naught. A statement was heard across the globe, loud and clear was our avalanche. I ask you to take your donations back and give to local artists or educational nonprofit organizations.

Baker declined to elaborate with respect to doubts about the authenticity of the letter, nor did she specify when donors could expect to see their contributions returned.