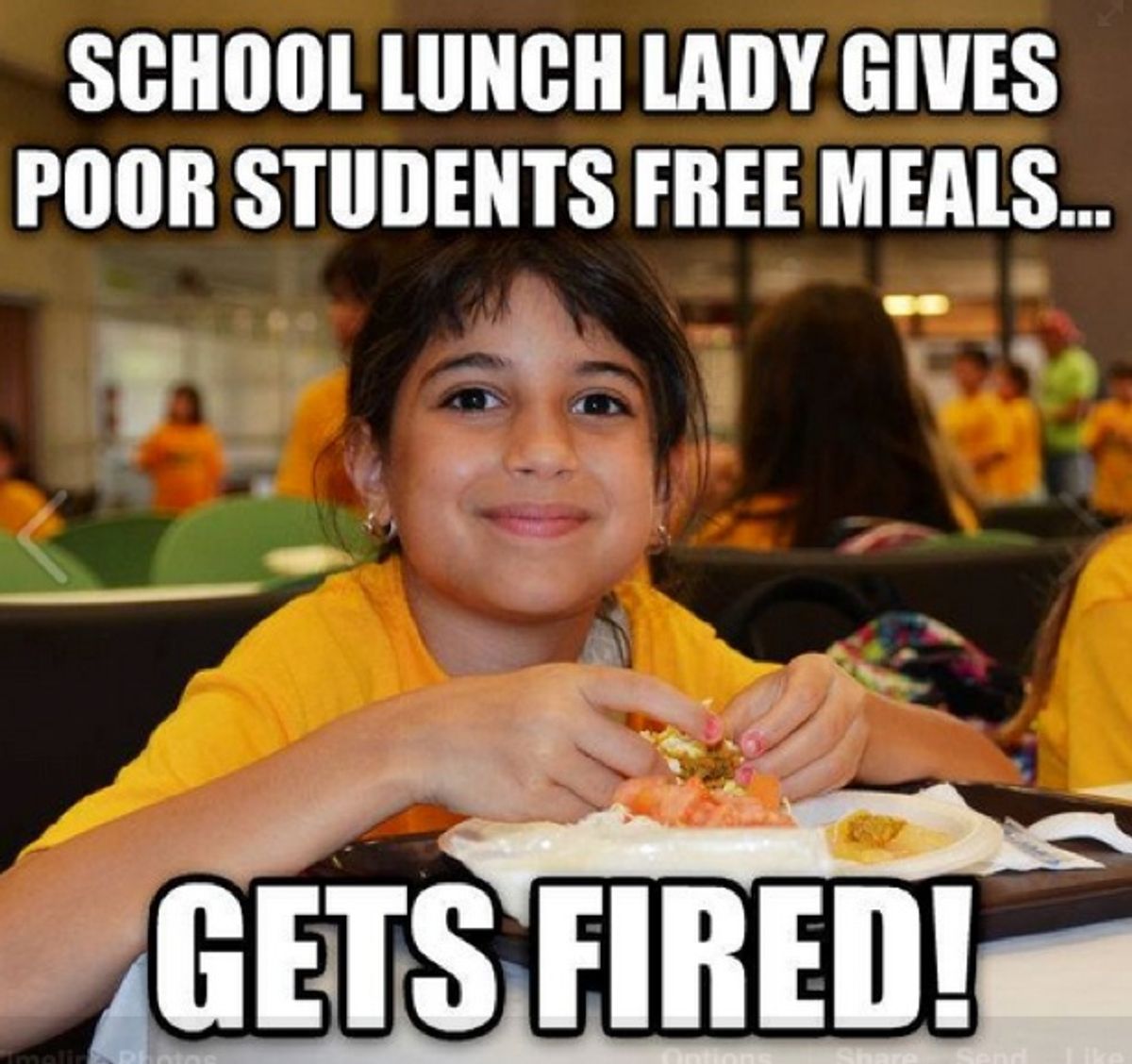 Della Curry says Cherry Creek School District fired her for giving free food to children who had no money to buy lunch.

Della Curry, a school kitchen manager in Aurora, Colorado, was fired for giving a free meal to a first-grader who was crying because she forgot her lunch money — and Curry says she'd do it again! SHARE now if Della should get her job back!

Origins:   On 29 May 2015, Della Curry, the former kitchen manager of Dakota Valley Elementary School in Aurora, Colorado, posted a statement on Facebook claiming that she had been fired from her position with the Cherry Creek School District because she gave "food to children that did not have money":

I was let go today from my position as a kitchen manager for Cherry Creek School District. I was fired for giving food to children that did not have money. While I know that what I did was legally wrong, I do not feel bad about it and I would do it again in a heartbeat. I will never understand how the "best" country in the world considers a cheese sandwich to be adequate nutrition for a child. I will never understand how one of the richest countries in the world cannot provide lunch for its children. I will find something better, the only part that hurts my heart right now is not getting to see all the kids that I have grown to love so much. Summer vacation just started a week early.

While Curry's original post only garnered a few thousand shares, her claim was subsequently picked up by a number of news outlets and popular Facebook pages. One such post published by the page US Uncut on 2 June 2015 was shared hundreds of thousands of times, and the subject "Cherry Creek School District" remained in Facebook's list of most popular topics for quite some time. (The child depicted in the widely-circulated meme pictured above was not identified and was likely not a student whose lack of lunch money prompted the controversy.)

While Colorado law prohibits the Cherry Creek School District from commenting on personnel matters, we would like to take this opportunity to provide information not covered in the CBS4 story.

Decisions regarding food service workers are made by the district Food and Nutrition Services department and not by a school's principal.

The law does not require the school district to provide a meal to children who have forgotten their lunch money — that is a district decision. According to our practice, we provide hot meals to students the first three times they forget their lunch money and charge their parents' accounts. The fourth time, we provide a cheese sandwich and milk. No child is ever allowed to go without lunch.

The district does receive some funding from the federal government for free and reduced lunches for children living in poverty. For those students who qualify for a reduced lunch price, we cover the remaining cost and do not charge the student. Nearly one-third of Cherry Creek School District students receive free lunches every day under the federal Free and Reduced lunch program.

The district has worked to keep lunch prices low and still meet the federal nutrition requirements. The costs of our lunch program are not covered by the prices we charge. At the end of the year, any unpaid accounts are covered by the general fund which also includes instruction, security, building maintenance and overall operations.

Again, no child is ever denied a meal due to the inability to pay.

The statement indicated that children who lacked money were supplied with cheese sandwiches only after three incidents of inability to pay. (The CBS4 article referenced by the district was amended to reflect Cherry Creek Schools' statement.)

On 4 June 2015, Denver television station KUSA published an article titled "District: Lunch Worker Not Fired for Giving Away Food." That article included portions of a statement released by Cherry Creek Schools (date not supplied) in which the district pivoted from their earlier comment: While their 2 June 2015 statement detailed a lack of extant legal obligation to provide children lunches (and a district policy of serving cheese sandwiches to children without money), the statement published by KUSA on 4 June 2015 asserted Curry had been terminated for reasons not previously referenced by the district (reasons which they could not publicly disclosed without her permission):

Unfortunately, inaccurate information has been provided to the media by a former Cherry Creek School District employee. Ms. Curry was not dismissed for giving free food to financially disadvantaged students.

Numerous documented incidents resulted in the action taken by the Cherry Creek School District. Currently, we are unable to fully disclose all of the details concerning her dismissal without her permission, which she presently has declined to give. Should she change her mind, we will release all of the information associated with this investigation.

The Denver Post followed suit in a 4 June 2015 Editorial Board article titled "For Now, Take Della Curry's Story with a Grain of Salt," suggesting it was incumbent upon Curry to release her employment record following the district's call for her to do so:

Della Curry has become something of a celebrity, having been interviewed by major media outlets around the country and even abroad. And her story, that she was fired by Cherry Creek Schools for giving hot lunches to students who didn't have the money to pay for them, is instantly compelling.

Except for one serious problem: The district vehemently disputes her version of events and insists she was fired instead for "numerous documented incidents."

Not so fast. The district could divulge details of Curry's personnel file with her permission, and then we'd know the truth. But Curry hasn't signed a waiver. Until she does, her story ought to be taken with a handful of salt.

However, such a suggestion might be fraught with unintended privacy-related consequences. Depending upon the content of such a record, otherwise protected and private information (such as a chronic illness) could be revealed should she waive that right. Furthermore, Curry's future employment prospects could be restricted by the release of information not otherwise available to potential employers in the course of job candidacy.

In a 4 June 2015 statement Curry posted to her Facebook page "No Child Goes Hungry," she acknowledged and declined the district's request she waive her right to privacy and release the record.

While the Denver Post implied Curry's refusal was suspect, it should also be noted that in their 2 June 2015 statement the Cherry Creek School District did not claim Curry was fired for other reasons; instead, the district focused on their policies concerning lunch options for children without money. It was apparently only later that the district changed course and requested Curry release her records, records that could reveal other (unrelated) private information to the public.

The situation indeed seemed to be somewhat "he said, she said," although both "he and she" said things suggesting the matter at hand was whether children without lunch money ought to be subject to district policies pertaining to such, and the calls for Curry to waive her legal protections came only after the controversy had raged on social media for several days.