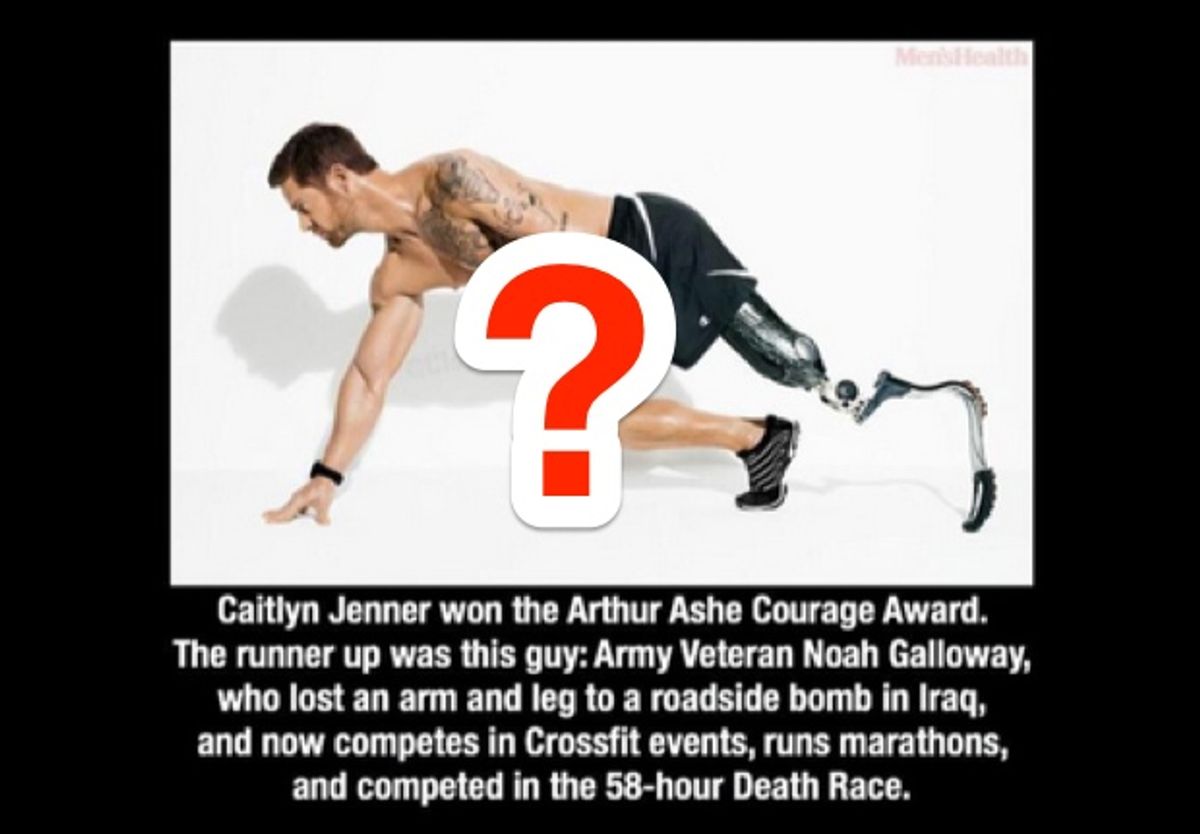 Caitlyn Jenner will receive the Arthur Ashe Courage Award from ESPN, but critics say others such as Noah Galloway or Lauren Hill should have been chosen instead.

On 1 June 2015, the Olympic medal-winning athlete and reality TV star formerly known as Bruce Jenner formally announced her new name of Caitlyn Jenner as part of the gender transition process.

Caitlyn Jenner drew significant buzz on 1 June 2015 when she debuted her name and appeared on the cover of Vanity Fair in a photo set captured by Annie Leibovitz. On that same day, the sports news network ESPN announced that Jenner would be honored with their Arthur Ashe Courage Award during the upcoming 15 July 2015 telecast of the ESPY ceremonies (an event recognizing individual and team athletic achievement and other sports-related performances).

In a statement dated 2 June 2015, ESPN executive producer Maura Mandt said of their decision to recognize Jenner with an ESPY:

Bruce [Jenner] has received many accolades over the years for being one of the greatest Olympians of our time, but The ESPYS are honored to celebrate Bruce becoming Caitlyn. She has shown the courage to embrace a truth that had been hidden for years, and to embark on a journey that may not only give comfort to those facing similar circumstances, but can also help to educate people on the challenges that the transgender community faces.

(Another version of the release, dated 1 June 2015, is available here.)

Jenner was quoted in the release as well, citing Arthur Ashe (the African-American tennis star for whom the ESPY Courage Award was named) as a personal hero of hers. (Incidentally, the document also stated that Jenner's transition from Bruce to Caitlyn officially occurred on 15 March 2015):

In the past few months, the overwhelming outpouring of support from all over the world for my journey has been incredible. However, being honored with this award, which is named after one of my heroes, is truly special. For the first time this July, I will be able to stand as my true self in front of my peers.

Ahead of ESPN's press release, TMZ reported news of the award on 1 June 2015 at 10:38 AM PDT. The article described the Arthur Ashe Courage Award as one awarded to athletes who exhibit "strength in the face of adversity, courage in the face of peril and the willingness to stand up for their beliefs no matter what the cost."

Immediately prior to the tweet shown above, Callahan tweeted:

While neither tweet amounted to much more than one user's opinion of Caitlyn Jenner, the notion of Galloway as a more deserving recipient of the award soon became a meme of sorts on social media sites. Other tweets (whether straightforward or facetious) added to the the quickly-formed impression that Galloway had been considered but passed over for the Arthur Ashe Courage Award ESPY in favor of Jenner:

Hi @ESPYS so glad you're honoring Caitlyn Jenner but I also hope you find a way to also honor Noah Galloway. Thanks. pic.twitter.com/eOi9Ml3cEP

Amid burgeoning Twitter backlash over the announcement, both Galloway and the late college basketball player Lauren Hill were cited as deserving nominees slighted by the choice of Jenner:

I'm sorry, but "Caitlyn" Jenner never should have been considered for the authur ashe courage award over Noah Galloway. — Ryan (@ryangentry4) June 2, 2015

Rapidly, what appeared to have started as a joke seemed to be genuinely angering some social media users:

With all due respect to Caitlyn Jenner, the RUNNER UP to the Arthur Ashe award is @Noah_Galloway? Seriously? Thanks for being you Noah!

However, none of the content of ESPN's press release mentioned Noah Galloway (or Lauren Hill) by name as contenders for the 2015 Arthur Ashe Courage Award. The idea that Galloway was specifically passed over in favor of Jenner appeared to have stemmed from a joke made by a Twitter user (who also mocked Jenner's choice of name).

While it's true Jenner is set to receive the ESPY award in July 2015, it does not appear any "runner up" was announced or bypassed in favor of Jenner. More likely is a scenario under which ESPN held their press release until Jenner had publicly revealed her new name and likeness, at which time the network (in a manner likely predetermined based on Jenner's pending announcement) released a document containing information that was up until that day closely protected.

Update, 3 June 2015: On 3 June 2015, MTV published an article that included a comment from ESPN regarding the "runner up" controversy:

In a statement to MTV News on Wednesday (June 3), an ESPN spokesperson confirmed there is “no such thing as a runner up for the three major awards,” referring to the Arthur Ashe Courage award, the Pat Tillman Award for Service and the Jimmy V Perseverance Award.

The Arthur Ashe Courage Award is meant to honor individuals whose contributions transcend sports through courageous action. Sometimes that courage is demonstrated over the course of a lifetime and sometimes it is demonstrated in a single act that shines a light on an important contemporary issue.  At all times, there are many worthy candidates. This year, we are proud to honor Caitlyn Jenner embracing her identity and doing so in a public way to help move forward a constructive dialogue about progress and acceptance.