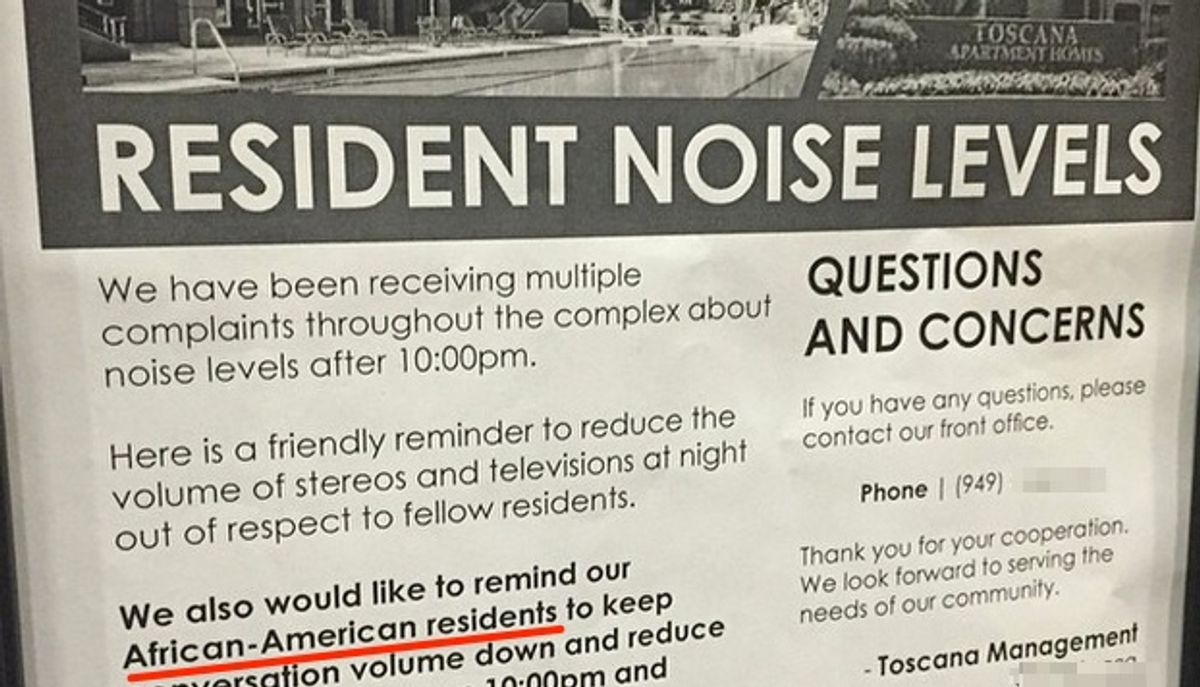 A property management company that administers an apartment complex in Irvine, California, has been accused — unfairly, they maintain — of posting racist flyers in residential elevators.

On 29 May 2015, a photograph of a sign (actually a flyer) purportedly displayed in elevators at an apartment complex (adjacent to but not affiliated with the University of California, Irvine) operated by Toscana Management began to circulate on social media sites. The image was controversial due to the flyer's highlighted instruction singling out "African-American residents" to keep conversation and music levels down during sleeping hours.

On the morning of 29 May 2015, Jezebel published an article about the flyer in which author Jia Tolentino wrote:

Nothing to see here, just a normal sign from a cool residential management company with specific noise control instructions for black people. No big deal at all.   This is the most blatant racism I’ve seen in a minute, and 100% illegal under multiple provisions of the California Fair Employment and Housing Act and the Unruh Civil Rights Act. We’ve called Toscana Management and are awaiting their comment.

**Toscana Apartments are not affiliated w/ UC Irvine & we do not condone the flyer's message. UCI is addressing this w/ apt. mgt & the city.

The tweet's sole commenter addressed a seeming implausibility in the claim: Was it likely a business would engage in such unvarnished racially insensitive behavior, especially given that their profitability hinges upon their following a variety of housing laws (many of which prohibit discriminatory treatment of residents based on their race)? As it turned out, that line of reasoning was likely not far off the mark. Gawker (of which Jezebel is a subsidiary) later published an article in which a representative from Equity (Toscana's parent company) explained that the flyer was neither issued nor sanctioned by the company:

“This flyer is a fake. It wasn’t produced by us. It wasn’t posted by us. I don’t know where it came from,” Equity representative Marty McKenna said. The flyer — a notice about noise complaints in Irvine’s Toscana apartment complex — included a bolded section directed specifically at African-American residents. McKenna said that Equity, a national company which owns the Toscana Apartments, is investigating the origin of the flyer. He added that the company does not have a practice of posting flyers about noise complaints, preferring instead to contact residents by email. “It is not from us, and certainly we don’t condone that kind of messaging,” he said.

The denial was not accepted by the image's original poster, who remained convinced the flyer was legitimately posted by the building's management. The woman (who originally shared the flyer via Instagram) posted a screenshot of the denials and her replies: The original poster pointed to use of company letterhead in the photocopied flyer as proof it was issued by building management, but letterhead can easily be reproduced by anyone with a printer. It's possible that the flyer was published by a racist fellow resident or by a prankster simply looking to stir up controversy.