Jim Bob Duggar: Rape and Incest Should be Capital Crimes? 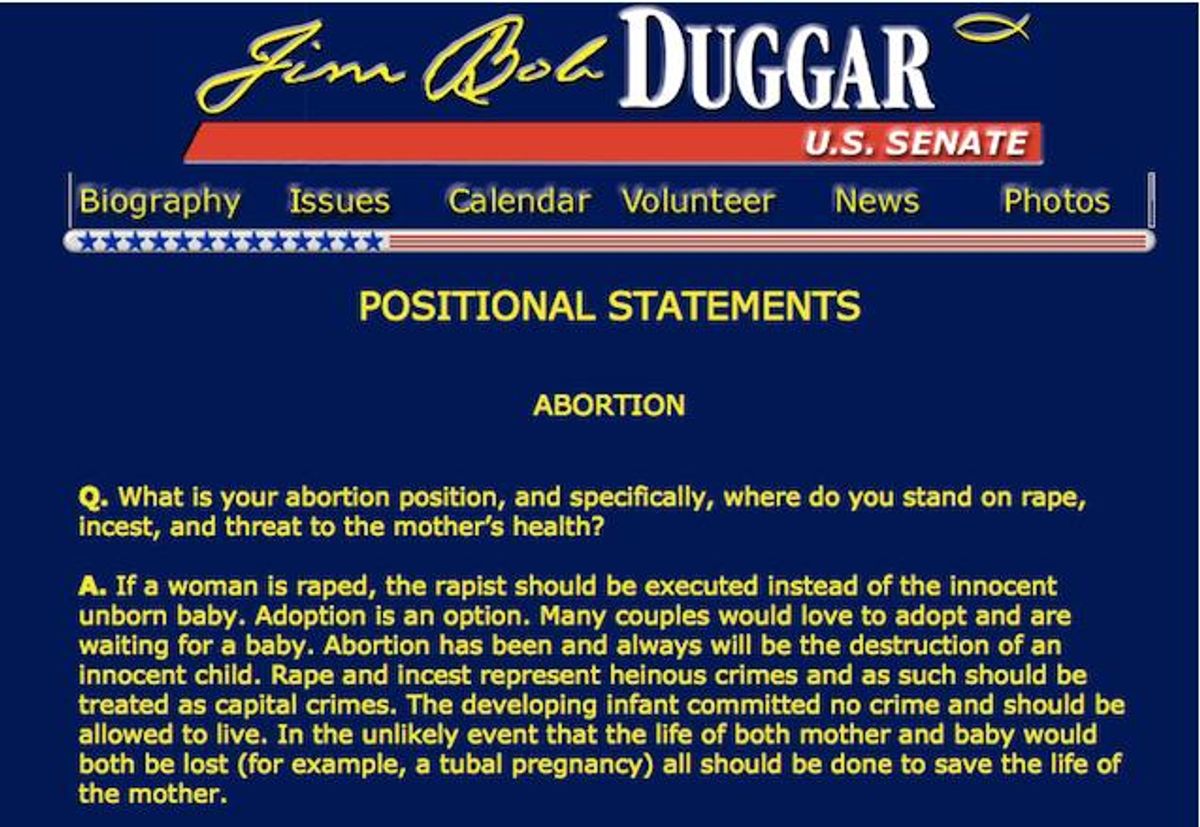 The news broke in May 2015 that 27-year-old Josh Duggar, son of Jim Bob and Michelle Duggar, the stars of TLC reality series 19 Kids and Counting, had been implicated in multiple instances of sexual misconduct back when he was a teen — reportedly including some instances involving his sisters. (Josh Duggar himself acknowledged the truth of the reports, although he did not mention that any of his wrongdoings might have involved his sisters).

Shortly afterwards, netizens dug up an archived version of what was described as the web site from Jim Bob Duggar's 2002 U.S. Senate campaign, in which he ran as the "ONLY Pro-Life candidate for U.S. Senate in the State of Arkansas." That site included a "Positions" page visitors were encouraged to read with the assurance "that not only is Jim Bob Dugger the only candidate that will so clearly SAY what he BELIEVES, but he is also a candidate that you can be certain will DO what SAYS!" The page in question outlined the candidate's viewpoints on a number of issues, with the subject of abortion heading the list, and included a passage declaring that rape and incest should be punishable by death:

Q. What is your abortion position, and specifically, where do you stand on rape, incest, and threat to the mother’s health?

A. If a woman is raped, the rapist should be executed instead of the innocent unborn baby. Adoption is an option. Many couples would love to adopt and are waiting for a baby. Abortion has been and always will be the destruction of an innocent child. Rape and incest represent heinous crimes and as such should be treated as capital crimes. The developing infant committed no crime and should be allowed to live. In the unlikely event that the life of both mother and baby would both be lost (for example, a tubal pregnancy) all should be done to save the life of the mother.

Many web pundits characterized this development as being either ironic or hypocritical on the Duggars' part, although we have not seen any credible reports indicating that Josh Duggar's sexual misconduct actually involved incestuous activity (i.e, sexual intercourse) with any of his sisters.

The Jim Bob web site transitioned in 2003 from being a political campaign site to the "The Official Website of the Duggar Family," and the domain name appears to have been abandoned by the Duggars (and subsequently purchased by an unrelated entity) in early 2013.