Is This 'Zombie Chicken' Video Real?

Ikizukuri is the preparation of sashimi from live seafood. 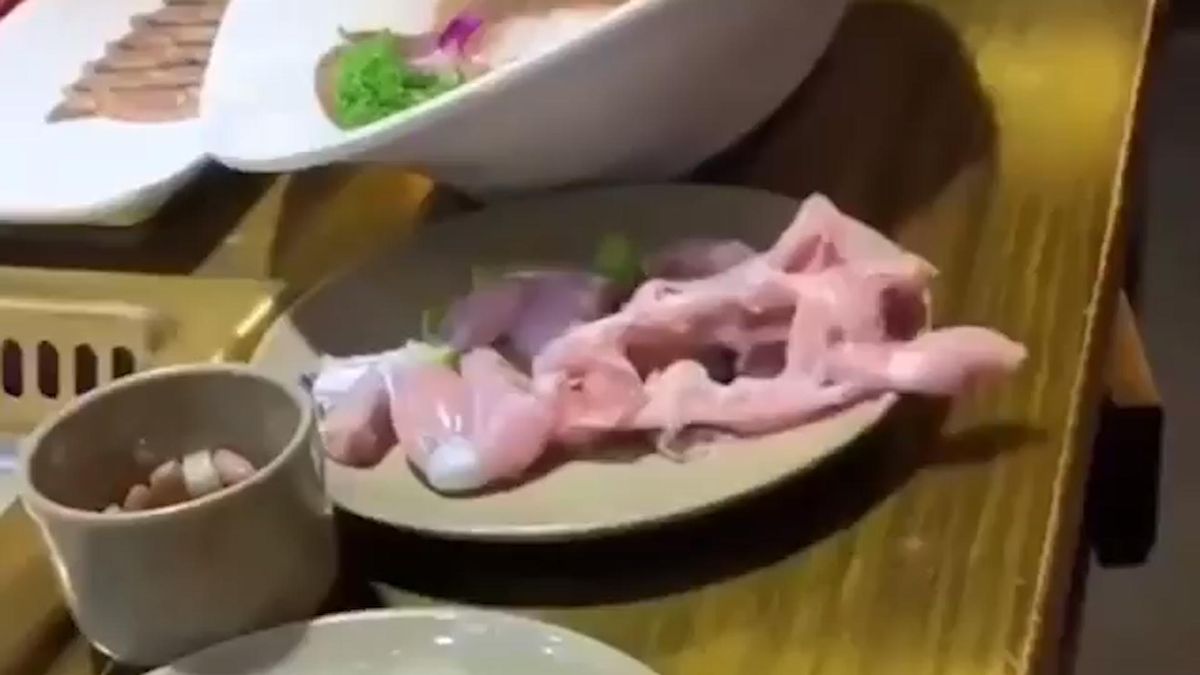 Claim:
A video shows a piece of raw chicken meat "twitching" off of a dinner table.
Rating:

While it's not entirely clear what type of meat this video shows, it is likely frog, not chicken.

A video supposedly showing a piece of raw meat twitching its way off of a dinner table went viral in July 2019. This video was shared by several different outlets under a variety of captions, but most referred to it as the "zombie chicken" video:

The video first starting circulating on Chinese social media sites such as Weibo around June 2019. When the video reached English outlets about a week later, it was frequently accompanied by jokes about "zombie chicken." However, when Hong Kong News covered this video on June 17, reporters identified the animal as a recently skinned frog. An early posting from the 笑一笑没烦恼 (Laugh, no worries) Facebook page also identified this "zombie" meat as frog.

These sources don't appear to have any first-hand knowledge of the incident, however, so we should take their claims with a grain of salt, too.

Speaking of salt ... This video shows an extremely fresh cut of meat. While this animal is certainly dead, it's neurons are still active and seem to be reacting to sodium ion, a chemical compound that can be found in salt and soy sauce.

When the Scientific American looked into a similar video back in 2011, they explained:

When a creature dies, its neurons don't stop working right away. So long as there is still enough energy around to maintain that membrane potential, the neurons will work.

What you might have noticed is that in the case of the dancing dead, the cooks have added one key ingredient: salt (soy sauce is very salty). Salt — or sodium chloride — is chock full of sodium ions. This overwhelming dose of sodium ions is enough to trigger the still-working neurons into firing, signaling the muscles to contract.

Scientific American was commenting on the following video from 2009. While the reaction in this footage is not as severe, it does show how salt can cause a raw piece of meat to twitch:

An article from Brain Stuff further explained why these dead animals appear to "dance" when salted:

As you can see, the chef is preparing frog legs for dinner. He has skinned the frog legs and they are ready to be cooked. When he salts them, the muscles start twitching. The obvious question: why does that happen?

Because these are fresh frog legs, the cells inside them are all still intact. The biochemical machinery still functions. There is still a source of energy for the muscles in the form of unused ATP molecules stored in the cells. All that the muscles need is something to activate them and they can still contract and relax (until they run out of ATP or something else shuts down the biochemical machinery)...

In a living frog, it is a nerve signal from the brain that tells the muscle to contract. In this case, it is the sodium in the salt.

While we have been unable to track down the exact origins of this video, this footage likely was filmed at a restaurant that practices ikizukuri, which is a method of preparing live seafood. This method of preparation is most commonly used with fish, but octopus, shrimp, lobster, and frogs can also be prepared this way.

In 2012, a restaurant in Tokyo found itself in the path of protesters after a video showing the making of a live frog sashimi dish went viral. Here's how Fox News described that video (which can be seen here):

In the video, a large frog is stabbed, skinned, gutted and served up on an iced plate with a lemon slice and soy sauce. Though the frog is killed instantly by the chef’s knife, it takes a few agonizing minutes for the frog to stop moving. In those moments, you see the creature's eyes blinking back at the camera while maudlin music plays in the background, and at points the frog flails its arms and flops around on the dish, while its heart is still beating.

Although we can't confirm many of the details about this "" "zombie frog" video, it certainly falls within the realm of plausibility.