Are These Rumors True About Zodiac Killer?

Allegedly, he was a fan of Lady Gaga, trolled Ted Bundy online, and had a friend who wanted the world to know about his murderous past. 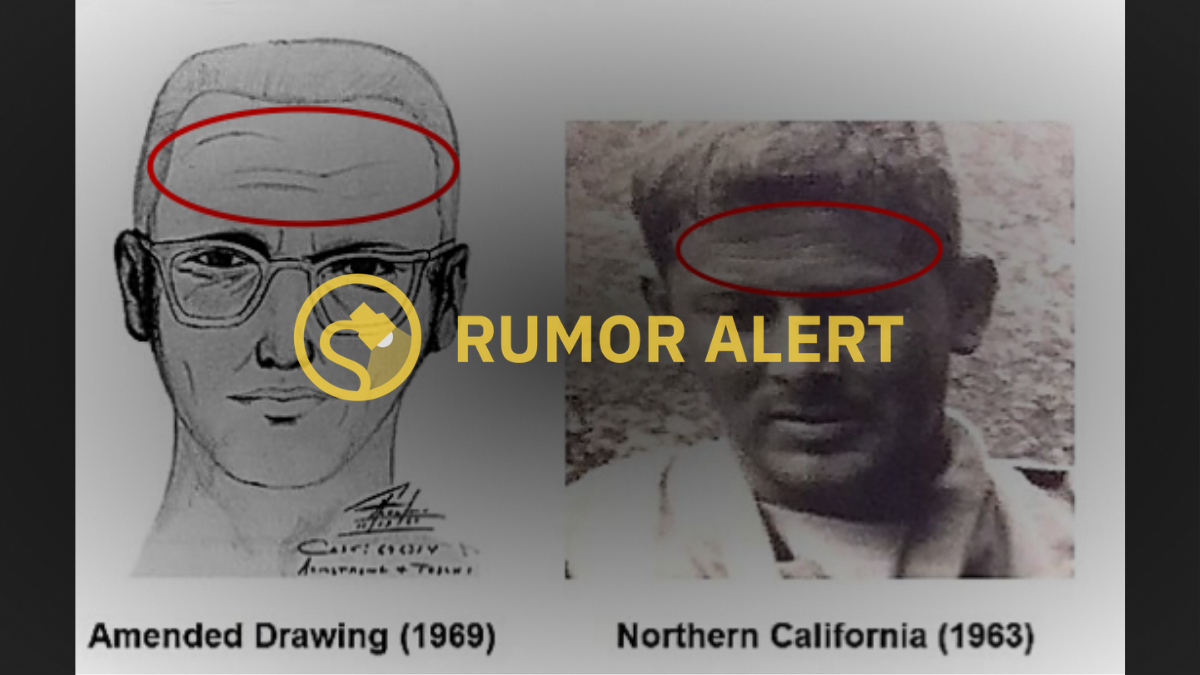 Claim:
Screenshots that surfaced online in early October 2021 authentically show photographs of, or comments written by, the Zodiac killer.
Rating:

A team of private investigators, called the "Case Breakers," claimed to have uncovered evidence to pin the prolific series of unsolved murders that terrorized Northern California in the late 1960s on a man who died in 2018. As a result, Internet sleuths circulated numerous posts supposedly showing traces of the man's internet persona. However, it was erroneous to claim those posts showed genuine photographs of, or comments written by, the Zodiac killer because federal and local investigators tasked with solving the cold case have not identified a suspect, as of this writing.

In early October 2021, a group of private investigators announced it had evidence that a California man who died several years prior was the Zodiac Killer. Despite the lack of confirmation from law enforcement authorities on the veracity of that belief, the revelation sparked news stories, as well as makeshift investigations by social media users into the man's life before his death.

In short, popular tweets and Reddit threads made numerous allegations, such as the Zodiac killer was a Lady Gaga fan; trolled serial killer Ted Bundy online; supported the Minnesota Vikings' NFL team; and had a friend who wanted the world to know about his murderous past.

Numerous Snopes readers sent us requests, or searched our site, for truth behind those rumors — as well as reliable information on whether the 52-year-old mystery was indeed solved. The rumors were fueled by the work of the "Case Breakers" — a group of roughly 40 former law enforcement officers, prosecutors, journalists, and intelligence officials who aim to solve murder cases.

After supposedly comparing photographs to a police sketch, analyzing anagrams, and interviewing witnesses, the Case Breakers in early October released the name of the man who they believed terrorized northern California in the late 1960s as the Zodiac. Some media outlets, such as Fox News and Deadline, published stories identifying the man.

“I absolutely feel we solved this case,” Tom Colbert, a member of the group, told the San Francisco Chronicle.

“There’s no ego here,” he continued. “We do this to solve cases.”

The Chronicle's newsroom, as well as police, get hundreds of tips every year on potential Zodiac suspects and solutions to the case, according to the newspaper.

For instance, a team led by a former California Highway Patrol Officer announced in 2011 that it believed a 91-year-old former real estate agent was responsible for the slayings; however, investigators said there wasn't enough evidence to substantiate the theory.

Cue the Case Breakers' October 2021 announcement. In addition to five killings in 1968 and 1969 in the Bay Area (murders that the FBI has conclusively linked to the Zodiac), the Case Breakers believe the serial killer also murdered Cheri Jo Bates, an 18-year-old woman slain hours away in Southern California's Riverside in 1966.

However, Riverside Police Officer Ryan Railsback debunked that theory in an interview with the Chronicle. "If you read what they (the Case Breakers) put out, it’s all circumstantial evidence. It’s not a whole lot," Railsback told that newspaper.

In fact, federal and local investigators tasked with solving the Zodiac case aren't sold on any of the private team's findings; they say the search to find the Zodiac remains ongoing.

"Sources at both agencies [the FBI and San Francisco Police Department] told The Chronicle the evidence presented by the Case Breakers does not appear to be conclusive," the newspaper reported.

When we reached out to the FBI ourselves, its communications team referred us to the above-displayed tweet.

Snopes also contacted the San Francisco Police Department, and a spokesperson responded via email: "The SFPD's investigation into the Zodiac case is open and ongoing. As a consequence we cannot comment further on the investigation."

Because the agencies consider the case ongoing, Snopes is not naming the man who the Case Breakers believes was the Zodiac — apparently an Air Force veteran who died in 2018. For the purpose of this report, we will call him "the Case Breakers' man." He lived in the Sierra foothills and died at the age of 80, according to the Chronicle, which cited court records.

Journalists with that newspaper reportedly spoke with a relative of the man six years before the Case Breakers' October 2021 announcement. Also, they talked to the man's daughter-in-law on Oct. 6, and she said that she believes the Case Breakers "nailed the killer." The Chronicle published:

The Chronicle was called six years ago by a relative of the Case Breakers suspect, who said the man lived in Groveland (Tuolumne County) and had tried to kill him with a hammer. He contacted investigators, but when The Chronicle followed up with law enforcement, they said the Zodiac connection did not appear to be there.

The Groveland man’s former daughter-in-law told The Chronicle on Wednesday that she was intimately familiar with the other relative’s fears, and she believes the Case Breakers have nailed the killer. She lives out of state and said she moved to get away from threats from the man and his supporters. The Case Breakers suspect died in 2018 of natural causes, she said. County records show he was 80.

“It’s my birthday today, and this all coming out is a great birthday present for me,” said Michelle Wynn, 52. The Case Breakers suspect “is the Zodiac, without a doubt. Being around him, knowing his demeanor and his shadiness and twistedness — I have an intuition, I can read people.”

In short, while a team of private investigators claimed to have identified the Zodiac and a relative of that man reportedly told journalists that she believed he was "the Zodiac without a doubt," federal and local law enforcement agencies including the FBI have not confirmed — nor given any indication — that that was indeed true.

Additionally, critics of the Case Breakers' findings include Michael Hobbes, of the Huffington Post and the podcast, “You’re Wrong About," and Jay Barmann, a writer for SF News. Was The Zodiac a Lady Gaga, Minnesota Vikings Fan?

After some news reports published the full name of the Case Breakers' man, Twitter did what Twitter does best — ragtag sleuthing and meme-ing.

On Oct. 8, Barstool Sports compiled a sample of theories circulating widely about the man under the headline, "Alleged Zodiac Killer Had Ironic Internet Presence."

That piece cited viral tweets claiming the following: that the Zodiac had supposedly left a glowing review of Lady Gaga's 2016 "Joanne" album on metacritic.com; trolled Ted Bundy in a review on an IMDb page; and had a friend who repeatedly outed him as the person behind the brutal slayings on social media.

Let us start with the assertion that the serial killer was among Gaga's Little Monsters. The Barstool Sports' piece included a tweet supposedly showing screenshots of the Case Breakers' man leaving a comment on the metacritic.com profile of "Joanne," on Oct. 24, 2016, reading: "A national treasure, like myself." However, we analyzed thousands of reviews on the album's profile, including those published on Oct. 24, 2016, and found no such remark.

The screenshot appeared to be a digital creation. Over the course of hours, other Twitter users meme-afied the concept with similarly edited images, supposedly showing the man's affinity for various video games, bands, and musical artists.

The claim about the 2015 documentary titled "The Hunt for Ted Bundy" seemed to be the same thing: An unknown digital artist apparently replicated the look and design of an IDMb review to make it seem like the Case Breaker man left the review, "Awful. Would give less than 1 star if I could. Ted Bundy is wildly overrated." We came to that conclusion by studying the documentary's actual IMDb page, which only had one review and was not the phrases pictured above.

Next, we addressed the rumor about a friend to the Case Breakers' man "trying to tell everyone" about his murderous past.

There was no verified evidence to prove the friend was a real person who knew the Case Breakers' man, and/or that he had authored the alleged posts about the Zodiac. If there was any reason to consider their authenticity, journalists with reputable news outlets, such as the Chronicle, would attempt to interview the purported friend. That had not happened, as of this writing, however.

We reached out the viral tweet's author to learn how, or with what evidence, they obtained photographs supposedly showing the Case Breakers' man and the friend, as well as screenshots of the friend supposedly calling the former man the Zodiac. We haven't heard back, but we will update this report if that changes.

Additionally, tweets and Reddit threads circulated photos of someone who they believed was the Case Breakers' man wearing a hat representing the Minnesota Vikings NFL team. Several sports blogs recirculated that allegation, too. However, no evidence proved that the man pictured above in a Vikings hat was the same person as the Case Breakers' man. The picture matched the profile photograph for a Facebook account with the same name, however — an account that had little activity viewable to the public aside from a July 2011 post sharing a Washington Post article about Casey Anthony.

All of this said, it was impossible for social media users' investigations into the Case Breakers' man to prove anything about the Zodiac killer — that he was a Lady Gaga fan, Viking's supporter, Bundy troll, etc. — because federal and local investigators tasked with solving the case refuted the private team's work, and considered the person behind the prolific slayings unknown. For that reason, we rate this claim "False."

“Case of the Zodiac Killer Takes Another Twist – but Police Say It Isn’t Solved.” The Guardian, 8 Oct. 2021, https://www.theguardian.com/us-news/2021/oct/08/zodiac-killer-investigation.

This report was updated to note the FBI's response to Snopes' inquiry about its investigation into the Zodiac case.

This report was updated to include the San Francisco Police Department's response to Snopes' inquiry about its investigation.