An unsubstantiated theory suggesting a Monsanto pesticide caused an uptick in microcephaly births in Brazil reached a tipping point when it was promoted by George Takei. 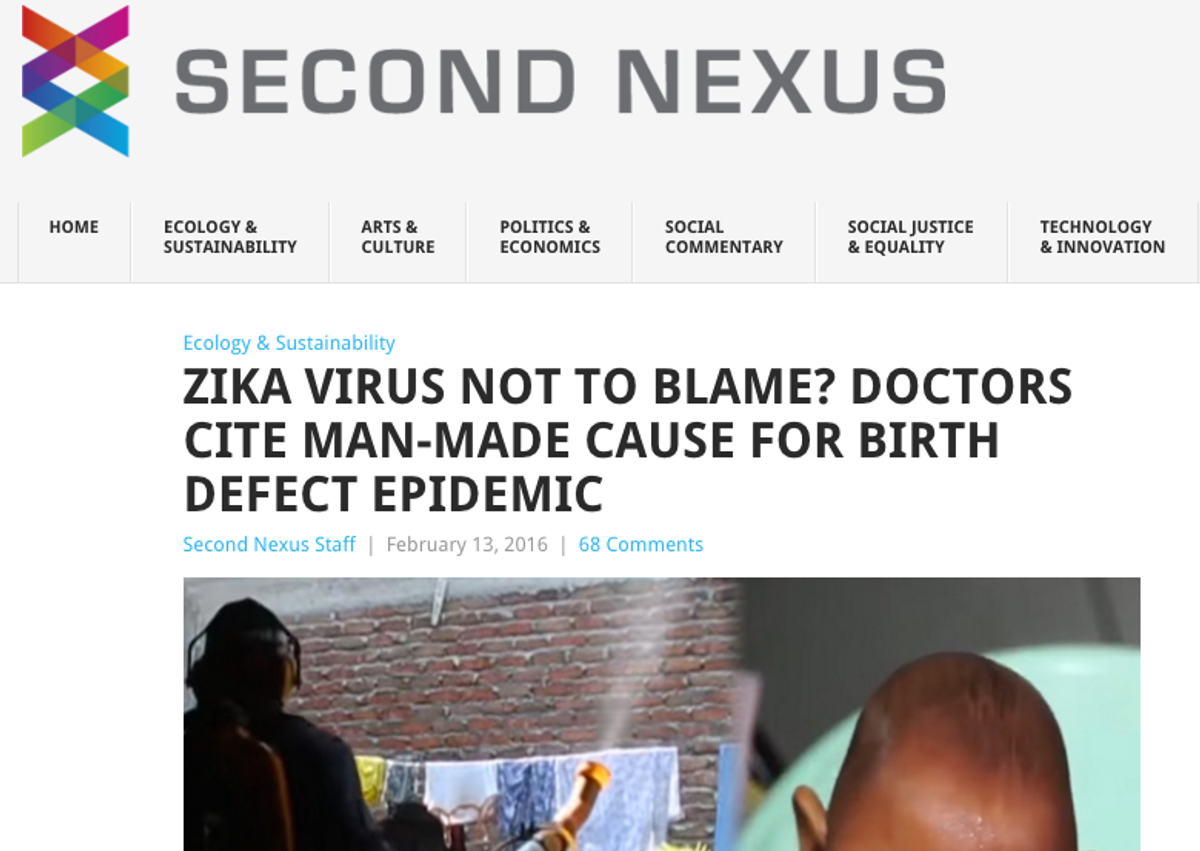 Claim:
Doctors believe an increased number of microcephaly cases in Brazil is due to the use of a Monsanto-manufactured pesticide.
Rating:

Multiple credible public health experts are investigating a concurrent outbreak of Zika virus and uptick in cases of microcephaly in Brazil.

The specific relationship (if any) between Zika virus and microcephaly cases in Brazil.

An outbreak of Zika virus and a rash of babies born with microcephaly (an abnormally small head) has led to the World Health Organization declaring a public health emergency, along with widespread speculation that the two conditions are linked.

On 14 February 2016, Star Trek's George Takei shared the above-reproduced Facebook post linking to an article that claimed pesticides were responsible for the microcephaly births:

If this study bears out, we shall have much soul-searching to do indeed.

Takei's notoriety on Facebook meant that the study was shared widely, leading to even more widespread concern about the claims made in the item, which was originally published the day before on a web site called Second Nexus.

Second Nexus doesn't appear to be a site devoted to science or medicine. Its "About" page described it as "a New York City-based digital publication bringing newsworthy content in close conjunction with a powerful network of social media platforms." Presumably, Takei's extremely popular page constituted a "powerful ... social media platform."

The article in question was not specifically bylined (attributed to "Second Nexus Staff") and reported:

The Zika virus has been blamed for thousands of cases of the birth defect microcephaly, a condition in which babies are born with severely shrunken heads and brain damage. But now a medical organization is challenging that connection, saying that the chemical larvicide Pyriproxyfen is instead to blame.

The Argentine organization Doctors in the Crop-Sprayed Towns says that most affected children live in areas in which the chemical was added in 2014 to local drinking water in an attempt to control mosquito populations. The larvicide is used to create malformations in mosquito larvae, in order to impair their development and reproductive abilities. Pyriproxyfen is manufactured by Sumitomo Chemical, a Japanese strategic partner of Monsanto.

“Malformations detected in thousands of children from pregnant women living in areas where the Brazilian state added Pyriproxyfen to drinking water are not a coincidence, even though the Ministry of Health places a direct blame on the Zika virus for this damage,” said the doctors.

Only one group was quoted in the story: an Argentinian advocacy group  called "Medicos de Pueblos Fumigados," called "Doctors [or Physicians] in Crop-Sprayed Towns." No portion of the article cited any specific evidence that supported the inference that pyriproxyfen had anything to do with an uptick in microcephaly cases in Brazil. It only stated that the larvicide was present in water and included a quote that the births were "not a coincidence."

Medicos de Pueblos Fumigados is a group of doctors and activists critical of increased use of pesticide sprays in poverty-stricken areas in Brazil and Argentina, advocating "community-based" and multipronged solutions to address outbreaks of diseases such as dengue or Zika.

However, the group's statement (upon which the Second Nexus article was based) only stressed caution and an "urgent" need for more research into possible links between microcephaly and larvicide, not that there was an undeniable connection:

On January 2016, the Brazilian Association for Collective Health (ABRASCO) published a Technical Note and Open Letter to the People of Brazil(1), questioning the linear analysis carried out by the Ministry of Health of Brazil, which linked the emergent congenital malformations to Zika, leaving aside other factors that can have an influence on the problem, and minimising the fact that the widespread epidemic in the Pacific and the current epidemic in Colombia, resulted in no cases of malformations, much less microcephaly.

Above all, the role of the chemical model for vector control is ignored. This model, implying the mass usage of chemical poisons in order to reduce or eradicate the presence of mosquitoes, has been carried out in the most vulnerable areas of Northeast Brazil for 40 years, whilst the epidemics, poverty, social marginalisation, deforestation, and climate change have multiplied.

Since the second half of 2014, the Brazilian Ministry of Health(5) stopped using temephos (an organophosphate agrotoxic to which Aedes larvae became resistant) as larvicide, massively incorporating the poison Pyroproxyfen, commercially known as Sumilarv and manufactured by Sumimoto Chemical, a Japanese company associated to or subsidiary of Monsanto in Latin America (1,5). The spatial distribution by place of residence of mothers of children born with microcephaly shows a higher concentration in the poorest areas of Northeastern Brazil, with poor urbanisation and inadequate sanitation....

Malformations detected in thousands of children from pregnant women living in areas where the Brazilian state added pyriproxyfen to drinking water is not a coincidence, even though the Ministry of Health places a direct blame on Zika virus for this damage, while trying to ignore its responsibility and ruling out the hypothesis of direct and cumulative chemical damage caused by years of endocrine and immunological disruption of the affected population. Doctors from the Brazilian Association for Collective Health (ABRASCO) demand that urgent epidemiological studies taking into account this causal link be carried out, especially when among 3,893 cases of malformations confirmed until January 20, 2016, 49 children have died and only five of them were confirmed to have been infected with Zika(1).

A 16 February 2016 Grist reaction piece maintained that "'caution' — in this case, not using the pesticide — is more likely to cause more harm than the alternative," adding:

The origin of the pesticide theory was, surprise surprise, a small physicians’ group that campaigns against pesticides. The group hasn’t done any epidemiology to demonstrate that people exposed to the pesticide are more likely to have babies with microcephaly; it has simply laid out an argument. The mainstream groups, looking at this problem holistically, have said there’s much better evidence that mosquitoes are hurting people than the evidence (and there’s no evidence, really) that the stuff killing mosquitoes is hurting people.

That item then pointed out what appeared to be a gaping hole in the unsupported pyroproxyfen/microcephaly link theory:

Perhaps the biggest problem with the theory that this pesticide is causing microcephaly is that it’s used in lots of places where there has been no increase in microcephaly. Farmers use it in the U.S. Pyriproxyfen is one of the safer pesticides out there. It breaks down in sunlight. Its toxicity is low enough that the EPA allows farmers to spray it on crops just seven days before harvest. In South America, officials started using the pesticide more than a decade before the microcephaly surge.

All of this information is readily available to any genuine scientist looking dispassionately at the potential causes of the Zika virus outbreak or the rise in malformations in Brazil. Also readily available is the knowledge that the use of pyriproxifen is driven by WHO recommendations and not the marketing activity of any multinational or other corporation.

The potential human health consequences of discouraging the use of pyriproxyfen in drinking water storage and other mosquito-reduction programs is catastrophic with potential deaths and serious disease from otherwise avoidable malaria, dengue and other mosquito-borne diseases numbered in at least the hundreds of thousands. If these reports and suggestions are motivated by anything other than ignorance and poor scholarship they are deserving of the most strident condemnation.

Journalists covering this story would do well to research the background of those making and reporting the claims as the underlying story and potential public health consequences may be far more newsworthy than the current headlines.

Additionally, Monsanto was not directly involved with the use of pyriproxifen in Brazil. On 13 February 2015, the agribusiness corporation issued a statement:

Medical researchers were working to unravel the causes behind the increase in microcephaly births. A 10 February 2016 New England Journal of Medicine article reported that research remains ongoing:

Although the disease is self-limiting, cases of neurologic manifestations and the Guillain–Barré syndrome were described in French Polynesia and in Brazil during ZIKV epidemics.5,6 Recent reports from the Ministry of Health of Brazil suggest that cases of microcephaly have increased by a factor of approximately 20 among newborns in the northeast region of the country, which indicates a possible association between ZIKV infection in pregnancy and fetal malformations.

Although 37 infants with microcephaly were evaluated, only 35 cases are included in this report. Two infants with microcephaly were excluded from the original cohort of 37 babies: one had autosomal recessive microcephaly with sibship recurrence, and one had cytomegalovirus infection. Overall, 26 (74%) mothers of infants with microcephaly reported a rash during the first (n = 21) or second (5) trimester. Residence in or travel during pregnancy to areas where Zika virus is circulating was confirmed for all mothers, including women without a history of rash. Twenty-five (74%) infants had severe microcephaly (head circumference >3 SD below the mean for gestational age) ... All 35 infants in the cohort tested negative for syphilis, toxoplasmosis, rubella, cytomegalovirus, and herpes simplex virus infections. CSF samples from all infants enrolled in the cohort were sent to a reference laboratory in Brazil for Zika virus testing; the results are not yet available.

A 13 February 2016 statement from Brazil's Ministry of Health (translated) echoed information published in medical journals and by public health authorities:

There are no epidemiological studies showing the association between use of pyriproxifen and microcephaly. The Ministry of Health only uses larvicides recommended by the World Health Organization (WHO). Products undergo a rigorous evaluation process of the World Health Organization Pesticed Evaluation Scheme (WHOPES). The pyriproxifen is among the products approved by that committee and also is certified by ANVISA (National Health Surveillance Agency), which assesses the safety of the larvicide in Brazil.

Unlike the relationship between the Zika virus and microcephaly, which has had its confirmation attested in tests that indicated the presence of the virus in samples of blood, tissue and amniotic fluid, the association between the use of pyriproxifen and microcephaly has no scientific basis. Importantly, some localities that do not use pyriproxifen were also reported cases of microcephaly.

The Secretary of State of Rio Grande do Sul Health (SES / RS), as the local health authority, is empowered to use the product purchased and distributed the Ministry of Health or develop alternative strategies.

A global effort to determine the exact causes of the 2015-2016 increase in microcephaly cases in Brazil remained underway at the time the pyriproxifen theory was floated. No credible, mainstream experts or public health groups lent any credence to that particularly theory, and largely leaned toward a yet-undiscovered link between Zika virus and microcephaly.

Speculative reports connecting Monsanto and pyriproxifen as culprits had no basis in any accepted science or research and, at worst, served to exacerbate unfounded fears about larvicides during a mosquito-borne disease outbreak.  To date, medical research hasn't reached any firm conclusions about why a decades-old virus (Zika) potentially led to a sudden increase in microcephaly cases; however, the use of a similarly decades-old larvicide (pyriproxyfen) as the only cause was dismissed by experts across several related fields as improbable and without merit.