Did Zelenskyy 'Troll' Putin Over a Supposedly Fake Video?

Social media users pored over videos that appeared to show the Ukrainian president touching a microphone. What was it all about? 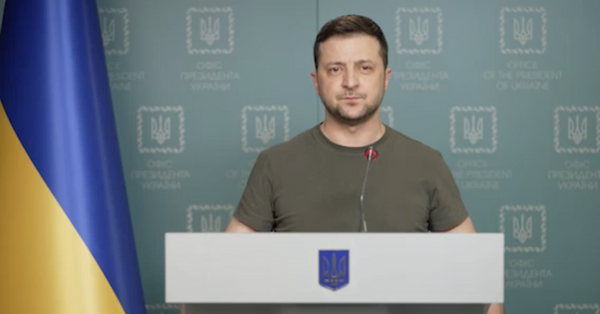 In March 2022, during Russia's invasion of Ukraine and in the context of an intense struggle to control various narratives around the conflict, internet users — primarily those sympathetic to Ukrainian President Volodymyr Zelenskyy — enthusiastically shared a remarkable claim: that Zelenskyy had "trolled" his Russian counterpart Vladimir Putin by touching a microphone during a video message.

According to proponents, that gesture was an allusion to an existing theory, which held that video footage apparently showing Putin's hand passing through a microphone was proof he was using graphic effects to pretend he was holding meetings in public.

On March 5, for example, one widely-shared tweet contained a montage of two clips: one supposedly showing Putin's hand passing through a mic, and the other showing Zelenskyy touching a similar mic and moving it to one side. The tweet explained:

Putin released a video but it was a fake that Putin made to show he isn't cowering away somewhere. Putin’s hand goes through the microphone, so Zelensky showed he’s actually real, by moving the mic. We know that the video of Putin was authentic, and not the result of graphic effects or a "green screen" — higher quality footage clearly and definitively demonstrates that his hand passed behind the mic, and not through it. This component of the theory is therefore false.

However, we have not yet been able to determine the accuracy of the key part of the theory — the claim that Zelenskyy touched a microphone as an allusion to the "Putin green screen" theory, and as a way to publicly "troll" his Russian counterpart. As a result, we are issuing a rating of "Unproven," for now. If definitive evidence becomes available, we will update this fact check accordingly.

Internet users, primarily those critical of Putin and the Russian invasion of Ukraine, enthusiastically shared the Putin "green screen" claim, beginning on March 5, in large part because it suggested he was, in fact, hiding in a secure, private location, while pretending to be out in public meeting civilians. That footage can be viewed below:

In that version of the footage, Putin's right hand appears to pass through the mic in front of him: However, this was an illusion caused by a low-quality rendering of the video, and not the result of an elaborate hoax on the part of Putin. The footage was recorded at a meeting Putin held with Russian airline staff on the afternoon of March 5, as shown in pictures taken by photographer Mikhail Klimentyev. Higher quality footage posted online by several outlets lacks such illusions, and demonstrates the footage was authentic.

For example, here's how the same moment appeared in a Daily Telegraph video of the event: And in a higher resolution video posted by Rupor Moscow: Similar high resolution videos were also posted by Russian state-owned outlets RT and Zvezda. The footage was not the result of visual effects, and the "green screen" theory was unfounded.

However, even though we know the Putin theory was unfounded, this has no relevance to whether or not Zelenskyy made a sly reference to it in a subsequent video, by touching a mic and moving it to one side. Zelenskyy could have done this because he believed the Putin green screen theory, or because he wanted to make fun of it regardless of how accurate he believed it to be.

The Zelenskyy component of the montage consists of two main parts: first, Zelenskyy stands with his hands on a podium and says "Slava Ukraini" ("Glory to Ukraine"), as he does at the end of most speeches; then Zelenskyy takes his hands off the podium, touches the mic with his right hand, and swivels it to his left:

Snopes has concluded that the first component of the clip originated in a video message which Zelenskyy's team posted online on the evening of March 5. Here is the same moment as shown in a YouTube video containing the Putin theory: And in a similar tweet posted by Lyubov Sobol, a Russian opposition political activist: Those moments are clearly identical, and that March 5 video was undoubtedly the source of the first component of the Zelenskyy "troll" clip.

However, the second component — where Zelenskyy touches and moves the mic — is not shown in the official videos posted online by Zelenskyy. This is a confounding and confusing gap in the evidence, which we have not yet been able to explain. Here is what we do know, though:

None of those videos contained a moment in which Zelenskyy's right hand touched and moved the microphone.

The latter scenario seems particularly unlikely. Based on the smooth and continuous movements shown in the "mic touch" footage, any fake would have to be exceptionally sophisticated.

We checked early archived versions of the URL associated with the YouTube and Facebook videos, but found no record of an earlier, longer official video that included the "mic touch," though we can't rule that out as a possible explanation.

We also found no positive evidence that someone with access to the raw footage of Zelenskyy's March 5 speech either leaked it to a third party, privately, or posted it themselves via an unofficial social media account, or using an alias. The earliest instance of the Putin/Zelenskyy trolling video that we could find was posted to Twitter at 10:39 p.m. Kyiv time (3:39 p.m. EST / 8:39 p.m. GMT) — just over an hour after the official Zelenskyy video message was first published, at 9:29 p.m. Kyiv time. Snopes asked the person behind that Twitter account where they had first come across the footage, but we have not yet received any response:

Ultimately, we cannot rule out the possibility that the "mic touch" footage was authentic and Zelenskyy's staff effectively smuggled it onto the internet. Indeed, if Zelenskyy's staff did leak footage that included the "mic touch" moment, that fact might remain publicly unconfirmed for some time. Another confounding consideration here: If Zelenskyy did wish to take a sly dig at Putin, why make that symbolic gesture, only to then cut it from the official video, but subsequently leak it into public view anyway, via a back channel on to the internet?

The "mic touch" footage appears to have been authentic, though we cannot definitively confirm that, and we have not yet identified how it ended up on the internet. However, if it was recorded at the same time as Zelenskyy's March 5 video message, then it might well be a sly reference to the "Putin green screen" theory from earlier that day.

Putin met with the airline staff earlier on the afternoon of March 5. References to the meeting, along with screenshots and clips, began to appear online at around 4 p.m. Ukrainian time on March 5 — more than five hours before Zelenskyy's video was posted. It should be noted that we don't know when Zelensky's video was recorded, but assuming it was shortly before it was posted, that would leave plenty of time for Zelenskyy and his staff to become aware of the rumor about Putin's hand "passing through" a microphone, and decide to make a reference to it.

This sequence of events doesn't allow us to come to a conclusion about the authenticity and motivations behind the gesture, but it is at least useful in clarifying certain possibilities. For example, if we knew with certainty that the footage of Zelenskyy was recorded before Putin had his meeting with the airline staff, then we could definitively rule out the possibility that Zelenskyy was making a satirical reference to a later conspiracy theory.

As it turns out, we don't know when the video was recorded, so all reasonable possible explanations remain on the table, and our rating remains "Unproven," for now.