No, Volodymyr Zelenskyy Did Not Wear a Nazi Symbol 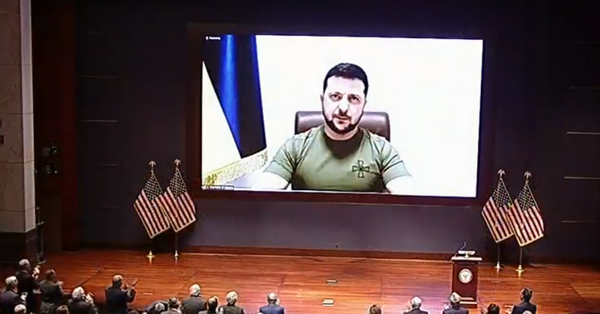 March 2022 saw the latest prominent example of a ludicrous conspiracy theory that falsely claims Ukrainian President Volodymyr Zelenskyy is a neo-Nazi, or holds views sympathetic towards Nazism. The smear against Zelenskyy — who is himself Jewish and whose great-uncles died in the Holocaust — is designed to justify Russia's invasion of Ukraine, which began in late February.

Previously, Snopes has debunked a similar false rumor about Zelenskyy, concluding that a photograph which appeared to show him holding aloft a soccer jersey emblazoned with a swastika was, in fact, the result of digital editing.

In this case, social media users pointed to a symbol visible on Zelenskyy's T-shirt during his daily video messages, claiming it was a Nazi "Iron Cross," and therefore proof of Zelenskyy's Nazism.

For example, a March 16 post on the /conspiracy section of the popular forum Reddit contained: screenshots of Zelenskyy wearing a green T-shirt emblazoned with a cruciform symbol; pictures of the Iron Cross; an excerpt from the Wikipedia entry for "Iron Cross"; and the suggestive caption "Probably just a coincidence." Some were more explicit in claiming that Zelenskyy was wearing a Nazi symbol, in a brazen demonstration of his supposed Nazism, while others rather insidiously presented their claim in the form of a question. On Facebook, the claim was shared widely, as shown in the screenshot below: In reality, of course, those claims were false. Zelenskyy did not wear a Nazi symbol, not least because he himself is not a Nazi or neo-Nazi. Rather, the cross on his T-shirt was the official emblem of Ukraine's armed forces. Given that he is, in his capacity as president, also the Supreme Commander-in-Chief of those armed forces, and those forces are currently fighting off an invasion, Zelenskyy's wearing of the symbol could hardly be less surprising, less controversial, or less in need of elaborate explanation. Our rating is "False."

The emblem of Ukraine's Armed Forces was officially adopted by a presidential decree in September 2009. It consists of the tryzub — the blue and gold trident of Vladimir the Great, a medieval Ukrainian leader — placed at the center of a red cross pattée: Zelensky often wears attire emblazoned with a modified version of that emblem, without the original color palette. For example, here it is on his T-shirt in a March 6 video: The cross pattée is a type of cross whose legs are narrower at the center and widen at their ends. It has been a nearly ubiquitous feature of European heraldry and symbolism for nearly 1,000 years, featuring in countless flags, coats of arms, and emblems, in a variety of historical, geographic, and political contexts.

For example, the cross pattée is a key component of the Victoria Cross — the most prestigious royal honor available to members of the British Armed Forces:

Victoria Cross, The Victoria Cross Is The Highest Military Decoration Awarded For Valour To Members Of The Armed Forces Of Various Commonwealth Countries, And Previous British Empire Territories. (Photo By Encyclopaedia Britannica/UIG Via Getty Images)

Similarly, the cross pattée features prominently: on the flag of the country of Georgia; the U.S. Armed Forces Distinguished Flying Cross; flags used by the Knights Templar; the coat of arms of Durham University in England; and the crest of Toulouse F.C., a French soccer club, among many others.

In Russia, the cross pattée forms an important part of the medals awarded to those inducted into the Order of St. George, the highest Russian military honor available. The order, including descriptions of the cross pattée to be used in associated medals and ribbons, was reestablished in August 2000 under a decree signed by President Vladimir Putin.

In the late 19th century and during World War I, the cross pattée was a key component of the Iron Cross — a military medal awarded in the German Empire. In World War II, Adolf Hitler reintroduced the Iron Cross, and it has since taken on an association with Nazism.

It's important to note here that even in the rather narrow historical context of German military insignia, the cross pattée is not originally or uniquely Nazi; but because of its use in World War II, the Iron Cross has become one of several Third Reich symbols favored by 21st-century white supremacists and white nationalists in the United States. However, the Anti-Defamation League notes on its website:

"...An Iron Cross in isolation (i.e., without a superimposed swastika or without other accompanying hate symbols) cannot be determined to be a hate symbol. Care must therefore be used to correctly interpret this symbol in whatever context in which it may be found."

Some key facts, in conclusion: The emblem of Ukraine's armed forces is not an Iron Cross. Both contain the cross patée, but the Ukrainian emblem has a second component, which is lacking in the Iron Cross — the trident of Vladimir the Great.

Therefore, claims that Zelenskyy was furtively showing off his supposed Nazism by wearing an Iron Cross were: factually inaccurate (it's not actually an Iron Cross); incoherent (by the same logic, Durham University is a bastion of Nazism, and anyone awarded the Victoria Cross is a Nazi of the highest order); and execrable (Zelenskyy is Jewish and has family members who were slaughtered in the Holocaust).