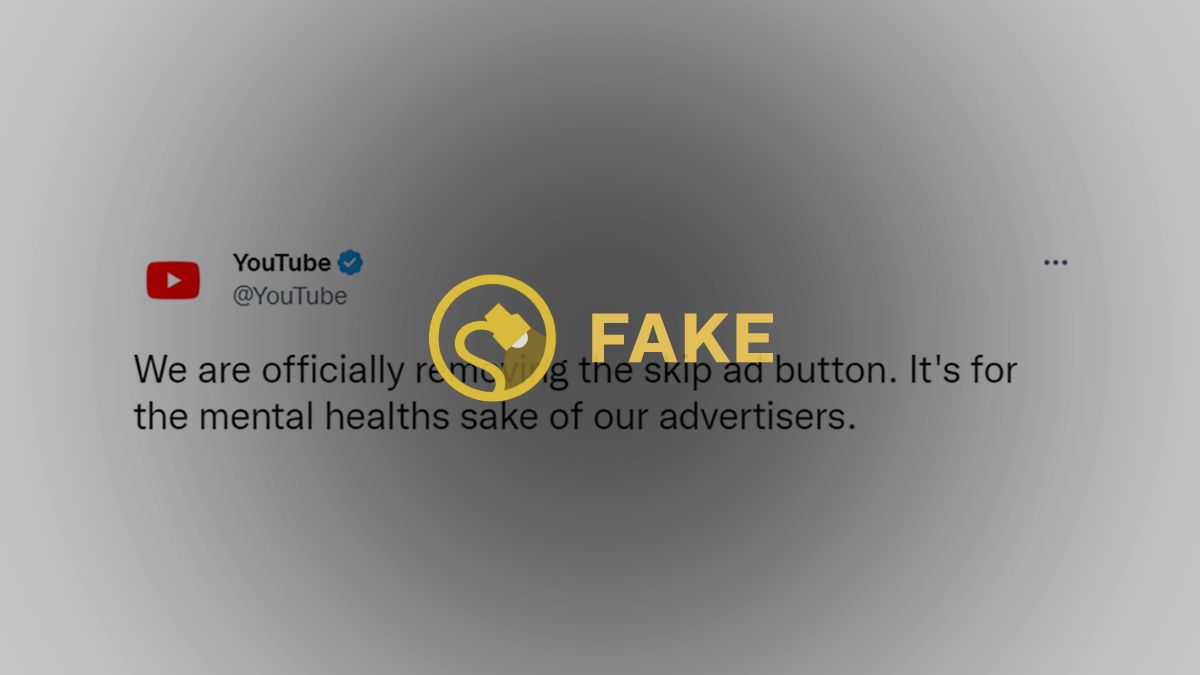 YouTube did not say we are officially removing the skip ad button nor did they say it's for the mental healths sake of our advertisers. (Image Via Reddit)

On Oct. 27, 2022, a Reddit user posted a screenshot on the r/memes subreddit that showed a fake tweet from YouTube's official Twitter account, which read, "We are officially removing the skip ad button. It's for the mental healths sake of our advertisers." To be clear, YouTube never tweeted this.

The fake tweet referenced the button that is sometimes displayed on YouTube that allows users to skip the platform's ads that can appear before, during, and after videos.

The title of the Reddit post was "13/6/2024." This indicated that it was somewhat of a joke prediction of something that might happen in the future. The message appeared to claim that the ability to skip ads would be removed by YouTube around June 13, 2024.

Fake tweet screenshots that are meant as jokes can sometimes receive shares outside of their original context, so that's one reason why we're publishing this fact check.

One Reddit user asked in a comment, "Is this real?" The user who created the post responded, "No, I made it up because spreading misinformation is fun." Another person chimed in and said, "Thought this was real for a hot second and was mortified." We noticed others saying that they wouldn't be surprised if something like this happened in the future, with one person commenting, "What's scary about this is that it is entirely possible."

The Reddit post was locked by moderators of r/memes for violating a rule. It received nearly 20,000 points. For any readers who aren't familiar with how Reddit works, that number of points meant that it was a fairly popular post.

It's certainly possible that YouTube might announce its completely removing the "skip ad" button or making other changes to the way people can interact with ads in the future. However, for now, users can rest easy, as this was nothing more than a fake tweet.