Is This a Young Woman with President Bill Clinton on Jeffrey Epstein's Plane?

The answer to who she really is ... is simpler than some think. 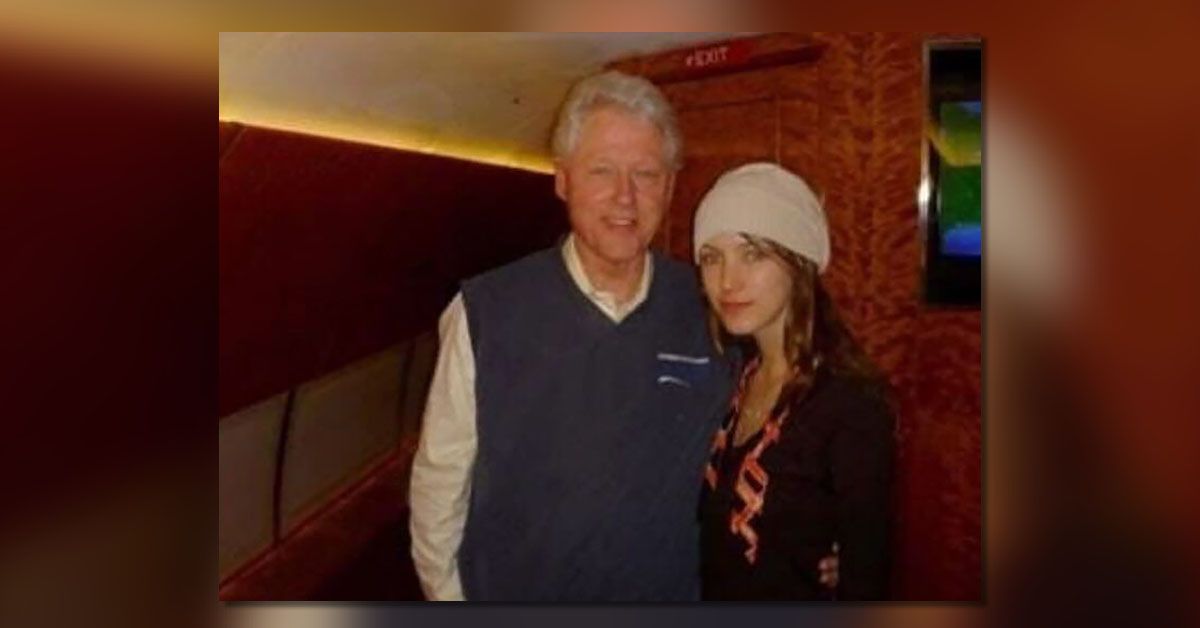 Who is the woman in a viral photo with former President Bill Clinton? She's a photographer and co-founder of a New York-based modeling agency. But if you pose that question to adherents of a Qanon conspiracy theory, you'll probably get a different answer: She's an associate of convicted sex offender Jeffrey Epstein and recruits children to come to the billionaire's island.

So how did this ordinary citizen get mixed up in the world of Q? It started with a single miscaptioned photograph that supposedly showed her on Epstein's private plane with Clinton: While this appears to be a genuine, unaltered photograph, the conspiracy theorists spreading it get several things wrong about what it shows. Mainly, the photograph wasn't taken on a plane owned by Epstein, who was charged with new sex crimes related to child-sex-trafficking for prostitution in the summer of 2019.

Before we go any further, we should note that the Q conspiracy theory is built on speculation and wild assumptions. The woman has not been implicated in any legal proceedings related to Epstein, and she has not been charged with any crimes herself (Snopes is not identifying her to protect her privacy).

Indeed, Miami Herald reporter Julie Brown, who was fundamental in uncovering Epstein's alleged sex-trafficking crimes, told us that she never come across the woman's name during her investigation into Epstein: "I have never run across her name anywhere — and I checked with two people involved in the case for 12 years and they never heard of her. They suspect it’s BS internet conspiracy shit."

We also dug through dozens of Q posts, conspiracy primers, Qanon explainers, and 4chan and 8chan threads attempting to connect her to Clinton and Epstein, but we've yet to see any concrete evidence. Instead, we found invented explanations for out-of-context pictures and illogical leaps of faith being accepted as fact.

The above-displayed picture has been online since 2006. It was originally shared with a caption saying it showed Clinton with a 19-year-old college student aboard billionaire venture capitalist Ron Burkle's private plane. It wasn't until several years later (circa 2017) that the "Pizzagate" conspiracy community picked up this picture and started claiming that it showed a woman with Clinton aboard Epstein's plane (popularly dubbed the "Lolita Express"). The fact that this photograph was circulating for more than a decade before it became attached to claims relating to Epstein should immediately raise red flags.

While we may be entering dot-connecting territory here, the design on the wall behind Clinton bears a resemblance to a photograph from Business Insider supposedly showing the interior of Canadian businessman Frank Giustra's plane. Giustra and Clinton, like Burkle and Clinton, were frequent travel partners:

Angel Urena, Clinton's spokesperson, also denied that the viral image was taken aboard Epstein's plane: "This photograph was not taken on Epstein’s airplane."

In addition to misidentifying the location of this photograph, Qanon believers also frequently share this photograph with the claim that the woman was underage at the time the photograph was taken. Again, this is based on pure speculation: When Gawker first shared this photograph in 2006, the organization claimed it showed a "19-year-old college student." This appears to be accurate. In 2009, The Cut identified the woman as a "22-year-old" in an article about her photography. This would make her approximately 19 in 2006 when the photograph was allegedly snapped.

Clinton did fly on Epstein's plane a number of times. However, the above-displayed photograph does not document one of these trips. This photograph shows Clinton with a young woman aboard a plane more likely owned by either Burkle or Giustra.

While the question of who she is may send conspiracy theorists down a rabbit hole of assumptions and speculation, the real answer is quite simple: She is a photographer and co-founder of New York-based modeling agency who was needlessly thrown into this world of conspiracy because she once appeared in a photograph on a plane with Clinton.