A meme falsely claimed the Looney Tunes character Yosemite Sam had been banned from television due to his use of guns and violence. 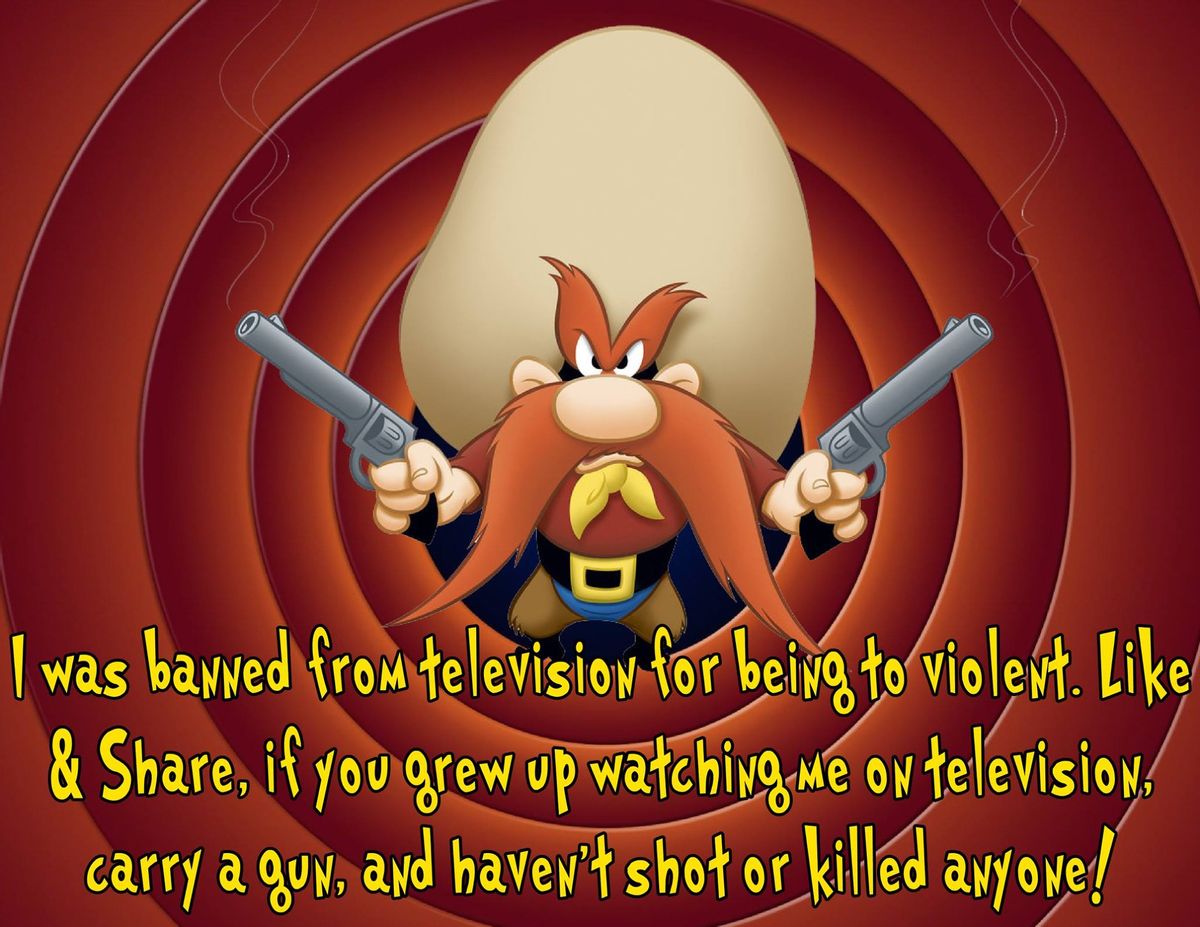 Claim:
Yosemite Sam has been banned from television because his use of guns is offensive and a poor influence on children.
Rating:

On 26 May 2016 the Facebook page "Politically Incorrect America" shared the self-created meme displayed above, holding that the popular Looney Tunes character Yosemite Sam, whose most prominent characteristic is his aggressive gunslinging,
had been banned from television for being too violent:

A large number of commenters expressed skepticism about the meme's claim, and when attempted to turn up even a single anecdotal report of Yosemite Sam;s having been banned from the airwaves, we came up short. If such a ban has ever been in place, no trace of it exists in any news archive we could locate.

By way of contrast, articles from 1999 through 2002 reported the temporary disappearance of fellow Looney Tunes character Speedy Gonzales. On 28 March 2002, Fox News reported that a fan-led campaign sought to return the popular character to television after he was retired in 1999 (reportedly for being an "offensive ethnic stereotype of Mexicans"):

The rapid rodent has been deemed an offensive ethnic stereotype of Mexicans, and has been off the air since the cable network became the sole U.S. broadcaster of old Warner Brothers cartoons in late 1999.

But that has animated fans of the spunky character who want Speedy cartoon shorts — and the famous "Arriba! Arriba! Arriba!" cry — back on the airwaves.

Hundreds of fans have engaged in an e-mail campaign to resurrect Speedy, gathering on animation-fan Web sites to debate and organize, according to Virginia Cueto, an associate editor at HispanicOnline who wrote an article about the cartoon controversy.

"Speedy Gonzales has always been a very popular cartoon character, and cartoon fans are among the most diehard loyal fans around. They just want him back," she said in a telephone interview from Miami. "And these aren't just non-Mexicans; a lot of these are Mexicans themselves."

Within months, the campaign achieved its goal, with a June 2002 article reporting that Speedy would be returning to television due to popular demand: In June 2014 a Slate writer contrasted concerns about video game violence with the content of vintage Looney Tunes segments but at no point suggested such cartoons be banned from the airwaves:

When California tried to ban the sale of violent video games to minors, the Supreme Court mocked its efforts, noting that old Looney Tunes cartoons provoked the same tendency toward violence in children as a Grand Theft Auto–style bloodbath. But just how violent were Looney Tunes? A video compiled by Sam Henderson reminds us that the antics of Bugs Bunny and co. were a lot more brutal than you remember:

But no kids’ show today would ever treat firearms or gun deaths so lightly, with such zany exuberance, as Looney Tunes once did. That jaunty disregard of the consequences of violence is part of what made the show so bizarrely delightful.

Changing mores with respect to Looney Tunes and its target audience (children) isn't a complete non-issue, however. Warner Bros. has restricted the airing of a handful of Looney Tunes segments and gags due to content now considered inappropriate for television. Re-releases of the cartoons on DVD have been appended with a disclaimer voiced by actor Whoopi Goldberg noting that some content may be inappropriate, but its preservation is important:

The cartoons you are about to see are products of their time. They may depict some of the ethnic and racial prejudices that were commonplace in the U.S society. These depictions were wrong then and they are wrong today. While the following does not represent the Warner Bros. view of today's society, these cartoons are being presented as they were originally created, because to do otherwise would be the same as claiming that these prejudices never existed.

Ten Merry Melodies and one Looney Tunes cartoon were withdrawn from syndication in 1968 (not 2016), but the decision had nothing to do with guns, violence, or Yosemite Sam. The single Looney Tunes segment affected was a 1944 short titled "Angel Puss," which prominently featured a young boy in blackface. The "Censored Eleven" had been absent from circulation or syndication for nearly 50 years at the time the Yosemite Sam meme appeared in 2016.

Ascertaining whether Yosemite Sam's Looney Tunes appearances were banned from the airwaves was not all that difficult, as vintage cartoon channel Boomerang maintains a web-available schedule of such airings. On 4 June 2016 an episode of Looney Tunes included at least one Yosemite Sam segment, "Buccaneer Bunny":

The age and cultural significance of Looney Tunes cartoons make it easy to search by segment title and determine that not only has Yosemite Sam not been banned from TV, but he is actively appearing on Boomerang. As such, there is no truth to the claim that the character has been removed from the airwaves, and the rumor that he had was another example of completely fabricated instances of political correctness run amok.