John Lennon, Yoko Ono, and Chuck Berry all appeared on "The Mike Douglas Show" in 1972. 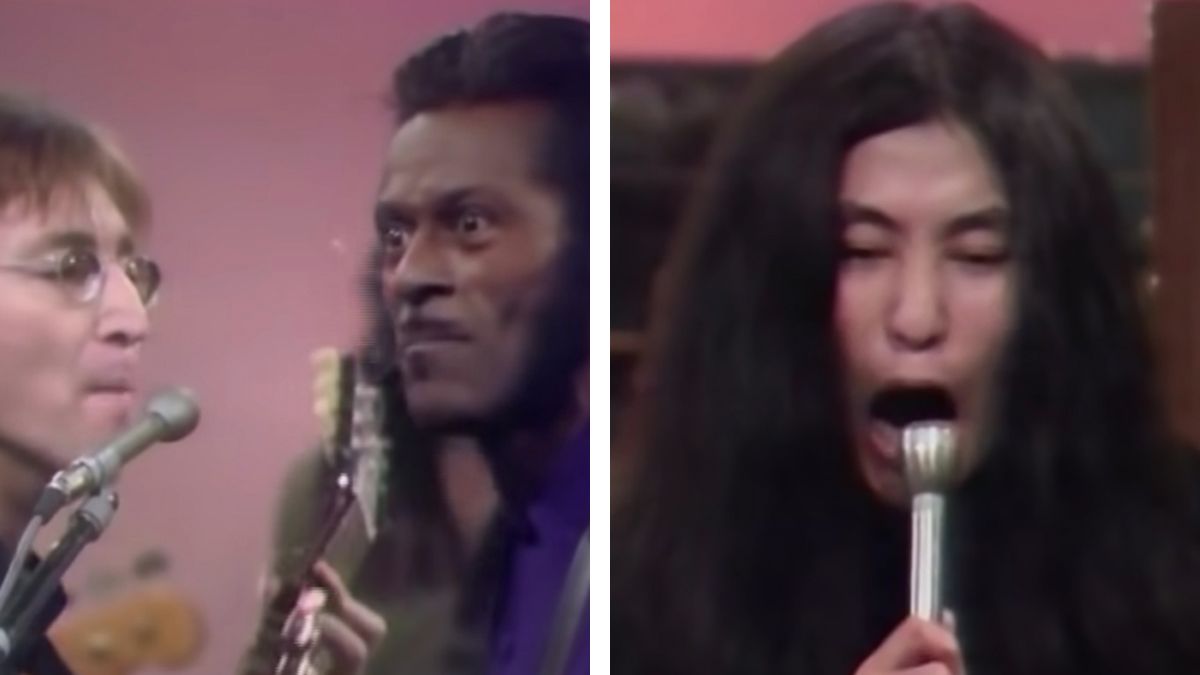 Claim:
A meme shows the moment that John Lennon and Chuck Berry reacted to Yoko Ono "screeching into the microphone" during a 1972 appearance on "The Mike Douglas Show."
Rating:

On Jan. 14, 2023, the Rock Reflections Facebook page posted a meme that showed a still frame from a video with the caption, "The very moment when Yoko Ono starts screeching into the microphone while John Lennon and Chuck Berry are performing on 'The Mike Douglas Show' in 1972."

Rock Reflections also added their own caption above the meme, which read, "While Chuck may have that 'What the…..?' stare, it looks like John has that 'Oh crap, I forgot to tell him my wife was here' look on his face."

Was the still frame with Berry's wide-eyed reaction actually from a different part of the song? Was this meme in any way misleading?

A check of the video showed that this meme was indeed a faithful representation of the moment.

Beginning at the 16:05 mark below, readers can see that Berry's eyes go wide upon the first sounds that Ono made, while the band plays his hit, "Memphis, Tennessee." Lennon appeared to slightly react as well, looking slightly to Ono's direction, but not with quite the facial expression shown by Berry.

At the 17:06 and 18:05 marks in the video, Ono can once again be seen singing into the microphone. However, she isn't audible for at least part of those two subsequent moments, but can barely be heard just as the song finishes.

One YouTube user commented, "Respect to the person who switched Yoko's mic off. They should be found and put in the Rock & Roll Hall of Fame." It's unclear if the microphone was truly switched off. Nevertheless, Ono could not be heard, at least not loudly, after the first bout of "screeching."

On the same subject, stand-up comedian Bill Burr once joked about the moment on his podcast, "Monday Morning Podcast." A YouTube user edited together the audio from Burr's podcast with footage from the 1972 appearance on "The Mike Douglas Show."

Rock Reflections. "While Chuck May Have That 'What The…..?' Stare - It Looks like John Has That 'Oh Crap, I Forgot to Tell Him My Wife Was Here' Look on His Face." Facebook, 14 Jan. 2023, https://www.facebook.com/RockReflections/posts/pfbid0LcBTTvy6RdLzBQQvRjhUzHwmWMJCC2xqGgCw62N5M8da9zi7n86mWszZSPp2XAH6l.