Was Ye Actually Suspended from Twitter for Posting Unflattering Pic of Musk?

The rapper formerly known as Kanye West was suspended, again, from Twitter in early December 2022. 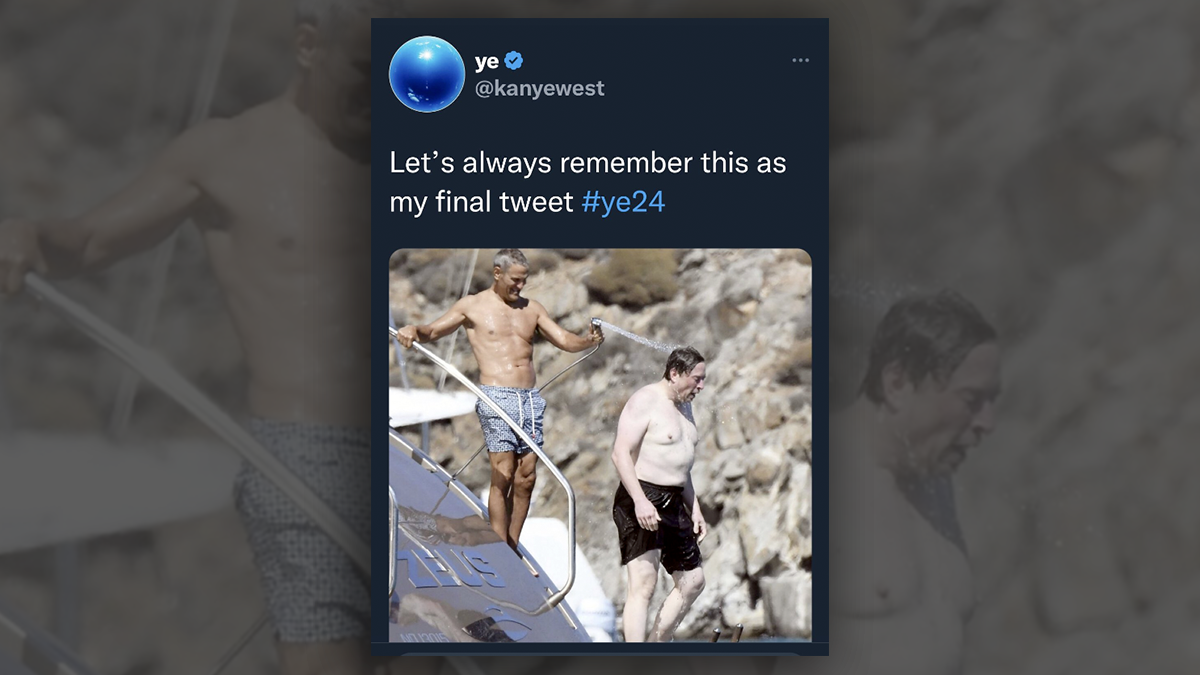 The Twitter account belonging to Ye, the rapper formerly known as Kanye West, was suspended for a second time on Dec. 1, 2022, after he posted an image that appeared to show a swastika intertwined with the Star of David. That tweet was later deleted.

After the tweet was deleted, but prior to being fully suspended from Twitter, Ye also tweeted what was described as an "unflattering" photo of Twitter owner and CEO Elon Musk being hosed down by American businessman Ari Emmanuel on a private yacht. "Let's always remember this as my final tweet," Ye wrote: 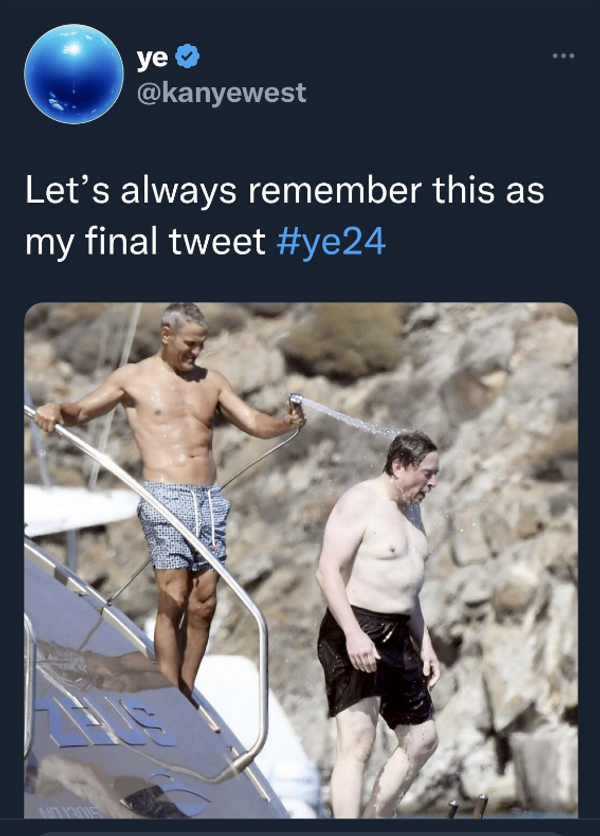 Twitter users and some media reports suggested that Ye's suspension occurred not due to the anti-Semitic content of the apparent swastika tweet, but as the result of his choice to tweet an unflattering image of a man with the unilateral power to ban or restore Twitter users.

Musk, for his part, denied that the photo motivated the ban, explaining instead that  Ye's account violated Twitter's rules against inciting violence:

Longstanding Twitter policies prohibit "glorifying, praising, condoning, or celebrating [...] violent events that targeted protected groups'' — a category which explicitly includes the Holocaust. Musk, however, has been criticized for unevenly, unpredictably, and unilaterally enforcing Twitter's policy against hate speech in general, and with respect to anti-Semitism specifically.

Early attempts by some Twitter users to report Ye's swastika symbol for hate speech, for example, apparently resulted in the platform initially finding no violations, lending support to Musk's own assertion that he, personally, was the one who ultimately suspended Ye.

On the same day Musk ostensibly took action against a user for inciting anti-Semitic violence, as one example, Twitter removed a nearly decade-long suspension on the Twitter account of infamous neo-Nazi Andrew Anglin, founder of the White Nationalist publication The Daily Stormer.

A complicating factor in all this is the observation made by some users that the swastika-containing graphic in Ye's tweet was actually a symbol associated with the UFO-based religious group known as the International Raëlian Movement.

It is factual that Ye was suspended, officially, for incitement to violence. It is also clear that Musk made this decision unilaterally, following the posting of an unflattering image of him, and also following Ye's sharing of alleged private correspondence between himself and Musk.

Because we lack the visibility into Musk's brain required to confidently rate this claim true or false, we are leaving it unrated at this time.