Yale Cancels Midterms After Students Were Upset by Trump's Win

Rumors claimed classes and exams were canceled at Yale due to student distress over Donald Trump's win, but the underlying facts didn't appear so polarized. 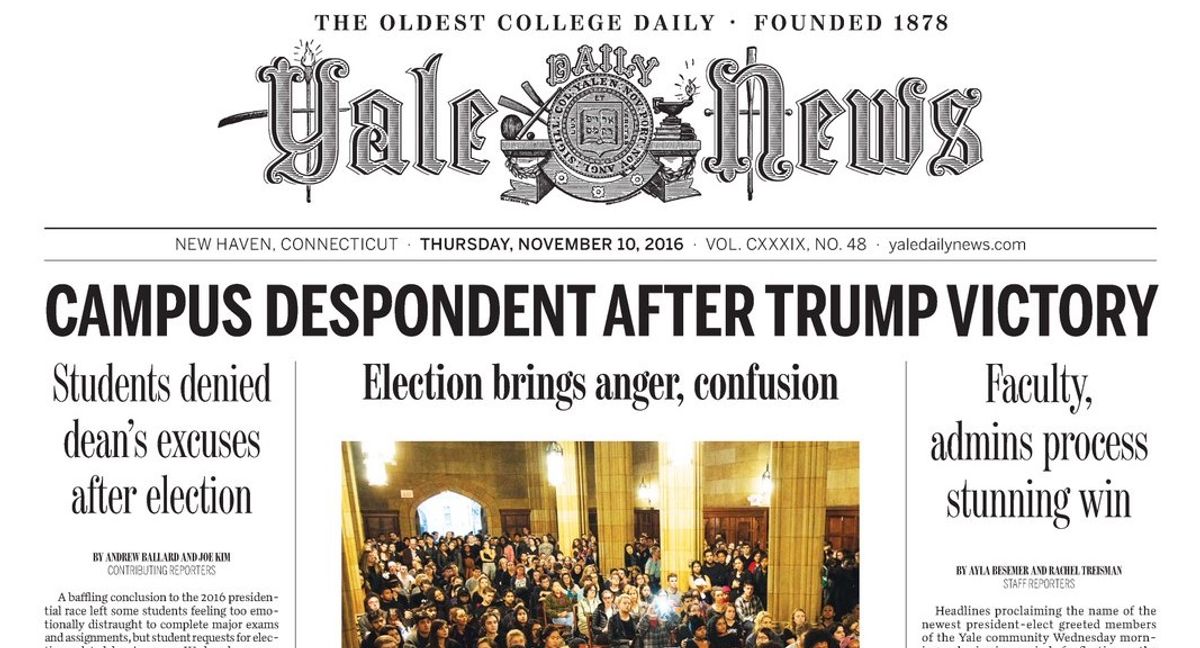 Claim:
Midterm exams at Yale were canceled because students were too upset by Donald Trump's election.
Rating:

Some academic obligations at Yale were shuffled due to the hectic events surrounding the 2016 election.

Students neither requested nor received accommodations in the cited classes because they were "upset by Donald Trump," the affected students were supporters of both candidates, and most students adhered to the pre-election exam schedule without requesting any changes.

After the 8 November 2016 U.S. general election, a number of web sites reported that Yale University "coddled" students by canceling exams or classes, apparently because of their distress over the election of Donald Trump:

Liberal students across the nation watched in shock as Donald Trump clinched victory from Hillary Clinton to become the 45th president of the United States.

But some wiped their tears, and pulled themselves together enough to ask their professors to cancel their exams because they were so upset by the results.

And one Yale economics professor heard the cry, and decided to protect his snowflake charges by making the test optional ... It isn’t clear who the professor was[.]

John Victor, editor of the Yale News, published the extraordinary message, and noted that many more snowflake students were demanding similar treatment[.]

The claim was aggregated by Fox News, but as the material quoted here noted, the anecdote appeared to come from one single source on Twitter:

A second tweet claimed a separate "midterm" had been significantly modified to accommodate student distress:

Most accounts of the purported handwringing at Yale could be traced back to Victor's 9 November 2016 tweet, and as mentioned in the piece, the professor's name was not included in any accounts (making them initially impossible to locate, and the claim thus difficult to verify).

@YaleDailyNews tweeted a front page indicating that the campus was "despondent" after Trump's win, but an accompanying headline indicated that students were "denied dean's excuses [from academic obligations]" related to the election:

A baffling conclusion to the 2016 presidential race left some students feeling too emotionally distraught to complete major exams and assignments, but student requests for election-related dean’s excuses Wednesday morning were rejected. And while some professors relaxed the workload this week, students expressed frustration with the lack of leniency from other faculty following the upset — and upsetting — election.

The same article provided a name for the economics professor (Steven Berry), and added further detail:

In another academic response to the election, Physics 180 cancelled the class’s second midterm scheduled for Thursday, instead assign[ed] an identical take-home exam due Friday. In a 6 p.m. notification to students Wednesday, the physics professors said that “a timed midterm would not reflect the hard work we’ve seen all of you put into preparing for this [exam].” A similar scenario played out in an Economics 115 section taught by economics professor Steven Berry, which also had a midterm scheduled for Wednesday. Students in the class, however, got an email at around 12:30 a.m. Wednesday morning notifying them that the exam would be made optional.

As this far more detailed account noted, one examination was converted to a take-home version, and a second exam was deemed optional — both normal amendments to any syllabus. On 10 November 2016, Jon Victor tweeted that other requests for extensions by students had been denied:

Yale students asking for extensions on assignments due to election results have their requests denied: https://t.co/eSXQjaKfDi — Jon Victor (@jon_victor_) November 10, 2016

A report from a Yale-based crowdsourced publication (The Tab) critical of the rumors noted that students were not relieved from academic obligations:

The email explained that postponing the exam causes too much complication, and is simply not an option. Rather, a final curve score will be calculated for each student, based on whether or not they attended the exam.

Official schedules for Yale academics suggested that midterms were mostly held in late October 2016, not early November 2016. As is often the case with claims of collegiate fragility, the underlying details appeared to diverge dramatically from a simple claim of coddled students unable to cope with real-life events, with little background information painting a complete picture.

We have both contacted Yale's public relations department and Steven Berry for clarification, and on 11 November 2016 received a response from an individual party to the disruptions. The source confirmed there was little truth to the rumors about cancellations, describing the concerns as largely "pedagogical":

As far as I can tell, most of the student concern about Wednesday (day after the election) exams was that the drama of the election night had led [many] to stay up very late, get very little sleep and very little studying done. This applied to both Trump and Clinton supporters; both groups [inquired about sitting for exams in a] less exhausted state. A very few students were facing a more serious issue, as they are from immigrant families with members who, they suddenly believed, rightly or wrongly, might face deportation.

Adding that "[s]ome faculty made accommodations to 9 November 2016] tests (but "most did not"), the source continued:

None of the Wednesday exam accommodations were offered only to students "upset by Trump," they also applied to happy but exhausted Trump supporters, or to anyone else for that matter ... In any case, [most] students took the exam yesterday at the regular time ... almost all students were functioning just fine on Wednesday, even if tired ... To my knowledge, no Yale faculty member offered on-going extensions or relief from work ... no student was freed from learning any material, as the final exam is comprehensive, long, and difficult. I would invite any critics of "snowflake students" to pass it!

[Faculty] teaching social science courses [] want students to observe the election and think hard about [implications to relevant coursework], which probably [engendered] sympathy for those students transfixed by the late-night results. There is an article in the Harvard Crimson that quotes [a Yale professor], emphasizing his sympathy for exhausted students.

Finally, the source stated that in hindsight, the distraction presented by the election in general was suboptimal with respect to exam timing. However, that individual confirmed that student exhaustion from staying up late to follow close election results (not being "upset by Trump") was largely the cause of modification to coursework, and that the students affected by the phenomenon include both Trump supporters and opponents. Moreover, faculty expressed that the events were ones considered relevant and supplementary with respect to the courses in question, and professors wished to allow for students to fully process the policy detail and political significance (not emotions) of that notable event.