Does the World Economic Forum Have Its Own Police Force?

Photos of police badges with a WEF logo have made the rounds online. 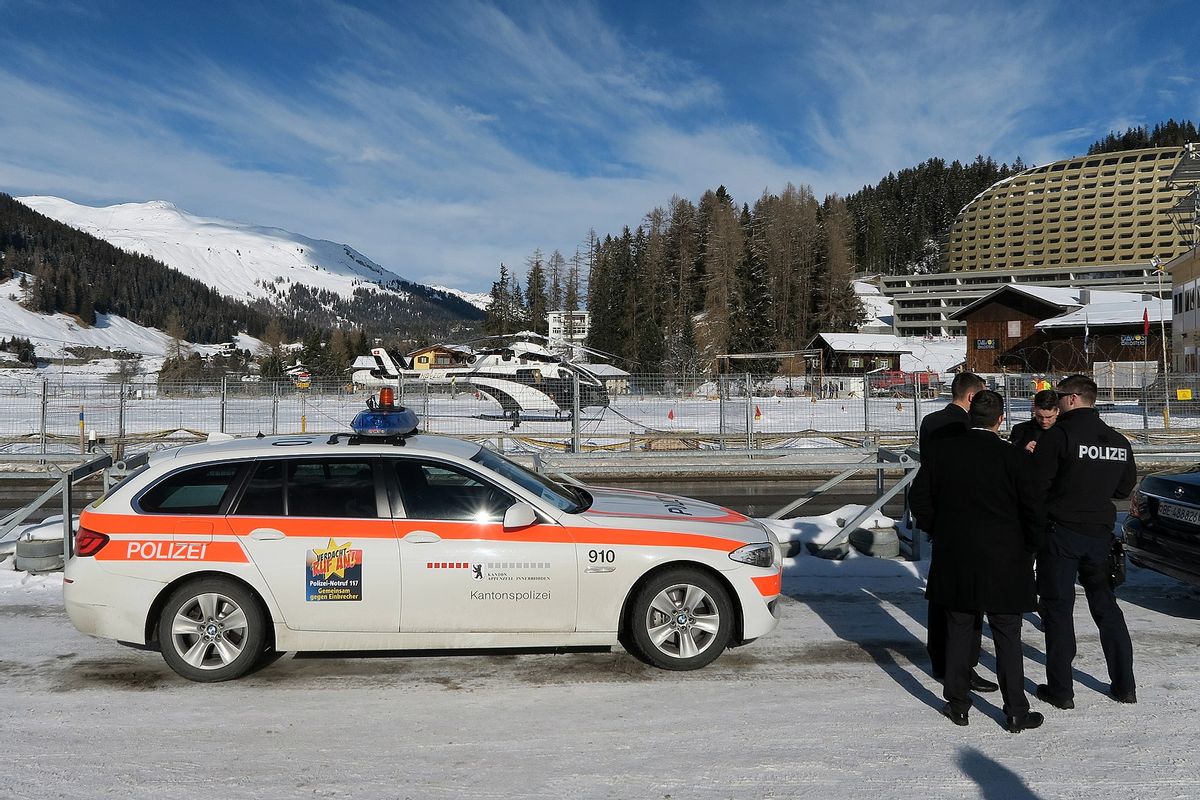 Claim:
The World Economic Forum organization has its own dedicated police force or paramilitary.
Rating:

The World Economic Forum (WEF) is known for its annual meeting in Davos, Switzerland, where wealthy and influential power brokers gather to discuss the state of the world, but an online rumor claims this organization has even more sinister influence than most people know. Photographs of a badge purportedly worn by members of a police force that is dedicated solely to the WEF have gone viral since a WEF gathering took place in late May 2022.

While these badges are connected to the WEF, there is no dedicated police force for the organization.

Tweets and Instagram posts included close-ups of Swiss police officers' sleeves bearing a "World Economic Forum" badge, claiming these officers belong to a "paramilitary" or police force that is run by the WEF:

Even U.S. Rep. Marjorie Taylor Greene, R-Ga., claimed that the WEF had their own police while accusing them of intimidating and detaining Jack Posobiec, an alt-right conspiracy theorist (the Swiss police denied detaining Posobiec).

The badge is visible on the left arm of officers in this clip tweeted by Posobiec, at the 6 second and 15 second mark:

A spokesperson for the police in Graubunden canton, where Davos is located, denied to Reuters that the WEF had its own police force. A special WEF police badge is designed by the region’s emergency services every year for the event, according to the statement.

“This serves the team spirit for use around the annual meeting,” the spokesperson said. “The WEF organization does not have a police force.”

Right above the WEF patch on the arm, viewers can see another patch representing the Graubunden security service.

The Swiss government has a detailed account of how security is managed at the WEF 2022, and while this states they have a "dedicated police force," they are referring to the police of Graubunden:

A number of agencies from the Confederation, the canton and the commune of Davos work together with the World Economic Forum. Responsibility for coordination rests with the WEF committee of the Graubünden government (www.wef.gr.ch), which is chaired by Marcus Caduff, president of the Cantonal Council. The Graubünden cantonal police and its partners ensure the security of visitors to the WEF Annual Meeting, the local population and guests.

The World Economic Forum organization has its own dedicated police force. During WEF Annual Meetings, the Cantonal Police of Graubünden are responsible for planning that takes account of security threats which would have an impact beyond cantonal borders. This will also be the case during the 2022 Annual Meeting.

We also reached out to the WEF, and will update this post when we get more information.

According to Reuters, past badges worn by police officers at Davos during the WEF can be seen here.

“Fact Check-The World Economic Forum Does Not Have a Police Force.” Reuters, 24 May 2022. www.reuters.com, https://www.reuters.com/article/factcheck-switzerland-wef-idUSL2N2XG1UZ. Accessed 31 May 2022.

"No, Jack Posobiec Was Not Arrested or Detained in Davos.” Politifact, 25 May 2022, https://www.politifact.com/factchecks/2022/may/25/donald-trump-jr/jack-posobiec-was-not-arrested-or-detained-davos/. Accessed 31 May 2022.