'Life Is Hard; It's Even Harder When You're Stupid'

Was it actor John Wayne or one of the characters he portrayed who said this? 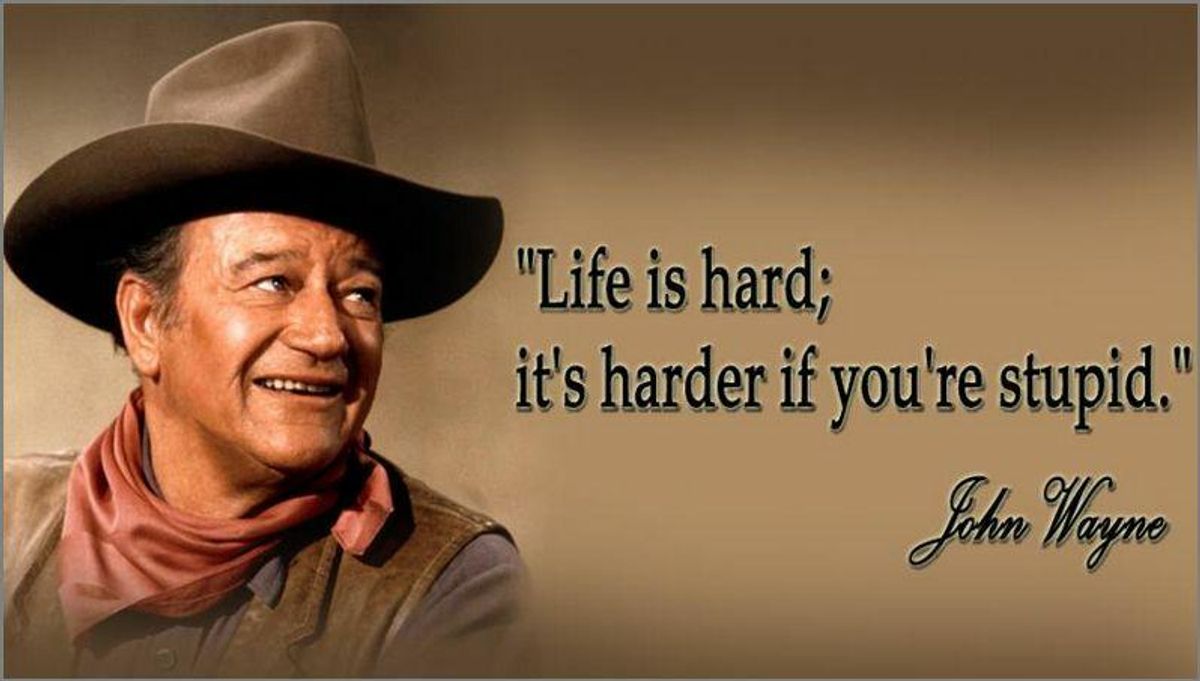 Claim:
John Wayne (or one of the characters he portrayed) said, "Life is hard; it's even harder when you're stupid."
Rating:

This line has been claimed of various characters played by Wayne in a number of movies, most commonly the 1949 release Sands of Iwo Jima, in which Wayne portrayed the battle-hardened Marine sergeant John M. Stryker — the IMDb even listed this saying as one of the film's memorable quotes. But no character in Sands of Iwo Jima, Sgt. Stryker or otherwise, speaks such a line. And no one has yet turned up a film clip or script documenting the phrase as something spoken by a Wayne character in any other movie.

So where did the phrase come from? Is it yet another great saying thought up by that witty sage, Anonymous?

The earliest known cinematic use of this thought (whatever its precise expression) appears in the 1973 crime film The Friends of Eddie Coyle, which was in turn based on the 1970 novel of the same name by George V. Higgins. The book's title character is an aging small-time criminal and informant who works as a gun runner in Boston's Irish-American underworld, but it is another character, the young gun runner Jackie Brown, who ends up saying, "This life's hard, but it's harder if you're stupid." That line comes through almost intact in the film version, rendered by actor Steven Keats (playing Jackie Brown) as "This life's hard, man, but it's harder if you're stupid":

The movie was promoted in print ads using a tag line of "Life is tough, but it's tougher when you're stupid," which likely accounts for the variations in the saying's renderings. (Even people who correctly identify the source of this quote often mistakenly attribute it to the character portrayed in the movie version by actor Robert Mitchum, Eddie 'Fingers' Coyle.)

It has also been claimed that John Wayne said this line during a 1966 guest appearance on The Dean Martin Show, in the context of his passing along wisdom to the younger generation. Wayne did participate in a segment for that show in which he discussed his thoughts about what he wanted for his then-infant daughter Marisa, but a clip of that segment (no longer available online) does not record him speaking the line in question.