Did Woodstock Occur During a Pandemic as Lethal as COVID-19? 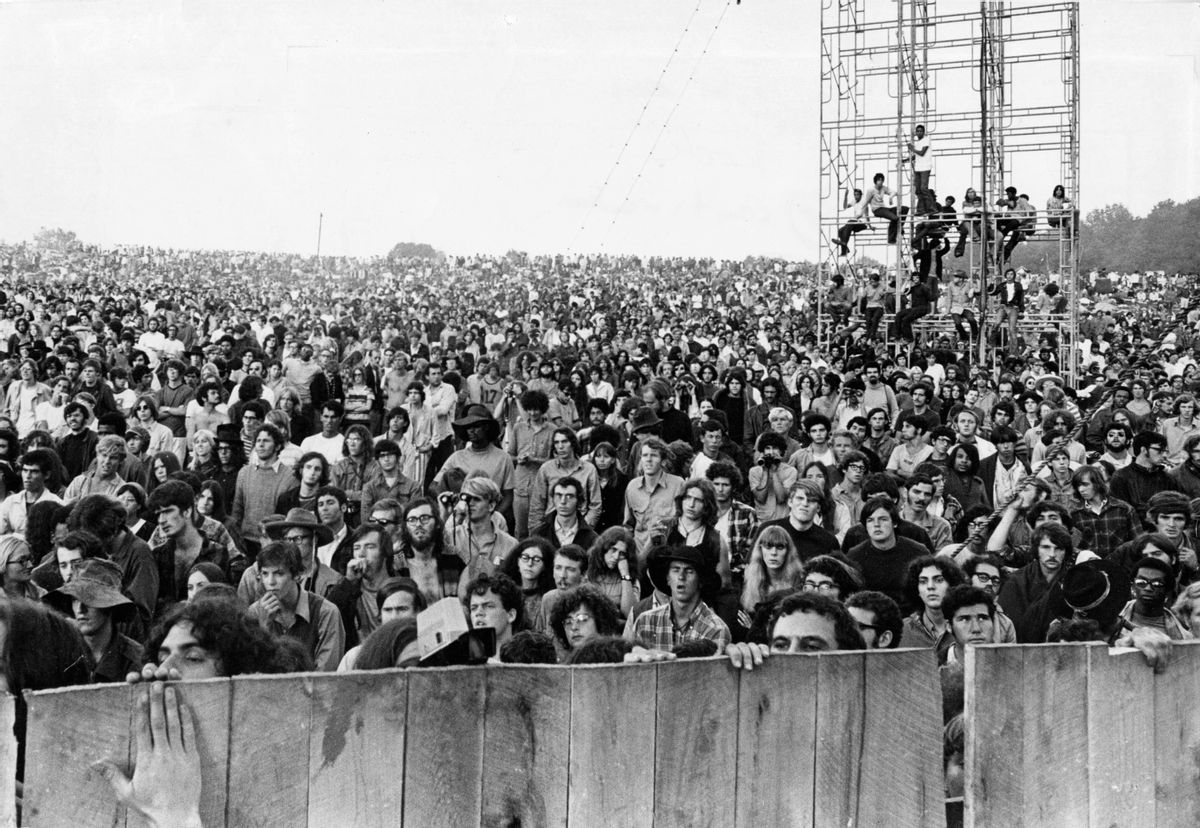 Claim:
The 1969 Woodstock music festival occurred during a pandemic as lethal as COVID-19.
Rating:

The Woodstock music festival took place in August 1969. The H3N2 influenza pandemic lasted between the winter of 1968 and the early months of 1970.

The 1968 pandemic does not compare to the COVID-19 pandemic in terms of lethality. Also, Woodstock did not take place during one of the Pandemic's seasonal peaks, but in the summer of 1969 when there was practically no reported H3N2 flu activity in the United States.

In the winter of 1968, the H3N2 virus, also referred to as the "Hong Kong flu," spread widely in the United States. Over the next 18 months, the pandemic killed an estimated 100,000 people in the U.S. and 1 million worldwide, yet daily life, more or less, proceeded as if it were business as usual. There were no statewide lockdowns or mandatory mask requirements, and large public events, such as the Woodstock music festival, took place as scheduled.

That's the thrust of an article published by the American Institute for Economic Research (AIER) on May 1, 2020, under the headline "Woodstock Occurred in the Middle of a Pandemic." Although the headline of this article is factually accurate (Woodstock took place in August 1969), the argument that government officials should be approaching all future pandemics the same way they did during the 1960s is flawed for several reasons.

Let's start with the basics.

Not All Pandemics Are Created Equal

The world has seen a number of plagues and pandemics in its history, from the bubonic plague in the 1300s, which killed an estimated 200 million people, to smallpox, which killed an estimated 300 million people throughout the 20th century. Although these diseases may all have the same end result (sickness and death), they also vary in variety of ways, such as their lethality and incubation periods.

Medicine, too, improves, and some diseases are more quickly met with treatments and vaccines than others. The bubonic plague, for example, still exists but can be easily treated with antibiotics.

Every pandemic has unique challenges, yet the premise of the AIER article is based largely on the idea that the pandemic in the 1960s and the pandemic today involved two practically interchangeable diseases. After noting that the population in the U.S. was smaller in the 1960s (200 million compared to 330 million), the article states that "in terms of lethality, [H3N2] was as deadly and scary as COVID-19 if not more so." But that really isn't the case.

While the 1968 flu was classified as a pandemic, this outbreak wasn't as deadly as previous pandemics, such as the 1918 flu.

Dr. David Morens, a senior scientific adviser at the National Institute of Allergy and Infectious Diseases, described the 1968 pandemic as "wimpy" compared to previous pandemics and noted that the total number of deaths wasn't much different than the amount of deaths seen during an average flu season.

The number of deaths caused by that pandemic in the first two years, 1968 and 1969, weren't much higher than the average seasonal flu. So, it really was kind of a pandemic that was such a wimpy pandemic it didn't make much of a blip on the radar screen.

A 2008 study published in the American Journal of Public Health that examined seasonal flu trends supports Morens' assertion. This study found that the 1957 pandemic and the 1968 pandemic did "not stand out as exceptional outliers, nor were these pandemics visually discernible from non-pandemics in seasonal or monthly influenza mortality graphs." While this flu analogy has been poorly used to describe COVID-19, it is an apt description for the H3N2 virus which, quite literally, continues to circulate as a variety of the seasonal flu.

The H3N2 virus followed a seasonal flu pattern after its initial outbreak in 1968. Generally speaking, this means that the disease peaks during the winter months before waning in the summer. Here's a chart from a study published in the Journal of Infectious Diseases showing the seasonal spread of H3N2. We added a red "X" to this chart to show when Woodstock occurred: Woodstock took place in the summer of 1969 when there were practically no reported cases of H3N2 in the U.S. The majority of U.S. deaths happened several months prior to this festival, and the second wave of this pandemic didn't hit until a few months after.

COVID-19 is not expected to follow a similar seasonal pattern. Although researchers are not entirely sure how the changing seasons will impact the spread of COVID-19, evidence exists that COVID-19 can spread in warmer climates.

Marc Lipsitch, professor of epidemiology and director of the Center for Communicable Disease Dynamics at the Harvard T.H. Chan School of Public Health, wrote:

The short answer is that while we may expect modest declines in the contagiousness of SARS-CoV-2 in warmer, wetter weather and perhaps with the closing of schools in temperate regions of the Northern Hemisphere, it is not reasonable to expect these declines alone to slow transmission enough to make a big dent.

The H3N2 virus proved to be less deadly than previous pandemics in part because it emerged  approximately 10 years after the world dealt with a similar virus, H2N2, also called the "Asian flu." As these two diseases both contained the N2 neuraminidase, populations that survived H2N2 had already built up immunity to the H3N2 virus.

Morens told us: "In 1968, the US population had partial immunity. Because the 1968 virus was H3N2 and the 1957 virus was H2N2 so the whole population had a degree of protection related to the N2 neuraminidase. So the brakes were on this pandemic before it even appeared and we knew that early on."

A vaccine for this disease was also quickly developed (although it was not widely available) just a few months after the initial outbreak. On the other hand, there are no "specific treatments for COVID-19" and a vaccine is still months, if not years, away as of this writing.

One of the arguments made in the AIER article is that the 1968 pandemic resulted in the deaths of 100,000 people, yet daily life, more or less, proceeded as normal. By comparison, the author argues, the COVID-19 pandemic has killed fewer people (as of this writing), yet has resulted in a major disruption of American life. When we take a closer look at these figures, however, we see that they aren't truly comparable.

The Centers for Disease Control and Prevention (CDC) estimates that approximately 100,000 people died in the U.S. during the H3N2 pandemic, with the majority of deaths occurring during the first wave in 1968. This figure accounts for pandemic-related deaths over the span of approximately 18 months. Comparatively speaking, COVID-19 has so far resulted in more than 80,000 deaths over an approximate 4-month span.

Of course, when we compare the death tolls from the 1968 pandemic and the COVID-19 pandemic, we also have to factor in the impact of social distancing and shelter-in place policies. While the 1968 pandemic saw some social distancing measures (more on that below), these guidelines were nowhere near as stringent as the policies put in place today. Generally speaking, H3N2 was allowed to spread unabated.

During the COVID-19 pandemic in 2020, on the other hand, the U.S. economy was basically shut down to slow the spread of the disease. But even with these extreme measures in place, COVID-19 resulted in more than 80,000 deaths during its first few months. If these social distancing measures were not put in place (i.e., if Woodstock-like festivals were allowed to go on as planned), it's reasonable to assume that the death toll would be much higher.

In fact, in April 2020, after some states started to relax their shelter-in place guidelines and allowed businesses to reopen, the Institute for Health Metrics and Evaluation (IHME) at the University of Washington revised its death toll estimate for the beginning of August from 60,000 to 135,000:

The institute wrote that the revisions reflected “rising mobility in most U.S. states as well as the easing of social distancing measures expected in 31 states by May 11, indicating that growing contacts among people will promote transmission of the coronavirus."

Were Social Distancing Measures Implemented in 1968?

While the social-distancing measures implemented in 1968 were a far cry from the policies enacted 2020, it's not accurate to say that "nothing closed" and "schools stayed open," as the AIER article stated. We found several newspaper clippings from 1968 noting that schools, businesses, and even political ceremonies were impacted by H3N2: 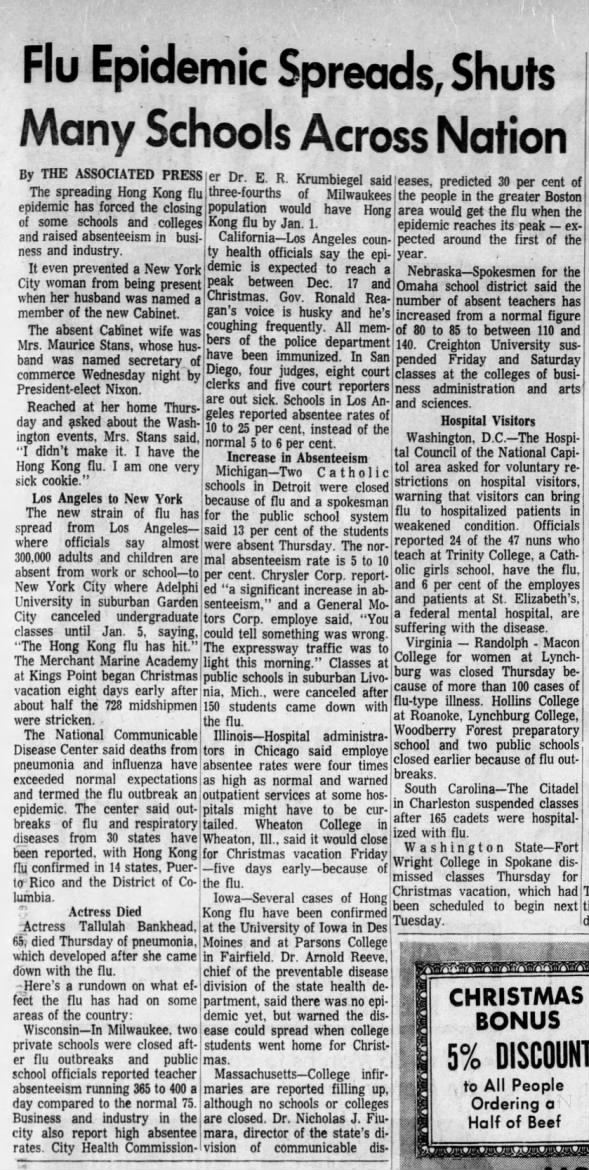 A Getty Images photograph from December 1968 shows a nurse at Cleveland's Grace Hospital in front of a sign announcing the temporary restriction of all visitors during the pandemic: Nurse Nadyne Weber stands by her notice severely restricting visiting hours at Cleveland's Grace Hospital due to a flu outbreak.

The argument that today's shelter-in place rules are unnecessary because similar rules were not implemented in the 1960s is based on a faulty comparison between two vastly different pandemics. On one hand, you have a disease that killed approximately 100,000 people over the span of 18 months during which little to no social distancing rules were implemented to stop it. On the other, you have a disease that has killed more than 80,000 people over the span of just a few months in spite of extreme self-quarantine laws that were implemented around the country.

Morens told us that if we just let things go the way we did in the Woodstock era and waited until the population reached herd immunity, the U.S. would see more than 1 million deaths from COVID-19.

Tucker, Jeffrey.   "Woodstock Occurred in the Middle of a Pandemic."     American Institute for Economic Research..   1 May 2020.