Did the British Drop a Wooden Bomb on a Decoy German Airfield?

During WWII the Germans built wooden airplanes and sometimes complete airfields to keep the Allies away from their real airfields. 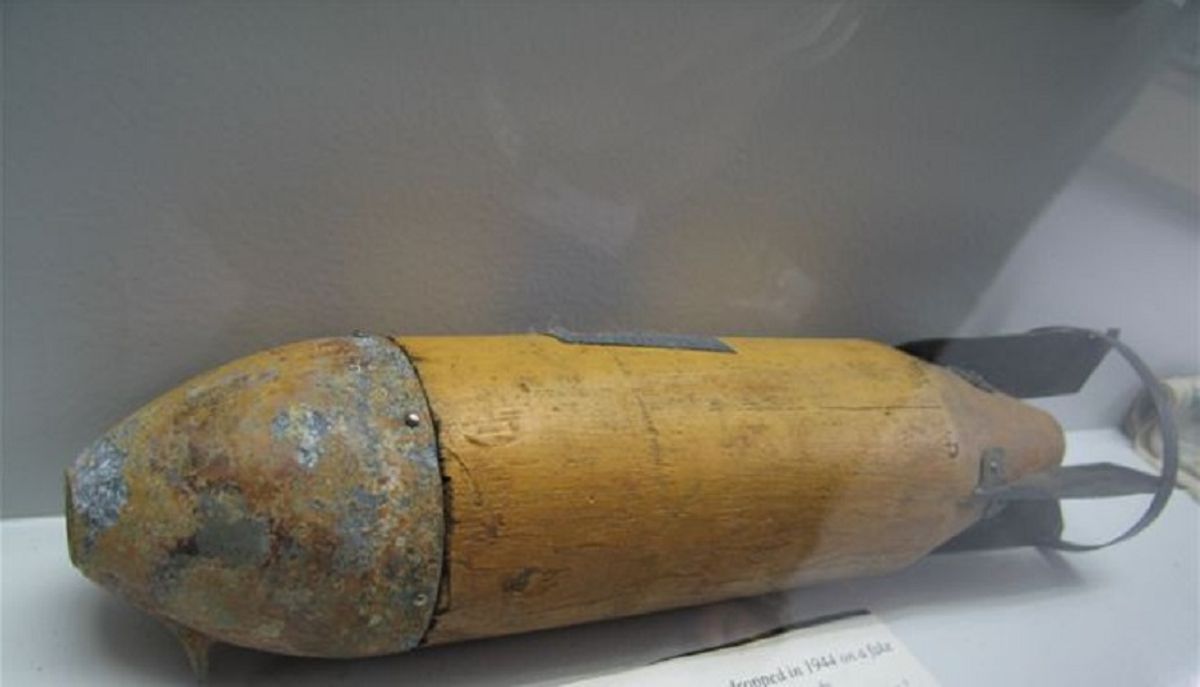 Claim:
During WWII, the British sent a plane to drop a wooden bomb on a German decoy wooden airfield.
Rating:

One military tale of one-upmanship, about one group of combatants' engaging in a defiantly symbolic gesture directed at their enemies, is the well-traveled "wooden bomb" anecdote that dates to at least the first year of World War II:

Another enemy decoy, built in occupied Holland, let to a tale that has been told and retold every since by veteran Allied pilots. The German "airfield," constructed with meticulous care, was made almost entirely of wood. There were wooden hangers, oil tanks, gun emplacements, trucks, and aircraft. The Germans took so long in building their wooden decoy that Allied photo experts had more than enough time to observe and report it. The day finally came when the decoy was finished, down to the last wooden plank. And early the following morning a lone RAF plane crossed the Channel, came in low, circled the field once, and dropped a large wooden bomb.

As far as we know, the "wooden bomb" story's earliest telling comes from CBS news correspondent William L. Shirer's book, Berlin Diary: The Journal of a Foreign Correspondent 1934-1941,, in which he recorded the following entry for 27 November 1940:

X tells me a funny one. He says the British intelligence in Holland is working fine. Both sides in this war have built a number of dummy airdromes and strewn them with wooden planes. X says the Germans recently completed a very large one near Amsterdam. They lined up more than a hundred dummy planes made of wood on the field and waited for the British to come over and bomb them. Next morning the British did come. They let loose with a lot of bombs. The bombs were made of wood.

Shirer did not claim to have witnessed the event, or even to have heard about it directly from any of the participants; he merely repeated a humorous anecdote told to him by an unnamed source. Multiple variants of this narrative event, with differing details (e.g., the incident occurred later in the way, the wooden bomb was dropped by Germans on a British decoy airfield rather than vice-versa, the fake bomb was dropped in Germany by American pilots).

The use of decoy airfields and other make-believe facilities during World War II was more than legend, of course; both the Germans and the Allies engaged in many such ruses, one of the most famous examples being the fictitious First U.S. Army Group (FUSAG) built up around General George S. Patton in England to mislead the Germans into believing the main Allied invasion of France would take place at the Pas de Calais rather than the beaches of Normandy. And dangerous missions were sometimes undertaken more for their psychological value than for their practical results, such as General James H. Doolittle's bombing raid on Tokyo in April 1942). However, several aspects of this tale tend to place it far more in the "wartime morale-building joke" column than the "historical event" column:

Update: As has been pointed out by many on social media, the so-called "wooden bomb" pictured at the top of this article is more likely an aircraft float light: