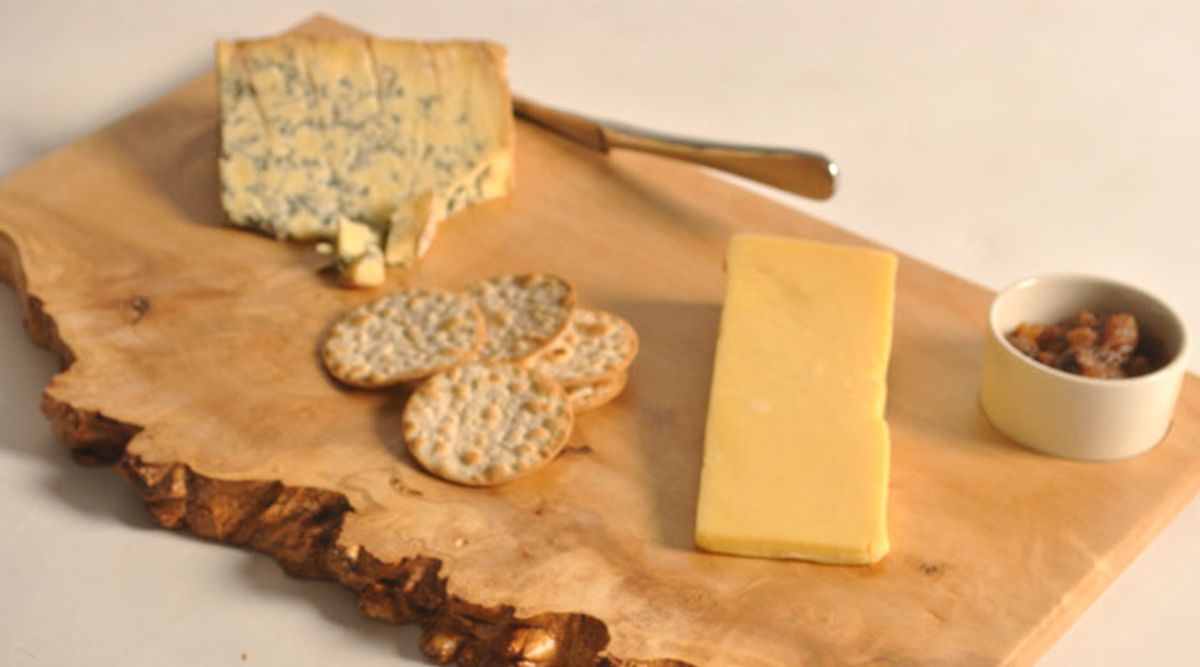 Claim:
Several widely-available cheeses are partially made from wood.
Rating:

The percentage total of the ingredient cellulose in some cheeses attracted the attention and ire of the Food and Drug Administration.

Cheese is made from actual wood, wood pulp, or anything people would recognize as wood-related in its raw state.

The pervasiveness of overuse of cellulose in cheese.

In February 2016, multiple outlets prompted consumer concern with claims that the Food and Drug Administration discovered wood in many mass-market cheeses, including some higher-end varieties. The rumor wasn't due to poor reading comprehension, as multiple headlines left the impression that ordering cheese on your burger could lead to a mouthful of splinters:

This cheese company has been putting wood in their parmesan for 30 yearshttps://t.co/75k2AFl6V3

Wood in your Parmesan? How to make sure you're getting the real cheese https://t.co/Fc26zvCRaQ pic.twitter.com/GBaD5Fdxqc — TODAY (@TODAYshow) February 18, 2016

"Wood," "wood in parmesan," and "cheese ... may be wood" weren't very ambiguous ways to describe the claim.  On 17 February 2016, USA Today published an article that claimed:

Parmesan cheese or wood pulp? Chances are when you sprinkle parmesan on your spaghetti you may be getting a little of both. ... while the idea of eating a product that contains wood pulp doesn’t seem appetizing, you probably do it more than you think.

That item cited Bloomberg Businessweek, the outlet that apparently kicked off the flurry of wood worry. After mentioning a 2012 FDA investigation, the site reported they'd done their own independent testing for "wood pulp" in several cheeses:

Some of the less sensational aspects of that article provided a clearer picture of the actual controversy.  Bloomberg Businessweek clarified the ingredient in question was actually cellulose (not "wood pulp" per se) and that blending of lesser cheeses was part of the overall dispute:

Some grated Parmesan suppliers have been mislabeling products by filling them with too much cellulose, a common anti-clumping agent made from wood pulp, or using cheaper cheddar, instead of real Romano. Someone had to pay. Castle President Michelle Myrter is scheduled to plead guilty this month to criminal charges. She faces up to a year in prison and a $100,000 fine.

Although most outlets referenced "cellulose," the FDA's list of food additives generally recognized as safe primarily listed carboxymethylcellulose (cellulose gum) as an approved additive in cheese production, which isn't necessarily made from wood. The FDA said:

Cellulose is a major constituent of many foods of plant origin. As such it is a significant portion of the diet, but is neither degraded nor absorbed. Cellulose derivatives considered in this report are virtually unabsorbed and little or no degradation of absorbable products occurs in the human digestive tract. In man, consumption of large amounts appears to have no effect other than providing dietary bulk, reducing the nutritive value of such foodstuffs and possibly exerting a laxative effect.

Many of the FDA's regulatory provisions pertained not to the safety of the carboxymethycellulose, but concentration thresholds for specific cheese labeling (in this instance, pasteurized cheese spread):

One or any mixture of two or more of the following: Carob bean gum, gum karaya, gum tragacanth, guar gum, gelatin, sodium carboxymethylcellulose (cellulose gum), carrageenan, oat gum, algin (sodium alginate), propylene glycol alginate, or xanthan gum. The total weight of such substances is not more than 0.8 percent of the weight of the finished food.

In this case, the FDA appeared less concerned with the safety of cellulose in cheese and more so with labeling standards. A 2011 Mayo Clinic item focused on the increasing use of cellulose in foods for a variety of reasons, but did not mention any health risks:

We're seeing more foods with added fiber, such as cellulose, because most people aren't eating enough foods that are naturally high in fiber — namely vegetables, fruits and whole grains. Manufacturers are also adding cellulose because it means they can use less fat and sugar without losing the desired mouthfeel or moistness. The rising cost of flour, sugar and oil may be another reason for this trend.

Castle Cheese was the recipient of a FDA warning letter dated 11 July 2013, and the mention of cellulose had to do with possible labeling inconsistencies, not wood in cheese:

3. Your International Packing Parmesan Cheese, (b)(4) Romano 100% Grated Cheese and (b)(4) 100% Grated Parmesan Cheese products are adulterated within the meaning of Section 402(b)(4) of the Act [21 U.S.C. § 342(b)(4)] in that a substance has been added to increase the products’ bulk and weight. Specifically, cellulose and/or starch were used to increase the weight of the cheese base used to manufacture your products.

Another approach during the February 2016 wood cheese dustup came in the form of a February 2016 Bon Appétit article.  The piece made a distinction between proper labeling of specific cheeses and the presence of "wood pulp" in parmesan:

Eating cellulose won’t kill you. There are no known harmful side effects from adding it to food, and it’s completely legal.

“Cellulose is a non-digestible plant fiber, and we actually happen to need non-digestible vegetable fiber in our food—that’s why people eat bran flakes and psyllium husks,” says Jeff Potter, author of Cooking for Geeks.

And though it makes for more sensational headlines, it’s not quite accurate to claim that something made with cellulose is part “wood pulp,” as implied in a rather breathless Bloomberg News headline.

Noting that cellulose was "completely safe to eat," the magazine again expressed skepticism at the widespread conflation of cellulose and "wood pulp":

So could part of the faux-Parmesan cheese you eat once have had a tire-swing hanging from it? Sure ...But it could also have been made in part from a crateful of apples that didn’t make it onto supermarket shelves, or corn husks, or any variety of plant matter. It could even have been made from the crate the apples came in. By the time it becomes cellulose, it’s pretty much just a tasteless powder whose primary purpose in life is to take up space… It’s like an accountant at a rock concert after-party.

It’s worth noting, by the way, that the official FDA warning letter to Castle Cheese Inc. lists cellulose and starch as adulterants they discovered, but that they don’t mention wood pulp anywhere in the text. Blame easy conflation by an overeager headline writer. We’ve all done it.

The cellulose-in-food scare was nothing new. On 2 July 2014, Slate covered a then-current panic over wood pulp in burgers:

This media meme, catching on like wildfire burning up so much delicious wood pulp, is not only alarmist but 100 percent misleading. ... It’s pure fiber, so it contains no calories. Cellulose is a natural component of all plants’ cell walls and is therefore in contained in every fruit or vegetable you might care to eat ...

A single article in February 2016 launched a wave of responses to the "news" that cheese contained cellulose, widely described as "wood pulp." But the news was not all that new, as even the original item referenced a controversy that began in late 2012. The FDA indeed investigated cheese manufacturers over the presence of cellulose in cheese, but only in the larger context of honest labeling (not safety or health concerns). Cellulose is considered safe in all expected concentrations (though it could certainly dilute the flavor of parmesan) and it didn't in any way resemble wood or wood pulp as many outlets suggested.

Finally, the early 2016 outpouring of concern was not new at the time it occurred. In 2014, the same media "meme" latched on to "wood pulp in fast food," ignoring its presence in a vast quantity of other widely eaten foods.

While it was true many cheeses were held to strict standards of labeling, the controversy over cellulose was confined to purity and misrepresentation, not the sneaky addition of wood to otherwise benign cheese.