Did a Woman Go To Jail for Wearing Slacks in 1938?

Helen Hulick wore a controversial pair of slacks to court while testifying. 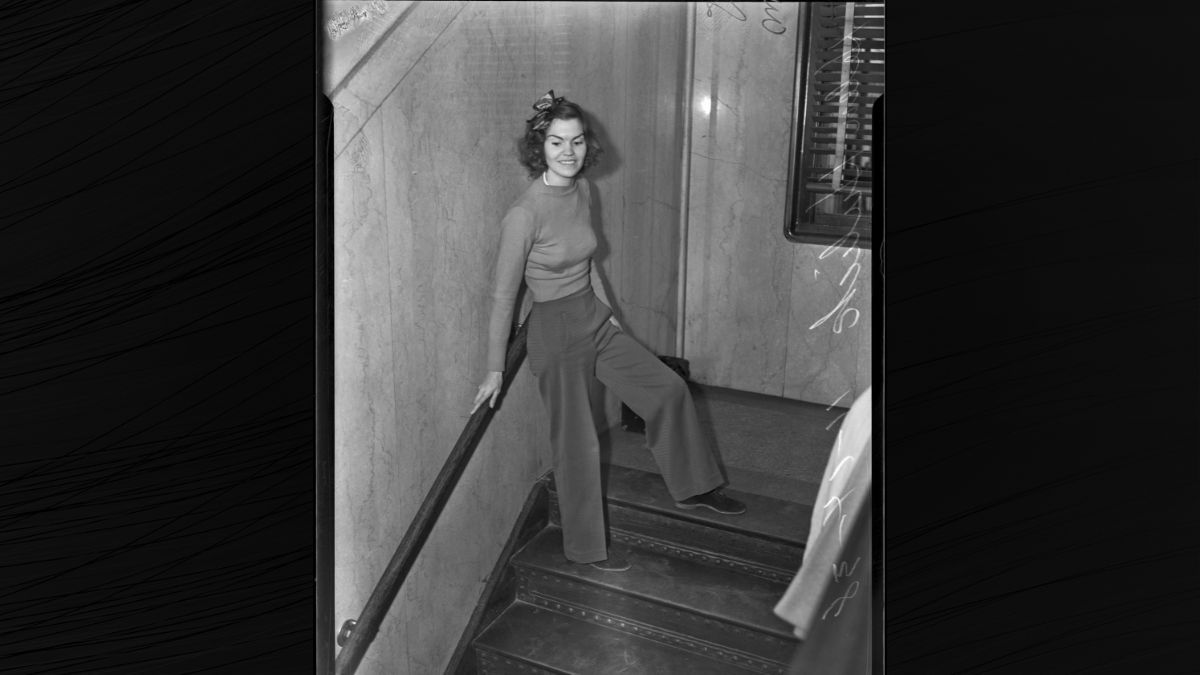 Claim:
In 1938, Helen Hulick was held in contempt of court and sent to jail for repeatedly wearing slacks to court after being told by the judge to wear a dress.
Rating:

In 1938, kindergarten teacher Helen Hulick was more comfortable wearing slacks to court, but this would not do for Judge Arthur S. Guerin. Hulick, who came to court to testify against two men accused of burglarizing her house, repeatedly turned up to proceedings in slacks until she was held in contempt of court and sent to jail by the judge.

The issue began on Nov. 9, 1938, in a courtroom in downtown Los Angeles, as reported by the Los Angeles Times archival account of the incident. Hulick, who was 28 years old at the time, arrived in court wearing slacks, at which point Guerin postponed the hearing, telling her to come back wearing a dress.

Hulick was quoted in the 1938 issue of the Los Angeles Times saying: “You tell the judge I will stand on my rights. If he orders me to change into a dress I won’t do it. I like slacks. They’re comfortable.”

She returned on Nov. 15, 1938, and the judge once again reprimanded her. According to the Los Angeles Times archives:

After she was sworn in as a witness, Judge Guerin stopped the proceedings and declared:

“The last time you were in this court dressed as you are now and reclining on your neck on the back of your chair, you drew more attention from spectators, prisoners and court attaches than the legal business at hand. You were requested to return in garb acceptable to courtroom procedure.

“Today you come back dressed in pants and openly defying the court and its duties to conduct judicial proceedings in an orderly manner. It’s time a decision was reached on this matter and on the power the court has to maintain what it considers orderly conduct.

“The court hereby orders and directs you to return tomorrow in accepted dress. If you insist on wearing slacks again you will be prevented from testifying because that would hinder the administration of justice. But be prepared to be punished according to law for contempt of court.”

Slack-shrouded Miss Hulick was accompanied by Attorney William Katz, who carried four heavy volumes of citations to appear in whatever dress she chose.

“Listen,” said the young woman, “I’ve worn slacks since I was 15. I don’t own a dress except a formal. If he wants me to appear in a formal gown that’s okay with me.

“I’ll come back in slacks and if he puts me in jail I hope it will help to free women forever of anti-slackism.”

Guerin’s “anti-slackism” continued the next day when Hulick returned in slacks and he held her in contempt of court, giving her a five-day sentence and sending her to jail. According to the Los Angeles Times, “after being divested of her favorite garment by a jail matron and attired in a prison denim dress, Miss Hulick was released on her own recognizance after her attorney, William Katz, obtained a writ of habeas corpus and declared he would carry the matter to the Appellate Court.”

According to a New York Daily News story from 1938, Hulick was only held in jail for a few hours.

Hundreds of letters were sent to the courthouse protesting this sentencing. The Appellate Court overturned Guerin’s contempt citation during a habeas corpus hearing, and Hulick was free to wear slacks to court.

However, she returned for a follow-up to the courthouse in January 1939 in a dress, described in the UCLA library’s Los Angeles Times Photographic Collection as “chic feminine attire.” Helen Hulick, who had been found in contempt of court for wearing pants, appears in court wearing a dress, Los Angeles, 1939. (Los Angeles Times Photographic Collection)

"Helen Hulick, Who Appeared in Court to Testify in the Burglary of Her Home, Wears Pants, Which the Judge Presiding over Her Case Objected to, Los Angeles, 1938." UCLA Library Digital Collections. https://digital.library.ucla.edu/catalog/ark:/21198/zz002h8j77. Accessed 2 Sept. 2022.