Was a Woman Attacked on Camera for Wearing a 'Make America Great Again' Hat in Hollywood?

YouTube personality Blaire White initiated a confrontation at an anti-Trump protest, according to police. 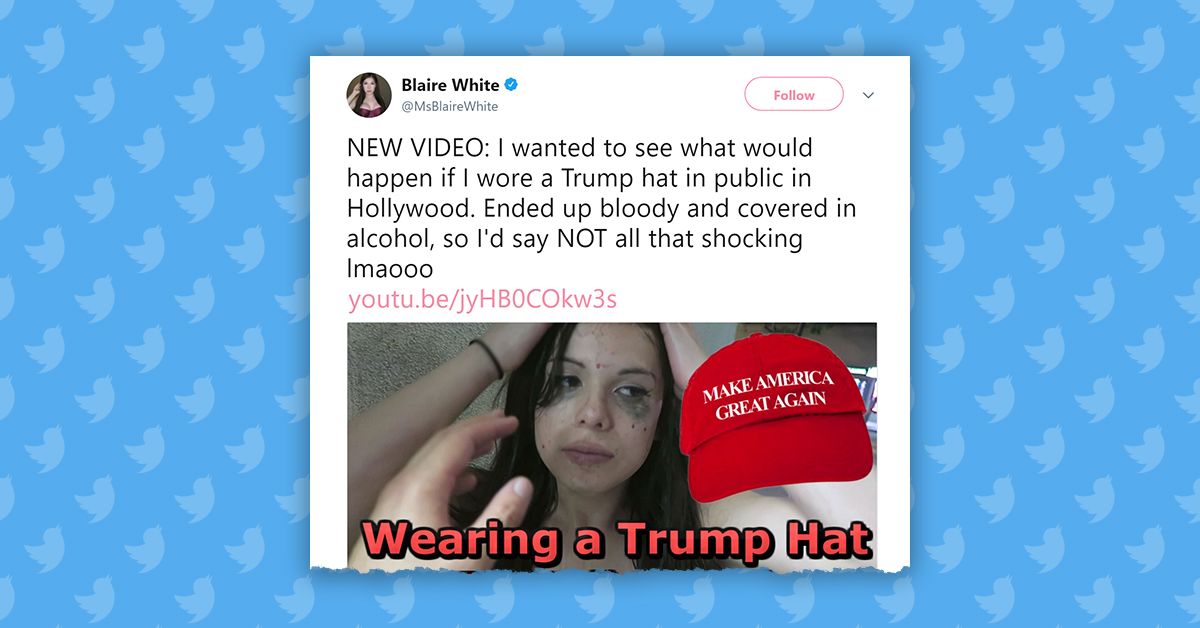 Claim:
A woman was attacked in Hollywood because she was wearing a pro-Donald Trump hat.
Rating:

YouTube star Blaire White did get into an altercation over her red "Make America Great Again" hat when she went to an anti-Trump protest on Hollywood Boulevard.

Later in the video White has a drink thrown in her face; it's unclear if this was staged.

On 11 November 2017, YouTube personality Blaire White descended upon a "Refuse Fascism" anti-Donald Trump protest on Hollywood Boulevard's Walk of Fame with the pretense of performing a social experiment in which she wore a Trump hat whilst out and about in the supposed liberal mecca of Los Angeles (although the Walk of Fame is regularly packed with tourists from all over the world).

NEW VIDEO: I wanted to see what would happen if I wore a Trump hat in public in Hollywood. Ended up bloody and covered in alcohol, so I'd say NOT all that shocking lmaooo https://t.co/qKOkjD9maE pic.twitter.com/RGsNmbkgg2

In the resulting roughly six-minute video, White claims she was assaulted twice, once at the anti-Trump rally and again when a pedestrian threw what appeared to be a drink in her face. Police told us White initiated an altercation at the rally by crossing a Los Angeles Police Department's divider between pro-Trump and anti-Trump protesters. Because she did not file a police report that night, it is unclear whether the incident with the drink was staged for the purpose of making a viral video (which was then featured by popular conservative web sites like Breitbart.com and InfoWars).

White and her boyfriend Joey Sarson started their Los Angeles adventure that day in West Hollywood, a city known for its high concentration of LGBT residents. After uneventfully walking the streets and even tipping a go-go dancer at The Abbey bar while wearing the conspicuous "Make America Great Again" cap, White concluded, "The gays are pretty polite." So the duo took the act to the Walk of Fame, presciently noting:

WHITE: Now we're gonna go to Hollywood Boulevard, which if you guys don't know, that is like the Walk of Fame here. That might be something different. It's gonna be different.

As Sarson predicted, it was bad — probably because the pair conveniently wandered onto the Boulevard donning their Trump hats at a time when there was an anti-Trump protest underway, claiming they didn't know the event was scheduled, but somehow possessing clairvoyant knowledge of a looming fight.

In the video, which is heavily edited, the pair can be seen standing in front of a truck from which anti-Trump protest leaders were rallying the crowd with microphones. Although the video is blurry, it appears the two captured their attention. At one point, according to explainer text on the video, a protester snatches Sarson's red cap and throws it. The video then cuts to White grappling with a protester for the hat before being separated by a Los Angeles police officer. She then points out that one of her acrylic fingernails had been ripped off and was bleeding.

According to White's video caption:

Disclaimer: We never did anything remotely inflammatory or investigative to anyone. The point of this video was simply to wear a conservative symbol in a very liberal area.

That is not exactly what happened, according to Los Angeles police Lt. Michael Ling. He told us the protest was permitted in the area of Hollywood Boulevard and Highland Avenue (in the heart of Hollywood) and that police had roped off a dividing line between pro-Trump and anti-Trump groups to keep them separated and to avoid violence. White and Sarson crossed into the anti-Trump crowd, which incited the physical contact seen in the video. Ling said police helped White get up and and away from the area, and that she declined to file a police report or press charges.

Later in the video, White was giving a rundown of what happened at the protest when a man walked by her and threw some sort of liquid in her face, resulting in smeared makeup around her eyes and cheeks. She did not file a police report about that incident either. Ling said that detectives planned to follow up to see if she wishes to do so. Although it is unclear whether this aspect of the video was also staged, it would not be the first of its kind. Conspiracy theorist Alex Jones had coffee thrown in his face three months earlier in an apparent on-camera stunt. White's video was featured by Jones' conspiracy site InfoWars.

White is a YouTube star with a following of 360,000 fans, who has made a name for herself with sensational videos like "Crashing a Feminist March," "Black Lives Matter Is Trash," "Fat Acceptance Is Stupid," and "There Are Only 2 Genders." According to RationalWiki:

Blaire White is a YouTube talker who frequently discusses transgender/LGBT/feminist issues from an antifeminist MRA and "anti-SJW" perspective. Because she's also a trans woman, her views get extra respect — despite often holding views harmful to other trans people. Many of her videos feature sensationalized titles.

The video can be viewed in its entirety here: