The details behind this image are still a bit unclear. 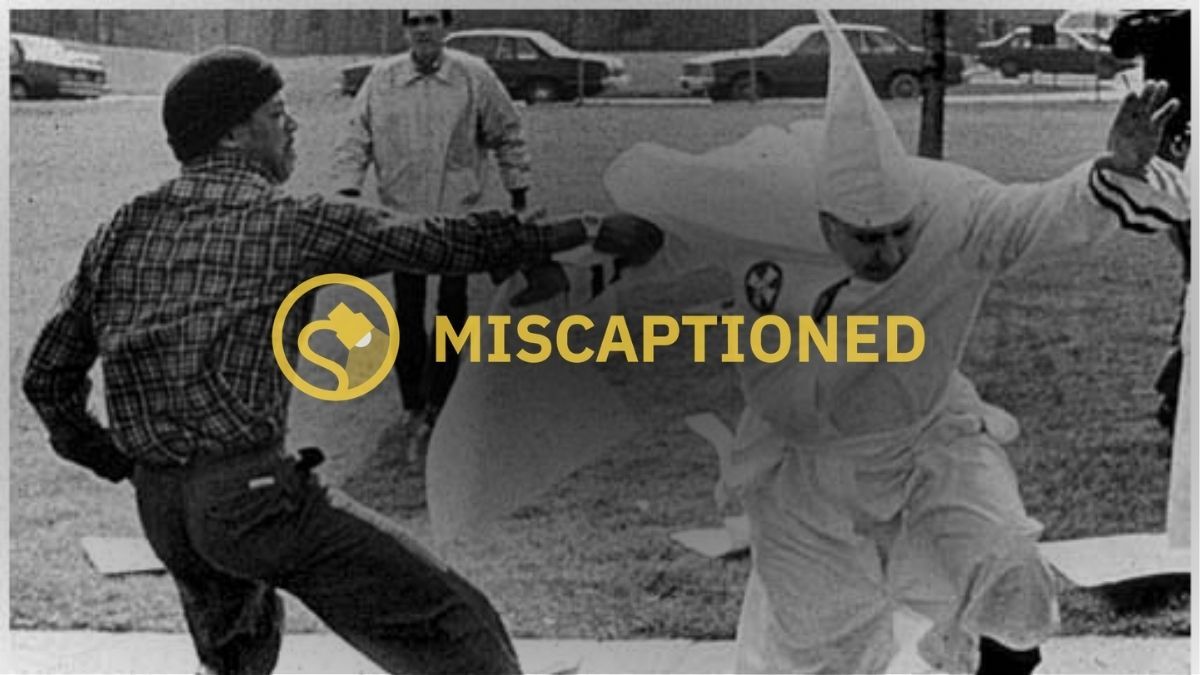 In observance of Black History Month in February 2021, social media users began sharing an image that supposedly showed a man named Willie "Whoopass" Johnson hitting a member of the Ku Klux Klan. This photograph was accompanied by the claim that Mr. Whoopass was the first Black man to be photographed fighting back against the KKK: This appears to be a genuine photograph of a man hitting someone wearing KKK garb. However, that person was not named Willie "Whoopass" Johnson, nor was he the first Black man to fight back against the klan.

This image has been circulating online since at least 2009. Early postings of the picture, such as one example found on the "Gothlaw" blog, made no claims about the Black person's identity or the alleged historic nature of the photograph. Rather, the picture was simply used to illustrate posts about the history of the KKK and racial tensions in the United States.

Around 2015, this image came to be shared in a more humorous fashion, and as the photograph made the rounds of the internet, it was accompanied by a number of different captions. At first, the person in this image was nicknamed "Whoopass Wilson," while a later version claimed that this image depicted a man named Tyrone "Fuck the Klan" Johnson. These nicknames were later combined to form the current Willie "Whoopass" Johnson version: In other words, these captions do not relay factual information about this picture. The name "Willie Whoopass Johnson" was simply made up out of whole cloth and attached to this image for humorous effect.

It should also be noted that this photograph does not document the first Black man to fight back against the Ku Klux Klan. While we have not been able to source this image, it was likely taken — judging by the cars and the clothing — in the 1960s or '70s. As the Ku Klux Klan has been around since the 1860s, it's safe to say that the man in this photograph was not the first to fight back against the KKK.

While we are not certain as to who was the first Black man to be photographed punching a member of the KKK, we can say that Black men and women have been fighting against the terrorism of the Ku Klux Klan for more than a century:

In 1919, as Black soldiers returned home from fighting overseas in World War I, they expected to find themselves treated as equals. Instead, they faced a resurging Ku Klux Klan and a rash of race-based violence, as History.com noted:

During the Red Summer, massive anxiety became mass violence. Between April and November of 1919, there would be approximately 25 riots and instances of mob violence, 97 recorded lynchings, and a three day long massacre in Elaine, Arkansas during which over 200 black men, women, and children were killed after black sharecroppers tried to organize for better working conditions. The Ku Klux Klan, which had been largely shut down by the government after the Civil War, experienced a resurgence in popularity and began carrying out dozens of lynchings across the south.

Just a few years earlier, many young black men had heeded Wilson’s call to make the world “safe for democracy” and gone off to fight for America in one of history’s bloodiest wars. Now they had come back to a country that recognized neither their service nor their humanity. Having just returned from battle, however, black veterans were not inclined to take the abuse lying down. Across the country, former soldiers used their government-provided weapons training to defend their neighborhoods against vicious white mobs.

“Black people [formed] ad hoc self-defense organizations to try to keep white folks from terrorizing their communities,” says Simon Balto, a Professor of African American History at The University of Iowa and author of Occupied Territory: Policing Black Chicago from Red Summer to Black Power. “Black veterans are instrumental in that.”