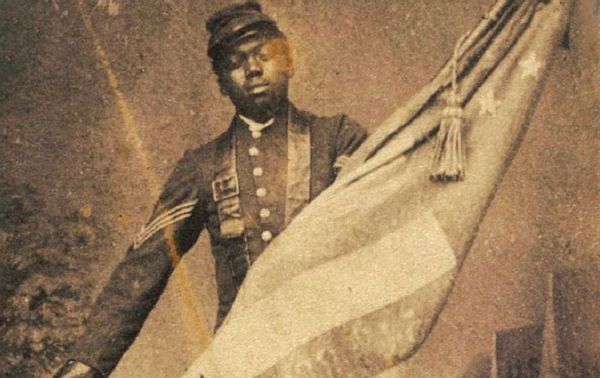 Claim:
William Harvey Carney was the first African-American serviceman to be awarded the Medal of Honor.
Rating:

A Facebook page promoting support for President Donald Trump attempted to contrast the "kneeling during the national anthem" protests against racial injustice that some NFL players have engaged in with the real-life military heroics of U.S. Army Sgt. William Harvey Carney, who became the first African-American recipient of the Medal of Honor for his service against the Confederacy during the Civil War.

On 14 August 2018, Facebook that page posted a photograph of Carney under the caption "Maybe the NFL should put this up in every locker room": The image seen here is a real photograph of Carney, taken in the early 20th century. According to the U.S. Department of Defense's profile of Carney, he was so honored for his actions during the 54th Massachusetts Colored Infantry's assault on Fort Wagner, South Carolina -- a battle that was depicted in the climactic scene of the 1989 Civil War film Glory (although Carney himself was not represented in that movie):

On July 18, 1863, the soldiers of Carney's regiment led the charge on Fort Wagner. During the battle, the unit's color guard was shot. Carney, who was just a few feet away, saw the dying man stumble, and he scrambled to catch the falling flag.

Despite suffering several serious gunshot wounds himself, Carney kept the symbol of the Union held high as he crawled up the hill to the walls of Fort Wagner, urging his fellow troops to follow him. He planted the flag in the sand at the base of the fort and held it upright until his near-lifeless body was rescued.

Even then, though, he didn't give it up. Many witnesses said Carney refused to give the flag to his rescuers, holding onto it tighter until, with assistance, he made it to the Union's temporary barracks.

Carney lost a lot of blood and nearly lost his life, but not once did he allow the flag to touch the ground. Carney was promoted to the rank of sergeant for his actions.

Many honors connected with Civil War service were not awarded until long after the fact, so Carney had to wait until 1900 -- nearly 37 years -- to receive his medal. By that time other African-Americans had received Medals of Honor, but because the actions of Carney's that earned him his medal occurred earlier than all the others', he is generally considered to be the "first" African-American recipient of the Medal of Honor.