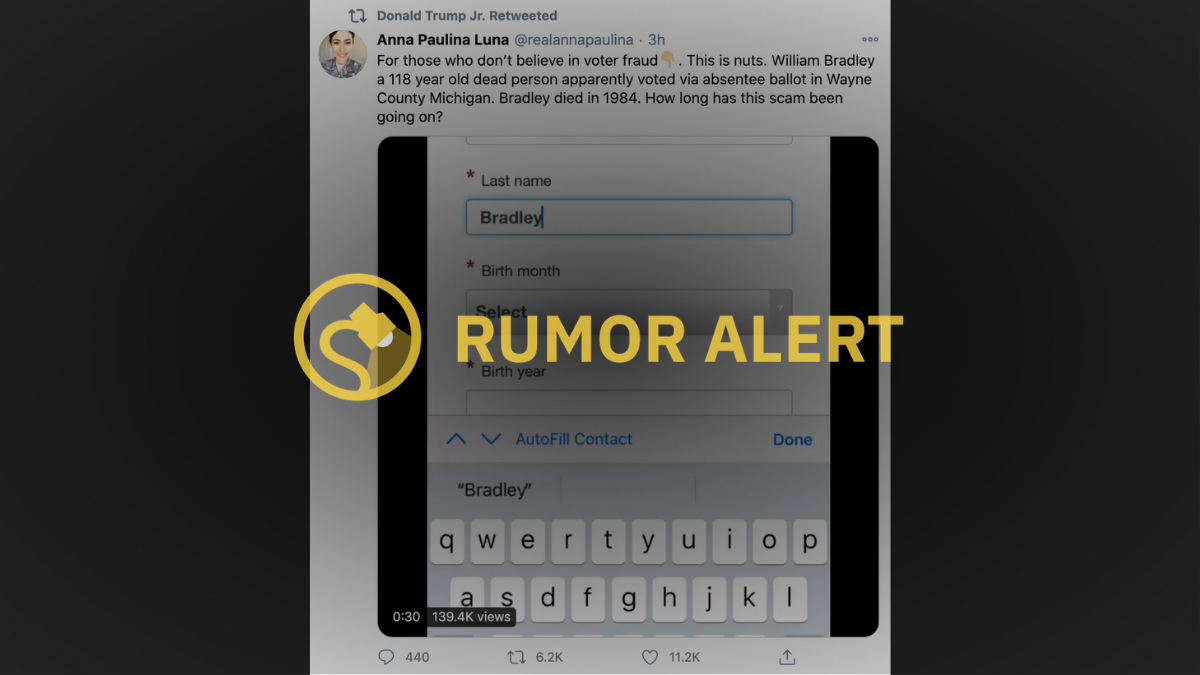 In the aftermath of Election Day amid widespread, unsubstantiated allegations and conspiracy theories of electoral fraud, figures from the reelection campaign of U.S. President Donald Trump promoted content that was presented as proof of electoral fraud in Michigan — namely that individuals who were deceased or implausibly old had voted in the state of Michigan.

For those who don’t believe in voter fraud.
This is nuts. William Bradley a 118 year old dead person apparently voted via absentee ballot in Wayne County Michigan. Bradley died in 1984. How long has this scam been going on? Similar videos were published by Austin Fletcher, a right-wing online activist who uses the moniker "Fleccas," and in the UK, the pro-Brexit campaign Leave.EU promoted the "William Bradley" claim on Twitter.

Claims of widespread electoral fraud are very often politically motivated, and seize upon minor, rare, and isolated discrepancies or mistakes to make exaggerated allegations of "rampant" corruption or malfeasance. As Snopes has documented in the past, claims centering on "dead people voting," "dead people registered to vote" or "more voters registered than living adults" are especially prone to such misrepresentation, and are typically explained by either clerical and record-keeping errors, or the citation of out-of-date voter registration records.

In response to our inquiries, a spokesperson for Michigan's secretary of state effectively refuted claims that the content in question constituted evidence of electoral fraud. In an emailed statement sent to Snopes, the spokesperson explained that, even where discrepancies or clerical errors take place, safeguards are in place that ensure that no invalid ballots are counted: