The viral claim seemed to be an attempt to counter U.S. President Donald Trump's framing of Black Lives Matter protests. 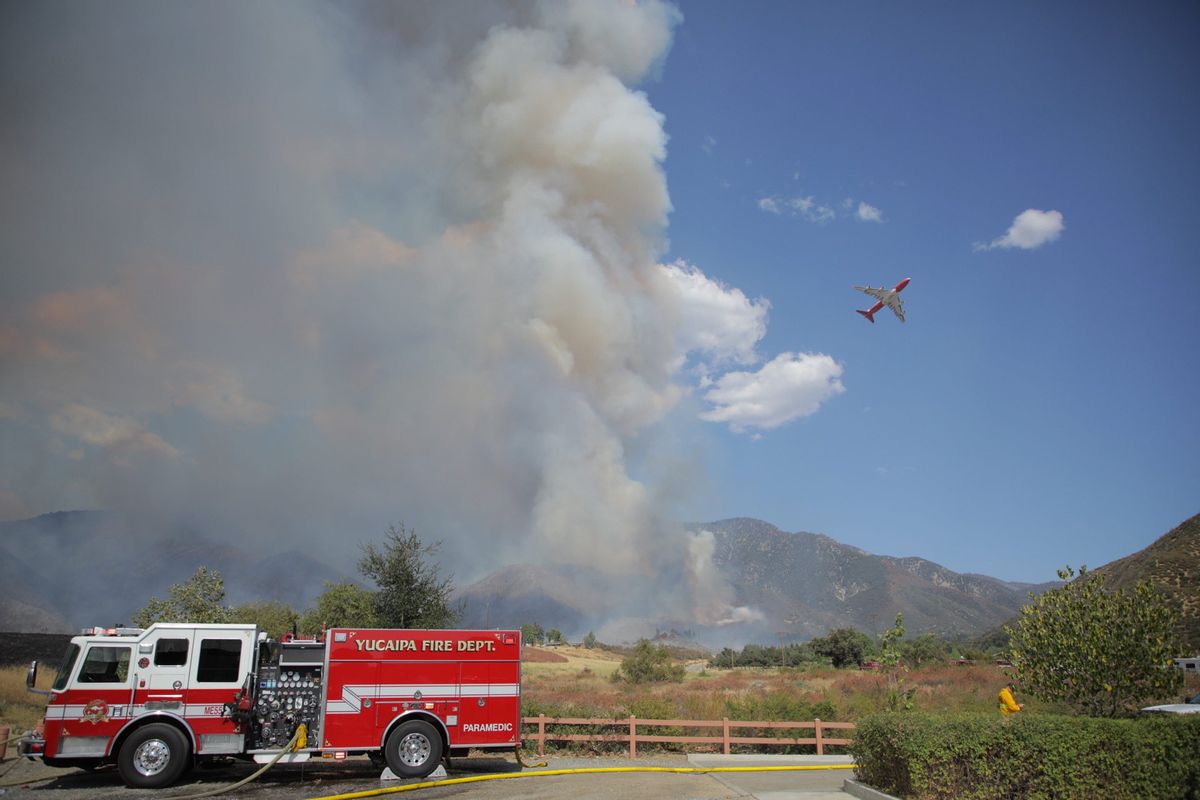 In September 2020, Snopes received questions about a viral Facebook post that alleged one wildfire in California caused more property damage than all Black Lives Matter protests since the start of the year.

The meme referred to a wildfire in the San Bernardino National Forest that authorities said started on Sept. 5 in Yucaipa (about 70 miles east of Los Angeles) when a family used a "smoke generating pyrotechnic device" during a gender reveal party to celebrate the sex of their coming newborn. In less than two weeks, the fire spread to swallow more than 19,000 acres across San Bernardino and Riverside counties, per the California Department of Forestry and Fire Protection (CAL FIRE). On Sept. 18, authorities announced a firefighter died battling the blaze. The Facebook post read as follows: "A single gender-reveal party in California has caused more property damage than all the 2020 [Black Lives Matter] protests combined," referring to protests in cities nationwide against police use of excessive or deadly force against Black Americans, such as George Floyd. We should note here: The demonstrations against police brutality varied in intensity in 2020, including some peaceful marches organized by Black Lives Matter (BLM) leaders as well as some chaotic scenes of people breaking into businesses, stealing, and setting fires at night. That said, it is inaccurate to define "BLM protests" as only the latter — gatherings of unlawful behavior — but for the purpose of this report, we only considered demonstrations that did result in property damage, considering the wording of the claim.

Additionally, discussions about property damage caused by 2020 protests was a flashpoint in the country's political divide in the lead up to the November presidential election, with some high-profile Democrats urging peaceful protests instead to call attention to deep-rooted racism within American society. Meanwhile, conservatives led by U.S. President Donald Trump blamed the destruction by protesters on "Liberal Governors and Mayors" and believed it would intensify in suburban and rural areas unless voters reelected him.

Posts like the one above seemed to be an attempt to counter the president's position by arguing that property damage caused by protesters paled in comparison to the destruction of the California wildfire. Below, however, we point out the holes in that argument and show why it makes a false comparison.

The Claim Pertains to 'Property Damage' —  Not Acres Burned

Firstly, to unpack the claim, we considered its wording: the viral post did not mention general destruction or damage caused by either the fire or protests, nor injuries or deaths, but rather "property damage," specifically. That meant we did not consider acres burned by the wildfire, or injuries or deaths caused by either the fire or demonstrations, to measure the validity of the post.

Next, for our analysis, we referred to Cornell Law School's law dictionary, which defines property damage as any "injury to real or personal property through another's negligence, willful destruction, or by an act of nature," such as damage to vehicles, fences, homes, or any other possession. We used that definition for our investigation.

After that, we researched fire authorities' investigation into the Yucaipa-area fire that started at a gender reveal party, which they have dubbed the "El Dorado" fire. On Sept. 5, surveillance video apparently recorded a couple with several children walking into a grassy area while another person lit a device, Capt. Bennet Milloy of CAL FIRE told CNN. After the device ignites, the video reportedly showed the family scrambling and grabbing water bottles to try to douse flames, per Milloy.

Then, we considered the numerous wildfires sweeping California in addition to the El Dorado fire. As of this writing, California firefighters were battling a total of 14 wildfires spanning more than 2.5 million acres, per CAL FIRE. The El Dorado wildfire was the fourth smallest among them, and firefighters had contained roughly 66% of it via man-made barriers, roads, or bodies of water. Total, California fires in 2020 damaged or destroyed 6,292 properties — including barns, garages, homes, businesses, and industrial buildings, per the state agency.

But the El Dorado Fire, to which the claim referred, wrecked or destroyed 16 structures on its own. The San Bernardino Sun reported: "Twelve people have been injured in the fire that has destroyed four homes and damaged two others, as well as several outbuildings." Next, we sought evidence that could quantify property damage during BLM protests nationwide since the start of the year. Per a map of demonstrations based on news reports and social media posts compiled by Alex Smith, a Geographic information Systems (GIS) analyst in Tuscan, Arizona, almost 4,500 cities globally hosted such protests in 2020, covering every U.S. state.

Among them was Minnesota, where thousands of people took to the streets in Minneapolis and St. Paul, for example, after the death of Floyd — a Black resident who died after a white police officer knelt on his neck for about nine minutes during a 911 call to investigate a counterfeit $20 bill. For days, peaceful marches during the day were followed by vandalism and destruction at night, causing millions of dollars in property damage in more than 1,500 locations, per local news reports.

According to The Star Tribune, which crowdsourced stories of the destruction, the damaged properties included more than 260 restaurants, 200 stores, 80 grocery stores, 50 homes across the Twin Cities (see the full list here), as well as the Minneapolis Police Department's 3rd Precinct headquarters, which sustained heavy fire damage. The newspaper reported:

The Midtown Global Market area experienced one of the most concentrated tolls during the Floyd riots. More than a dozen businesses near E. Lake Street and Chicago Avenue were destroyed by fire, and a few dozen more reported fire damage with many being burned severely.

In other words, the number of properties or vehicles damaged in connection to BLM protests in Minneapolis alone was almost 100 times greater than that destroyed by the El Dorado fire.

Minneapolis was not the only city where residents destroyed buildings by fires or flooding, broke windows, damaged cars or vandalized storefronts after police shot a Black community member in summer 2020. In Atlanta, Georgia, for example, protesters burned down a Wendy's restaurant, where police fatally shot Rayshard Brooks. And in Kenosha, Wisconsin, protesters damaged or destroyed buildings, including a facility run by the Wisconsin Department of Corrections after a police officer shot Jacob Blake — leaving him paralyzed from the waist down.

In sum, as of this writing exponentially more structures nationwide were damaged in connection to BLM protests in 2020 than the El Dorado fire, though the exact extent to the property damage (per the legal definition) during the demonstrations was unknown. For that reason, we rate this claim "False."