Did Wild Dogs Kill a Two-Year-Old Boy at a Zoo?

A pack of wild dogs attacked and killed a two-year-old child at a Pittsburgh zoo, but that tragedy took place several years ago. 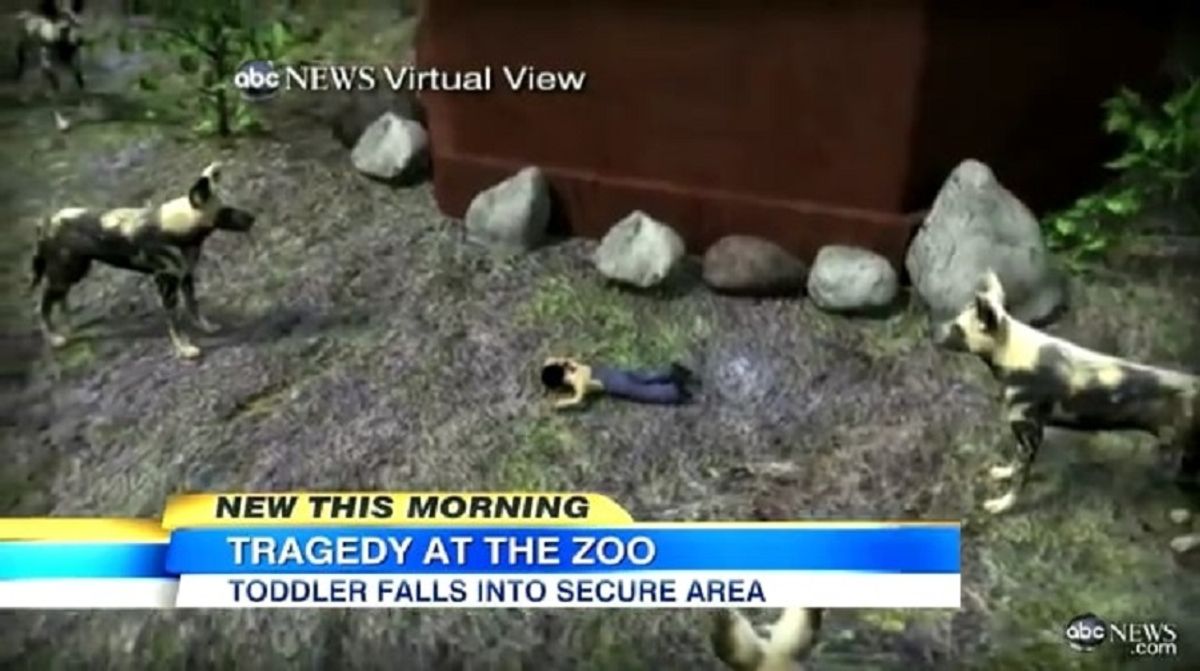 Claim:
A pack of wild dogs attacked and killed a two-year-old child at a Pittsburgh zoo.
Rating:

On 29 July 2018, the junk news site FeedyTV.com reported that a 2-year-old boy had been killed after falling into a wild dog exhibit at a zoo:

The mother wants to take her 2-year-old son a good view of wild dogs, then a "horrific" scene happens.

According the information, the attack happened after the victim’s mother put the child on top of a fence at the edge of a viewing deck. The baby immediately could not keep his balance and fell down into the pit, and he was attacked by 11 dogs.

The FeedyTV story was nothing more than a bad rewrite of a five-year-old article, and it omitted salient details (such as the date), leaving readers with the mistaken impression that it described a recent occurrence. The article on which the FeedyTV piece was based was originally published by the Associated Press back in 2012, and it involved a two-year-old boy who was killed when he fell into an exhibit of wild African dogs at the Pittsburgh Zoo:

A mother's attempt to give her 2-year-old son a better view of wild African dogs turned into a "horrific" tragedy at the Pittsburgh Zoo after the boy fell into the exhibit and was killed by a pack of the animals as relatives and bystanders looked on.

Lt. Kevin Kraus of the Pittsburgh police said the attack happened at about 11:45 a.m. Sunday after the mother picked the child up and put him on top of a railing at the edge of a viewing deck. "Almost immediately after that he lost his balance, fell down off the railing into the pit, and he was immediately attacked by 11 dogs," Kraus said. "It was very horrific."

It's not yet clear whether the boy died from the fall or the attack, said Barbara Baker, president of the Pittsburgh Zoo & PPG Aquarium. Zoo officials at first estimated the boy fell 14 feet, but police said it was 11. It's not clear which is correct.

The child, later identified as Maddox Derkosh, was mauled to death after falling into the enclosure holding African Painted Dogs, described by news reports as endangered animals that are roughly the size of domesticated dogs. His mother had placed him on the rail of an observation deck to get a better view, but the toddler lost his footing and fell into a net meant to catch litter before bouncing off and tumbling to the ground, where he was attacked by the dogs.

After the tragedy, the dogs were removed from the Pittsburgh zoo and placed elsewhere. One of the dogs that couldn't be called off by zoo employees during the attack was shot and killed by police:

The zoo says the dogs won't be coming back. Four were already sent to other zoos, Baker said, and there have been no violent incidents or abnormal behavior.

"We have decided that we're going to send all of the dogs out this year to other zoos and continue to work on conserving them in the wild and working with our partners in the wild," Baker said. "But we won't exhibit painted dogs here, and give the community and the zoo family and the family a chance to heal."

The Allegheny County District Attorney's office announced Thursday their investigation into the incident revealed no criminal conduct on behalf of anyone associated with the Pittsburgh Zoo.