An e-mail published by WikiLeaks referenced not the literal assassination of Antonin Scalia, but what appeared to be a coordinated smear of Bernie Sanders. 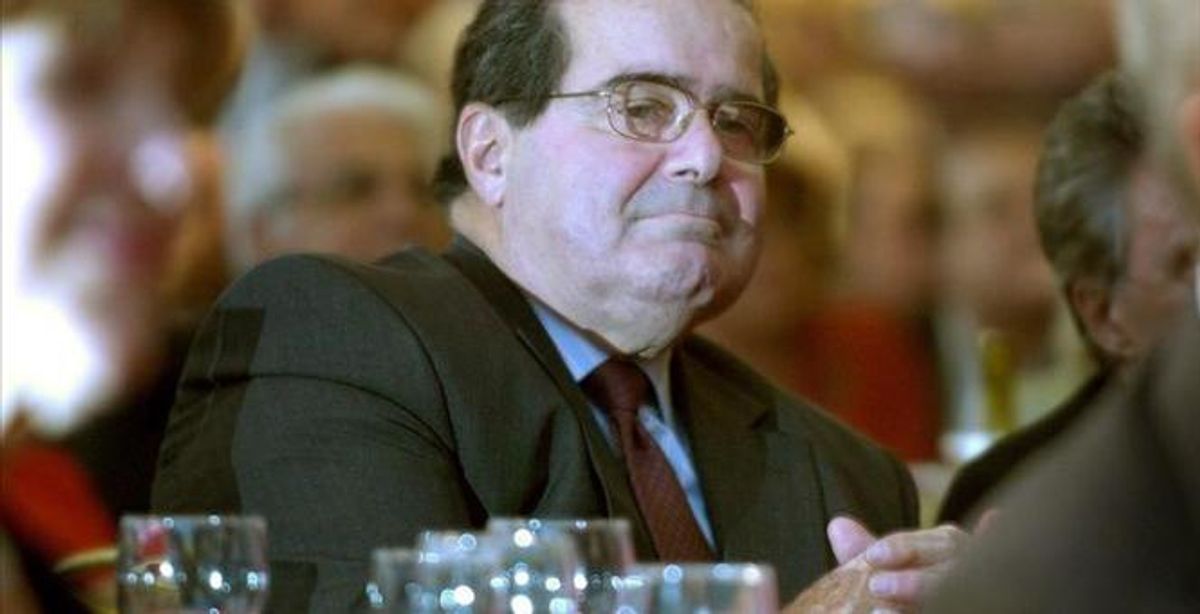 For Trump's sake, please share this to get the word out. The corruption is immense! We need Trump elected to save our country!

The item referenced a leaked e-mail sent on 9 February 2016, four days before Justice Scalia was found dead in his room at a Texas ranch. E-mail in that chain was presented in reverse chronological order (with the most recent reply first) — sender John Podesta initiated the chain at 4:36 PM, and recipient Steve Elmendorf responded at 8:56 PM:

I am all in Sounds like it will be a bad nite , we all need to buckle up and double down

Based on Wikipedia's definition of the term, RedStateWatcher claimed that the "wet works" phrase used in the otherwise vague e-mail was incontrovertible proof it referenced a literal assassination:

Claims that Scalia was assassinated were not novel, as within a day of his death conspiracy theories about the manner in which he died swept social media. And the newly-leaked document was contemporaneous to Scalia's sudden passing, heightening concern about the use of the term "wet work" (or "wetwork").

However, dictionaries present a broader picture of the term and its applied uses: Conservative websites gleefully denounced Chelsea the “attack dog.” Democrats, meanwhile, wrung their hands over why she of all people would be dispatched to do this kind of wet work. (As strategist Brad Bannon told The Hill, “This makes Chelsea just another political player in the arena, and if I was Chelsea, that’s not where I’d want to be.”) And a media bored to sobs with the Democratic primary leapt on the episode like ducks on a June bug. Commentators mused endlessly about why the Clinton camp had taken this route and what it meant. (Consensus: nothing good.) Bernie Sanders was repeatedly invited to respond. Bloomberg’s Mark Halperin might have sounded a smidge melodramatic when he asserted, “I have covered the Clintons since 1991. It takes a lot to surprise me, and I am stunned watching Chelsea Clinton go on the attack. Stunned. Never seen anything like it.”

In media coverage, "wet work[s]" was being used to describe deliberately obtained unflattering coverage of an opponent. And on the same day that the e-mails supposedly describing an assassination plot were sent, Alex Seitz-Wald penned an article for MSNBC that described Bernie Sanders as a regular attendee of luxurious fundraisers, particularly in Martha's Vineyard. The piece also reported both Bill and Hillary Clinton as performing the same sort of "wet work" as Chelsea Clinton:

The Sanders campaign is all about smashing the alleged stranglehold corporate power has on politics, and the candidate himself frequently touts that his insurgent run is funded by small donations, not wealthy people or outside groups.

It’s been an effective message, and one pro-Clinton forces have tried to muddy by calling attention to Sanders’ ties to the DSCC [Democratic Senatorial Campaign Committee], which is financed in large part by industry PACs. The DSCC used its financial and political power to bolster Sanders and urge Democrats not to challenge him in his 2006 Senate bid, and spent close to $200,000 through various means to aid his election.

Bill Clinton said this week that he “practically fell out of my chair” when he read reports that Sanders had attended the DSCC’s summer donor retreats on Martha’s Vineyard, and Hillary Clinton said Sanders took Wall Street cash “not directly, but through the Democratic Senatorial Campaign Committee.”

The Sanders campaign fired back by calling the charge “disturbing,” “dishonest” and “beyond preposterous,” noting the DSCC also receives small donations and is hardly exclusively funded by Wall Street.

Although MSNBC published the piece on 9 February 2016, the topic of Sanders' DSCC retreats was the subject of e-mails dated 6 and 7 February 2016. In that chain, campaign associates looked to have discovered a photograph of Sanders at such a retreat and brainstormed ways in which to get a member of the press to cover his attendance at a February 2016 DSCC fundraiser (the e-mail appeared to have an appended image of Sanders titled IMG_0692.JPG).

Rearranged in chronological order, the chain demonstrated Hillary Clinton's staffers planning how best to attack her opponent with retreat image and information about the lavish fundraisers:

Tina Flournoy stated Sanders attended a DSCC event in July 2015, and on the date of the "wet work" e-mail (to which Podesta was also party) Seitz-Wald wrote:

During his 10 years on the Senate, Bernie Sanders has been a regular presence at luxurious Democratic fundraising retreats, according to more than a half-dozen lobbyists, donors and former Democratic Senatorial Campaign Committee staff members with whom he attended the events. Sanders most recently appeared at one last July, shortly after he announced his presidential run.

Sanders’ connection to the DSCC has become a issue in his heated primary contest with front-runner Hillary Clinton, who has struggled to explain her close ties to Wall Street and the large speaking fees she’s been paid by Goldman Sachs and other banks. Sanders has made Clinton’s relationships with the financial industry a key point of contrast on the campaign trail.

On 13 February 2016, Clinton campaign operatives e-mailed about continuing to use the fundraisers as a smear:

We have gamed out this hit and don't think it works on debate stage (see Milwaukee debate as example). But hit him all the time on being at DSCC retreats on Martha's Vineyard with lobbyists every year. Finding that it harder for him.

Rearranged into the context of Antonin Scalia's death, the use of the term "wet work" was presumed by many to mean literal assassination. But e-mails between staffers just prior to the 9 February 2016 document revealed planning for a coordinated effort to plant a negative story about Sanders in the press in the days prior to the 9 February 2016 e-mail and article. On the date Podesta discussed "wet work" with Elmendorf, MSNBC published the coverage sought by Clinton's staffers on 6 and 7 February 2016. As such, the most likely victim of the "wet work" was not Scalia, but Sanders.