Does a Photo Show 'Widowed' Penguins Consoling Each Other?

A photograph worth a thousand feels. 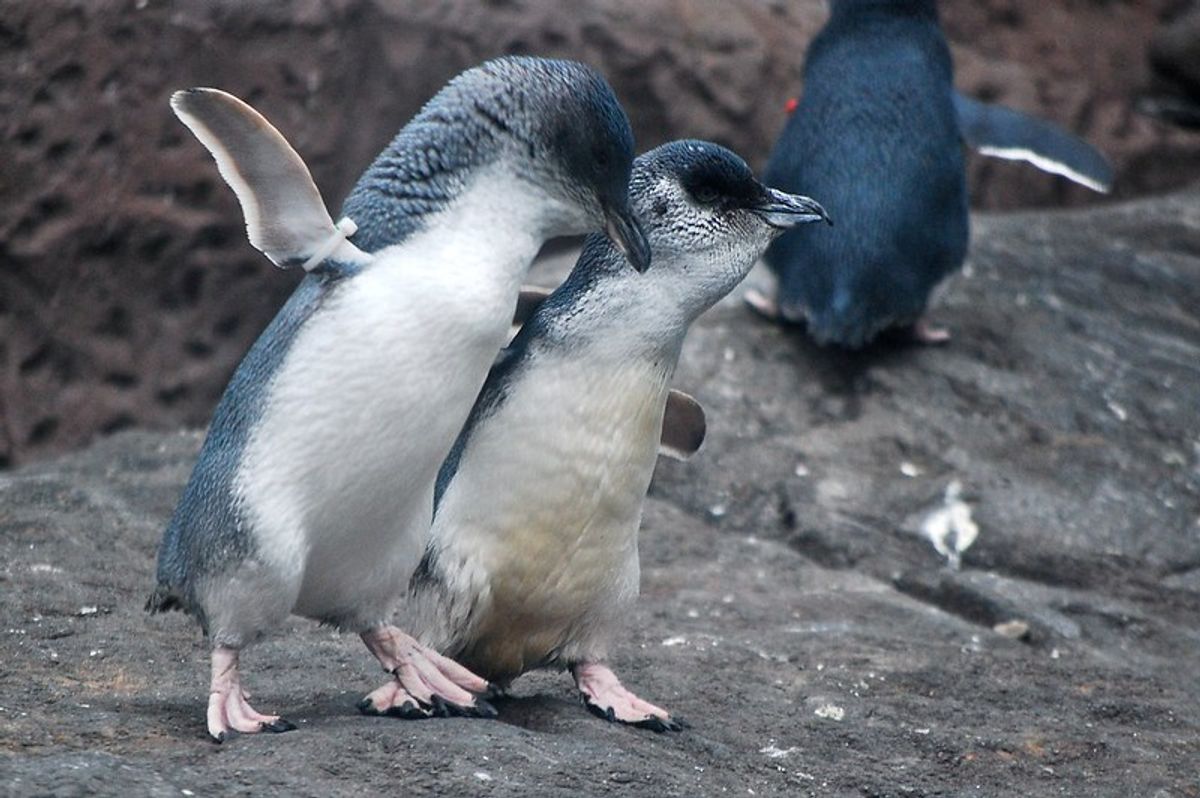 Claim:
A photograph shows two “widowed” penguins appearing to console each other while gazing at the city lights in Melbourne, Australia.
Rating:

Captured by photographer Tobias Baumgaertner in early 2019, the photograph was authentic.

The relationship between the two penguins and their emotional state in the photograph remains unclear. The suggestion that the two birds were “widowed” was based on speculation.

An award-winning photo circulated on the internet in mid-December 2020 appearing to show two “widowed” fairy penguins consoling one another as the duo romantically gazed at the city lights of Melbourne, Australia.

Captured by Tobias Baumgaertner, the photograph was dubbed the community choice winner in the 2020 Ocean Photography Awards for Oceanographic Magazine and made headlines after receiving the award. But were the two penguins really widowed and comforting each other? That remains to be seen.

“I originally intended to capture an image that shows the pressures that human developments can have of wild animal populations,” said Baumgaertner, who added that the two fairy penguins were surrounded by hundreds of others at their rocky territory near St. Kilda. “This image is so much more. It communicates togetherness and love.”

The photo was first taken in early 2019 and shared on Instagram on March 25, 2020. In the original caption, Baumgaertner noted that he had spent hours observing the two penguins “flipper in flipper” when a volunteer approached him, saying that the white penguin was an “elderly lady who had lost her partner and apparently so did the younger male” pictured on the left side.

“Since then they meet regularly comforting each other and standing together for hours watching the dancing lights of the nearby city,” wrote Baumgaertner.

But in the months since the photograph was shared on social media, the photographer said that he had been advised by the scientific community that anthropomorphizing animals can have a negative influence, especially those living in such close proximity to urban areas.

“I previously shared these penguin images to spread love because that, I believed, is what the world needed most right now,” wrote Baumgaertner in an April 24 Instagram post. “It was never intended to be scientifically accurate as it was quite obviously romanticized by adding my personal feelings of being separated from and longing for the one I can’t live without.”

Snopes spoke with Vikki McCloskey, a biologist and curator of the Steinhart Aquarium at the California Academy of Sciences, who said that the above footage showed preening and vocalizing, both of which are behaviors typical of a bonded pair. She added that it is entirely possible that, if both birds lost their partners, they may have re-paired with one another.

Most male and female penguins form lifelong pairs, and couples will split incubation and chick-rearing duties. But to claim that a pair is “monogamous” is incorrect.

“Though penguins are colonial birds that tend to form strong pair bonds, there are always 'shenanigans' going on in a colony. The reason the birds ultimately 'couple up' is because incubating an egg and feeding chicks is a two-bird job,” explained McCloskey.

“Just like human partners, if everything is going well — holding territory, producing fertile eggs, raising offspring successfully — the pair will stay together. Sometimes they 'break up', sometimes they 'cheat', sometimes one dies — none of this means they won't find a different partner.”

The Little Blue, or fairy, Penguins are so named for their petite size. Characterized by their distinct indigo-blue coloration, fairy penguins are the smallest of all penguins. Their scientific name Eudyptula means “good little diver,” according to the Aquarium of the Pacific. The blue-hued birds do not migrate but spend their entire life in their Australian, Tasmanian, and New Zealand grounds foraging in shallow inshore waters.

Though the small aquatic birds live near large populations of humans, they are considered a species of least concern with a global population size of nearly 500,000 breeding adults. Overall, the species is considered stable but populations vary depending on the region where they are located. By and large, the largest threats to the fairy penguins are climate change and human disturbances.