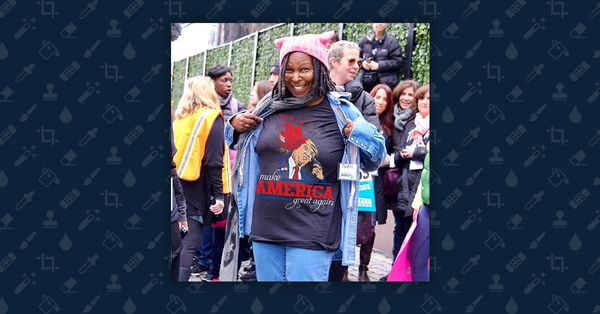 In May 2017, comedian Kathy Griffin drew criticism from across the political spectrum when she posed for photographs holding what appeared to be President Donald Trump's severed head. Soon after, images purportedly depicting actress and talk show host Whoopi Goldberg proudly wearing a shirt with a violent anti-Trump image circulated on social media: The image appeared on a meme alongside a demand Goldberg be "fired from 'The View' and boycotted." In late May and early June 2017 social media users shared the image and referenced Griffin's controversy. (Griffin surmised that her career was "over" after the incident, and she was fired from her intermittent position at CNN.)

@kathygriffin Whoopi says on 'The View' today that it was a vile thing that u did to Trump.Wasn't funny, even she didn't like it. pic.twitter.com/ZDj154gs4G

However, the photograph antedated the Griffen controversy. In an 18 April 2017 video published to the official YouTube channel for "The View," Goldberg explained that someone had doctored an image of her at the 2017 Women's March that followed Trump's inauguration:

In the clip, the original photograph of Whoopi Goldberg was shown alongside the doctored version. In the unaltered photograph of Goldberg, her shirt read "And you thought I was a nasty woman before? Buckle up, buttercup": In the April 2017 segment, Goldberg said that despite her opposition to President Trump, she would never wear a shirt like the one in the altered image.