Did Whoopi Goldberg Say 'Military Widows Love Their 15 Minutes in the Spotlight?' 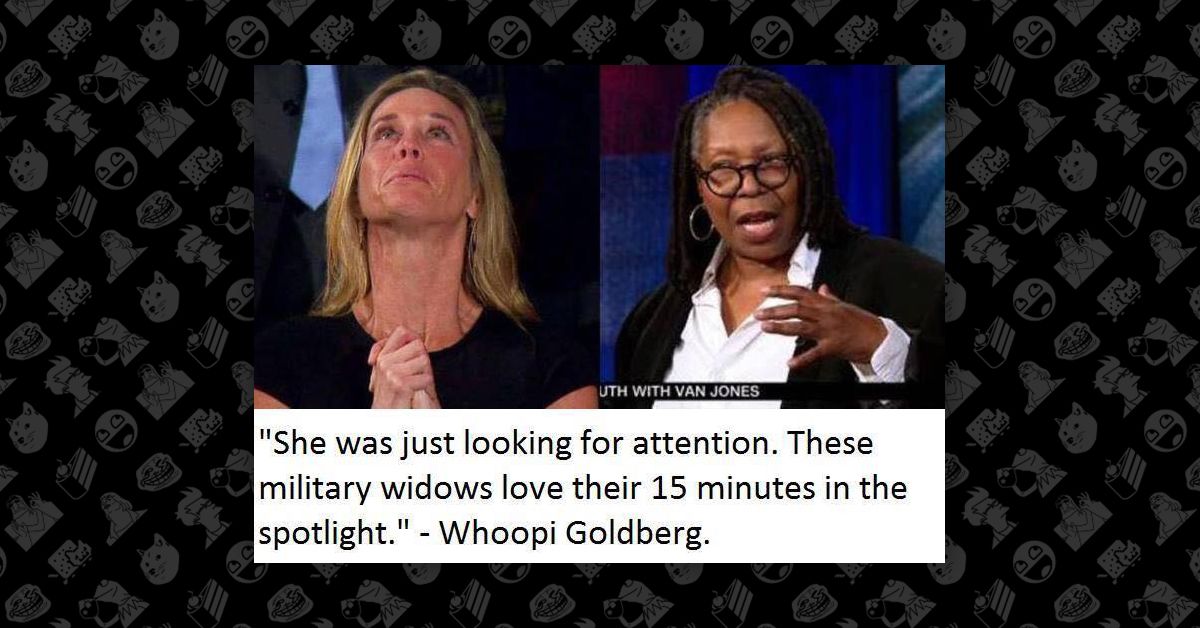 On 2 March 2017, an image graphic featuring a photograph of Carryn Owens (the widow of Navy SEAL William "Ryan" Owens who was killed during a raid in Yemen) and Whoopi Goldberg (actress and television host) circulated on social media. The graphic included a quote ostensibly uttered by Goldberg, holding that Gold Star widows such as Owens (who had recently been honored during an address delivered by President Trump to a joint session of Congress) were "just looking for attention" and "love their 15 minutes in the spotlight": However, these words were not spoken by Goldberg; they originated with an article published by a fake news web site called The Underground Report:

Whoopi Goldberg is in hot water after comments she made regarding the Navy SEAL widow that was honored during President Donald Trump’s historical speech.

“She was just looking for attention. These military widows love their 15 minutes in the spotlight”, Goldberg said.

“If it were me I wouldn’t be able to leave the house. How can someone who is truly greiving [sic] go out there and be on TV. It just doesn’t make sense to me."

Goldberg and the other hosts of The View did discuss Carryn Owens during an episode of the talk show that aired on 1 March 2017. However, Goldberg did not say that Owens loved her "15 minutes in the spotlight" during that segment. Rather, when The View co-host Jedediah Bila criticized President Trump for using Mrs. Owens as political prop, Goldberg agreed, adding that while it was sometimes important to put a face on tragedies such as the Sandy Hook shooting, "no parent does this stuff for publicity":

Bila: "I agree with you though about this concept of politicians using people as political props. I hate that. I hated that last night. I hated it even when President Obama signed the health care law.

Goldberg: "Except sometimes, as with the Sandy Hook parents, it's important to put a face on it. But when you have a Republican congress that basically said that these parents were doing this for publicity."

Bila: "Not the parents. I never blame the family."

Goldberg: "No no no. What I'm saying is when you have people making those kind of statements. You want people to take a look at these parents. No parent does this stuff for publicity."

The Underground Report did not carry a disclaimer labeling its content as fiction and instead attempted to pass itself off as a legitimate news site, declaring that it was "dedicated to bringing the truth to the public." However, the web site had already published multiple fabricated stories in its brief history (it was created in February 2017) that demonstrate a penchant for fake news, including "Former White House Aide: Obama 'Is a Gay Man,'" "OBAMA MOBILIZING REFUGEE ARMY FOR MEXICO," and "Obama Sold US Secrets to N. Korea."

Shortly after this article about Whoopi Goldberg was published, The Underground Report added the following disclaimer at the bottom of their web site:

Underground News Report is a news and political satire web publication, which may or may not use real names, often in semi-real or mostly fictitious ways. All news articles contained within Undergroundnewsreport.com are fiction, and presumably fake news. Any resemblance to the truth is purely coincidental, except for all references to politicians and/or celebrities, in which case they are based on real people, but still based almost entirely in fiction. Undergroundnewsreport.com is not meant for individuals under the age of 18.

On 13 March 2017, Whoopi Goldberg disclaimed the fake news story about her and discussed addressing defamatory aspects of fake news through lawsuits and legislation: